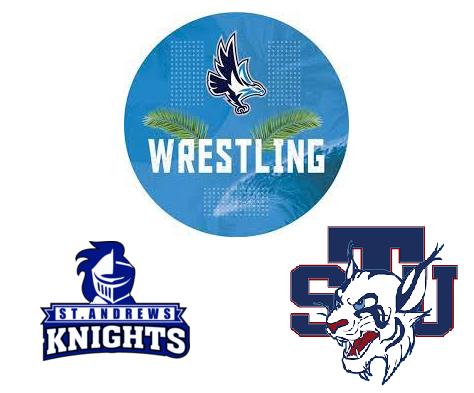 It is three Florida teams in Florida wrestling this upcoming Thursday as the Keiser Seahawks host the St. Andrews Knights & the St Thomas Bobcats. One of the only wrestling duals where you won't have to bring your jacket! While the wrestling action will be hot and exciting there are two matches in particular to look out for as the teams do battle.


Pennsylvania native Patrick Gould became the Seahawks first Mid-South Conference South champion last season. He will be immediately tested right off the bat when he faces the Bobcat's David Pierson. A native of Indiana, he was 4th in the MSCS last season & will looking to knock off the home crowd favorite on his own turf.

Another good match that will take place in this triangular is Logan Sage Vs Earnest Johnson. While Sage was 3rd in the Appalachian Athletic Conference last season, Johnson was 3rd in the MSCS.  Johnson was also one match shy of All American honors at the NAIA championships. A win for Johnson would be big for the Tampa native & a win for Sage would be big as well. Both of these guys are southern boys (Sage is from Georgia) looking to represent that wrestling in the south has grown exponentially.
Posted by Stephen Stonebraker at 6:22 PM