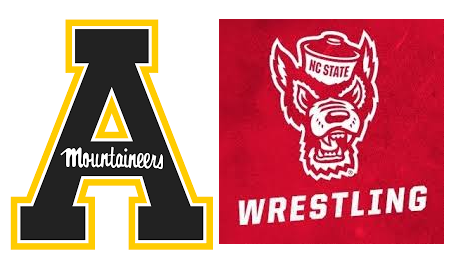 The NCAA DI season is upon us & we're gonna start it off with a great dual between two of our top programs from the Carolina to the north. It's the Appalachian State Mountaineers taking on the North Carolina State Wolfpack in some SOCON Vs ACC action.

Here are the best matches of the evening....

Starting things off at our smallest weight class, we have a one time NCAA qualifier taking on a two time NCAA qualifier. While these two have never met, on paper Trombley has a slight advantage as he has victories over opponents that have defeated Smith. With the enormous amount of parity within collegiate wrestling, it's not always wise to completely put your stock into such results. Nevertheless they are there to make of what you will. This will be a good match.


This will also be the first meeting between these two talented lightweights. Both of these guys have been NCAA qualifiers thus far in their careers, as both look to improve upon their status. Carter has something to prove after being a back up to Codi Russell last season. A win over Orine would certainly be a statement. With that said, ranking does highly favor Orine.


This match most certainly favors the Wolfpack & I do believe that the W here will go to Jack. However, I can see Gonyer giving Jack a much better match that anticipated. Gonyer can be tough on top and difficult to escape from a times. This could be where he surprises the audience in Raleigh.
The last time these two met on the mat, Scott took a 18-7 major decision. The match will once again favor the Wolfpack, but I do believe that Bond has the ability to keep it to a decision this time.


This match favors the Mountaineers as it gives a sophomore who has thus far spent his career as a backup the chance to pull off what would be one of the first major upsets of the season.  At last year's Southern Scuffle, although the two did not meet, Formato took an impressive 4th place as Cates finished one match shy of a top eight showing. Cates lost in the R12 to R.J. Mosley of Gardner Webb 5-1, who later defeated Formato 5-2 in the semi-finals of the SOCON championships. This match presents a major opportunity for Cates to show he belongs within the rankings.


Fiscella already owns a 6-3 decision over Houghton so an upset here would not be as farfetched as the rankings suggest. Nonetheless a lot can change over time & I would say this match still favors the Wolfpack.

Posted by Stephen Stonebraker at 8:47 PM