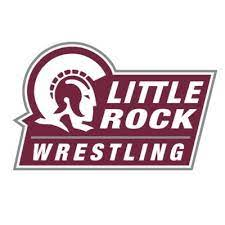 Perhaps not geographically, but I would think demographically, Little Rock is still our most "southern" NCAA DI wrestling team. A program that represents our dedication and determination to grow wrestling in the south. I can say I honestly see the Trojans having up to three NCAA qualifiers this season. One who has one heck of a challenge in front of him, but CAN win a PAC-12 title.


Tyler Brennan capable of NCAA qualification this season? Most Certainly.  A tough wrestler with an impressive win over Evan Barczak of Drexel last season.

Go figure that Triston Wills is in one of the PAC-12's most competitive weight classes, but hey, the harder the weight class the more prestige the title. Do I think Wills can win a PAC-12 title? Yes, I do. He was 3rd in the PAC-12 last season, one match shy of NCAA qualification. Among his victories Andrew McNally of Wisconsin, Thomas Flitz of Applachian State, Mason Kauffman of Northern Illinois, Albert Urias of CSU-Bakersfield & Aaron Olmos of Oregon State.


Another Trojan that will fight for NCAA qualification this season will be Josiah Hill.  Among his notable victories last season, Colton McKiernan of SIUE & Jacob Seely of Northern Colorado.
Posted by Stephen Stonebraker at 8:24 PM