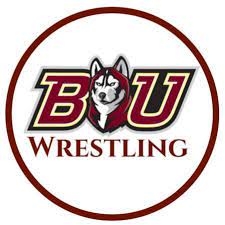 This could be an historical year for the Huskies as they have the potential to crown their first ever MAC champion. The competition is fierce, but they are in a position to do so.  Note that I'm not sure of the current whereabouts of Alex Carida, a two time MAC place-winner & I want to throw in a word for Willy Gerard. A EWL champ in 2019, his career was plagued by injuries. It's really a shame because if healthy, it's likely that Gerard would have been one of their top stars of the past few seasons.


We cold very well be looking at Bloomsburg's first MAC champion here.  20-11 on the season last year, Josh Mason finished as the MAC runner-up. He's already proven that he can beat Gabe Willochell of Edinboro as he owns a 5-3 decision over the Fighting Scot.
Posted by Stephen Stonebraker at 7:01 AM