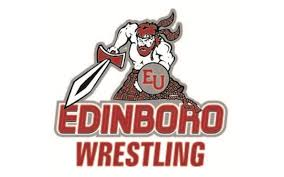 Robert Stack would have a heyday with Edinboro as the mysteries of Fighting Scot wrestling remain unsolved as we head into the 2022-2023 season. I no more know the current status of three time NCAA qualifier Jacob Oliver anymore today than what I did a year ago at this time. To add to the confusion, Ty Varndell is now missing without a trace as well. As to the bright side, the talent that is returning is looking good. Could be looking at as many as four NCAA qualifiers, two of which will contend for MAC titles.

An NCAA qualifier for the Scots last season, Gabe Willochell was 22-10 capturing a 3rd place finish at the MAC championships. With a 6-3 victory over EIWA champion Matt Kazimir of Columbia & a 6:54 fall over North Carolina freshman sensation Lachlan McNeil, he will be a front-runner for an MAC title & All American honors this season.


Look for sophomore Ethan Ducca to contend for NCAA qualification this season. He was 14-6 last year.

Another Fighting Scot who will contend for NCAA qualification this season is junior Cody Mulligan. 21-10 on the season last year, he was 6th in the MAC.

While Isaac Reid of Lock Haven will be stiff competition, I would not be surprised at all if Jon Spaulding walks into the MAC the "heavy" favorite to win the heavyweight title.  A MAC runner-up in 2020, he gives the Scots another All American hopeful.


Posted by Stephen Stonebraker at 6:24 PM