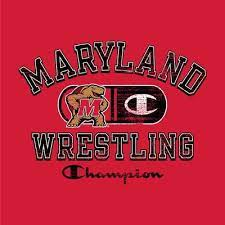 Let's be real here for a second. The past five years haven't been all that great for Maryland Wrestling. We can be honest about that right? That's an accurate statement. There were positives last year that give reason to be optimistic about the future. The Terrapins did a good job on recruiting & I think that'll reflect with some of their redshirt freshmen this season. Only thing that doesn't make sense to me right now, is the current whereabouts of Kyle Cochran.  He most certainly has one more year of eligibility if not two. He looked outstanding various times last season & even gave Maryland a hope for an All American. I do think this will be a turning year for the program & it'd be all the more so if Cochran was back.


Among those redshirt freshman to look forward to I was speaking of, Braxton Brown is one of them. 16-5 on the season last year he had victories over Jacob Allen of Navy, Luke Werner of Lock Haven & Jace Koelzer of Northern Colorado.


26-6 on the season last year, add Ethan Miller to the list of Maryland's redshirt freshmen to look out for. Among his notable victories, Anthony White of Rutgers & a tech fall over Anthony Brito of Appalachian State.


He didn't wrestle a full season last year, but I am anxious to see what he'll do when he does. Among his victories thus far, John Martin Best has bested Alex Facundo of Penn State.

And here is the redshirt freshman I am most excited to see this season for Maryland. 23-6 on the season last year Jaxon Smith had impressive wins over Matt Correnti of Rider & Garrett Joles of Minnesota.

A career plagued by injuries I was very happy to see that Jaron Smith was awarded a medical hardship for an extra year of eligibility. The 2022 NCAA qualifier was 20-15 on the season last year & will be a leader among a very young Terrapin wrestling team.


Posted by Stephen Stonebraker at 1:07 PM