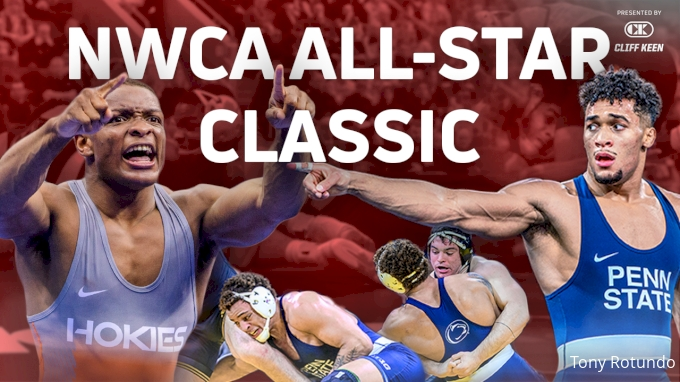 The NWCA All Star Classic is back & what a list of main event matches it'll be! Some of the top wrestlers in the nation going head to head in Austin, Texas on Tuesday November 22nd. For some of these phenomenal athletes this will be their first competition of the season. For others it'll be their second or third. For example Minnesota will have already competed at the Bison Open as well as probably one dual meet. There will also be some great women's matches on the card & while a couple have already been announced, we are still awaiting the announcement of other matches.

Let's take a look at the men's matches.

Let's not B.S. each other here. The pinnacle at 125 lbs this season is to be the man walking out of the other tunnel to face Iowa's Spencer Lee as he goes for NCAA title #4. While their are no guarantees in wrestling & anything is possible, as of the right here & right now, that is the goal. Both McKee & Courtney are candidates to do just that.  Both two time All Americans, Mckee 3rd & 5th Vs Courtney 2nd & 6th, McKee has won their only meeting 8-3. Whoever wins this match is making a statement.


Another match of two talented two time All Americans. Lucas Byrd of Illinois who has finished 5th in the nation the past two seasons & Arizona State's Michael McGee who has been 6th & 4th. The two have only met once thus far in their careers with Byrd securing a fall in 6:17.


There's a lot on the line for both of these outstanding athletes. By working hard, believing in himself & listening to his coaches Pittsburgh's Cole Matthews went from a respectable top 25 wrestler to an All American who will be a top contender for an NCAA title this season. As in all sports, he'll have his doubters & his critics, which is why a win here is so vital as he heads into the rest of the season.  On the same hand, Real Woods has a tremendous amount of pressure on his shoulders as well. The black & gold have thus far welcomed him with open arms but spend two minutes on the official Hawkeye Wrestling fan club facebook page & you'll know no spacecraft ever built by man will ever reach the heights of their expectations. They are expecting big things out of Woods this season & it all starts here at the NWCA All Star Classic. A win over Matthews would make 1/1 on delivery.


They say in sports beating someone three times in a row is one of the toughest things you can do. It was considered a huge upset the first time Wisconsin's Austin Gomez upended Ohio State's Sammy Sasso 8-5 at the BIG 10 championships. Then he did it again at the NCAA championships by a score of 6-5. Can the Badger defeat the Buckeye a third time? We'll soon find out.

These two excellent young talents have yet to meet. Both officially per COVID-19 sophomores this season, Missouri's Keegan O'Toole 3rd in the nation in 2021 & an NCAA champion this past season takes the advantage over Wisconsin's D.J. Hamiti who was 6th. Despite the odds, I still say this is going to be an exciting, close matchup.  What a treat it is as a wrestling fan to know that this won't be a one & done deal either. I'll imagine we'll see this feud continue for quite some time. This is simple match one.

Decades ago the wrestling community saw the epic battles of Oklahoma State's Kenny Monday & Iowa State's Nate Carr.  Now here we are all these years later & their sons David Carr of Iowa State & Quincy Monday of Princeton are about to duke it out. This fact alone is enough to hype this match, but there is so much more to talk about. Both Carr & Monday have thus far spent their entire careers at 157 lbs. The move up to 165 will be a first for both.  Both want to prove that they're going to be forces to reckon with just as much at 165 as what they were at 157.  It starts here.  Carr a national champion in 2021 was 3rd last season.  Monday earned his first All American honor, upsetting his way to a runner-up finish. Not only does he want to win this match for himself, but also for Princeton, a school known for its academic prowess that continues to make a name for itself on the mat.


The "Main Event"?  If I had to pick, I think this is going to be it. Two time national champion Carter Starocci of Penn State Vs 2021 NCAA Champ/2022 NCAA runner-up Mekhi Lewis of Virginia Tech. As we talk of great feuds from yesteryear now, in the years to come we'll be talking about all of the great matches between these two. Thus far, these two living legends have met once with Starocci needing a tiebreaker to get past Lewis 6-5. No doubt about it, this All Star Classic confrontation will be to be pun, classic.

At this point two time NCAA champion Aaron Brooks of Penn State with a 50-2 record looks unbeatable & unstoppable. The Nittany Lion's only loss last season was to Olympic Bronze Medalist Myles Amine of Michigan. If you're curious, his only other loss was three seasons ago to Nebraska's Taylor Venz.  Can he ever be beat again? Of course. It's Will he ever be beat again? That's the question. If there's anyone who can do it, I'd say Parker Keckeisen of Northern Iowa is one of those select few people.  Thus far the two time NCAA bronze medalist has given Brooks some respectable matches. A 6-4 decision & a 3-2 decision. While a win for Brooks simply solidifies what many already feel, a win for Keckeisen would be huge. Huge for him, huge for the Northern Iowa program & huge for Coach Doug Schwab.

I tell you what I was impressed with Iowa's Jacob Warner last season. It's no secret to anyone that Iowa graduated a ton of talent last year. DeSanto, Eierman, Young, Marinelli, Kemerer & like it or not I'm gonna say Turk, the black & gold faithful said thank you to six superlative young men whose collegiate eligibility came to an end. Warner well aware of their soon departure went above & beyond, proving to the Hawkeye community that he WOULD be a leader this season. He stepped it up a notch and made the NCAA finals. The only three time NCAA medal winner in his event (7th-4th-2nd), he looks to continue his leadership wining ways. Odds favor him as he's defeated Wyoming's Stephen Buchanan twice already by scores of 6-4 & 6-3.  Yet, as said before, it's difficult to defeat someone as good as Buchanan three times in a row.  Not only that but the two time All American (8th & 3rd) is every bit as hungry as is Warner.  Penn State's Max Dean is currently king, but he doesn't seem to have the stronghold that teammate Brooks does on the weight class. I personally believe it is much more open. Both Warner & Buchanan are contenders. Let's see who wins this classic.

Gable Steveson left his shoes on the mat & made it clear that his NCAA collegiate wrestling career is a said and done thing. Well aware that he might Rowdy Piper us & make a return, but as for right now, I'm treating it as if he will NOT be back this season. With that said, the hunt for an NCAA title I believe is between four gentlemen. Iowa's Tony Cassioppi & Penn State's Greg Kerkvliet being two of them. (The other two? Arizona State's Cohlton Schultz & Michigan's Mason Parris).  Both Cassioppi & Kerkvliet are two time All Americans with the Hawkeye having 3rd & 7th place finishes & the Nittany Lion with 7th & 4th.  Going into this match, Cassioppi is the odds on favorite already being 3-0 against Kerkvliet, but it should be noted that Kerkvliet has closed the gap. Getting completely dominated 9-0 in their first meeting & getting fairly well handled 7-2 in their second, he took Cassioppi into overtime the last time they met, falling 6-4.  As the war wages between the black & gold and blue & white over who truly are the Gods of NCAA wrestling, speaking specifically to 2022-2023, this match has a lot on the line.

Man what a great event this is going to be!! It'd be nice to think that holding such an event in Austin, Texas might have a positive effect in maybe seeing more collegiate wrestling pop-up in the Lone Star Star. Of course we would all love to see the Longhorns of Texas field a varsity team as well as nearby Texas State over their in San Marcos, but we should also be focused on getting wrestling into some smaller Texas colleges/universities as well.

Hell, Huston-Tillotson an NAIA school even announced years ago that it WAS going to field a wrestling program. Not sure what happened there, but it never came to fruition.  It'd be a great spot for both a men's & women's program.

St Edwards would be a great spot for some NCAA DII wrestling.

Concordia (TX) would be a great spot for some NCAA DIII wrestling, as would be Southwestern (who believe it or not, did field varsity wrestling at one point).

Point is, a city the size of Austin should have some collegiate wrestling opportunities.  They have schools in DI, DII, DII & NAIA.  No excuse that none of the above have wrestling.

Posted by Stephen Stonebraker at 9:38 AM