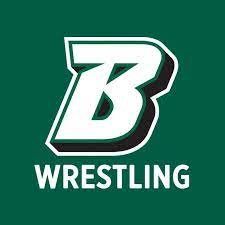 It amazes me how much history is going to be made this wrestling season. Among the many great things we'll see, Binghamton has the chance to crown their first four time EIWA champion. Along with this amazing milestone, I see the Bearcats qualifying at least six to the NCAA championships.  Gone is four time EIWA place-winner & two time NCAA qualifier Joe Doyle.  I'm not sure of the current status of Zack Trampe, a two time NCAA qualifier who I believe has another year of eligibility left.


An NCAA qualifier in 2021, Micah Roes took a 4th place finish at the EIWA championships. He will once again contend for NCAA qualification this season.


15-14 on the season last year I believe Anthony Sobotker can not only earn a top 8 EIWA finish this season but also make the NCAA championships. Impressive wins include falls over Sammy Alvarez of Rutgers & Anthony Mininno of Drexel as well as a 5-4 decision of Purdue's Matt Ramos.


Former NCAA DIII wrestler Ryan Anderson had a pretty respectable 14-8 record last season in his first attempt at NCAA DI wrestling. 6th in the EIWA, he had impressive wins over both Thomas Deck of Army & Matt Kazimir of Columbia.


Sophomore Brevin Cassella earned his fist NCAA qualification last season with a 5th place finish at the EIWA championships. His most impressive win, a 9-0 major decision of Columbia's Josh Ogunsanya. 165 all of last year, this season he bumps up to 174.


Two time NCAA qualifier Jacob Nolan will go for his third qualification this season. 20-15 on the season last year, he was 4th in the EIWA.


The leader of the pack, Louie DePrez has a golden opportunity this season to become the Bearcats first four time EIWA champion. Along with this outstanding milestone, he will also be looking for his second All American honor, having placed 8th in 2021. 5th-6th-7th at the CKLV he'll be looking for a fourth medal there & with 3rd & 1st place finishes thus far as the Southern Scuffle, add another title he may win there. 96 victories thus far, he'll go well beyond win #100.


13-8 on the season, Cory Day will be looking for another EIWA top 8 finish as he finished in 8th place last year.


Posted by Stephen Stonebraker at 1:04 PM