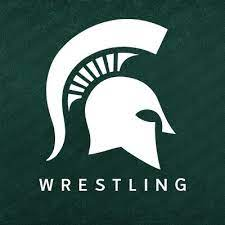 When it comes to being negative in the sport of wrestling, you're never short a volunteer. When Michigan State was struggling it seemed you could go just about anywhere & comments like, "BIG 10 basement dweller" & "Will they even qualify anyone to the NCAA's?" were not hard to find. Yet now that the Spartans are starting to turn things around, the credit & recognition for improvement is in a Where's Waldo book absent of Waldo.  I'll give the Spartans the recognition.  Not saying necessarily that they will, but talent and potential wise? 2022-2023 could see all 10 varsity wrestlers make the NCAA tournament. Two with a very good shot at being All Americans.  Graduated is Jacob Tucker, a two time NCAA qualifier who never found his potential due to the unfortunateness of injuries. Let's keep in mind as we remember his career, he's one of the few to hand NCAA champ Ryan Deakin of Northwestern more than one loss.


I think either one of these guys has a shot at NCAA qualification depending on who wins this wrestle-off. Sophomore Tristan Lujan was 13-13 on the season last year, finishing one match shy of placement at the Southern Scuffle. Benny Gomez, a transfer of Presbyterian was one of the Blue Hose's best wrestlers & will give Lujan a run for his money for the varsity spot.


A four time NCAA qualifier, RayVon Foley has already collected 103 varsity victories. A Reno runner-up in 2019 as well as 7th in the nation, he was a Southern Scuffle champion last year.


An NCAA qualifier in 2021, Jordan Hamdan finished one match shy of a top eight finish at the Southern Scuffle.


After having a pretty good 20'-21' season qualifying for the NCAA championships, I was surprised how much of a slump Peyton Omania was in last season. Hopefully he's out of it & we'll see some good things from him this season. With that said, he'll be challenged for the spot by Eddie Homrock, 10-5 on the season, with a R12 finish at the Southern Scuffle.


26 victories for the Satellite last season as he earned his second NCAA qualification & runner-up honors at the Southern Scuffle.


Anxious to see the overall improvements of sophomore Caleb Fish this season. 22-14 on the season last year, he looked very tough throughout different times in the season. One match shy of a top 8 finish at the Southern Scuffle, he had a very impressive win over All American Zach Hartman of Bucknell.


Former Illinois Illini D.J. Shannon has decided to continue his career as a Spartan. Among his notable victories a 4:55 fall over Andrew McNally of Wisconsin & a 7-6 victory over Adam Kemp of Cal Poly.


Heading into his junior season, Layne Malczewski is already a three time NCAA qualifier. An impressive 2:21 fall over All American John Poznanski of Rutgers, he was 5th in the Southern Scuffle this past season.


Ma Gawd there is a lot of talent heading into their final seasons of collegiate eligibility yet to earn an All American honor.  Cam Caffey is definitely one of the best. A four time NCAA qualifier, he has earned BIG 10 runner-up as well as Southern Scuffle bronze during his career. Among his victories he owns a 3-2 victory over NCAA champ Max Dean of Penn State, a 12-4 major decision of All American Greg Bulsack of Rutgers, a 7-2 victory of Rocky Jordan of Ohio State, an 8-6 victory over Tanner Sloan of South Dakota State & he's defeated Thomas Penola of Purdue twice. Due time to AA & slots 1 through 8 are ALL available.


An NCAA DII champion for McKendree in 2021, Ryan Vasbinder had a pretty respectable 15-7 record. He will contend for NCAA qualification this season.


Posted by Stephen Stonebraker at 7:57 AM