Ramirez has pulled off some very impressive upsets this season which has lead him to his #9 ranking. Conigliaro has done quite well himself, proving to be a top 12 wrestler. This will be a good match.

The last these two met Foca was able to stick Kim in the first period.  Will he have another dominating victory over the Crimson or will this match be closer?

The last these two met, Fernandes was able to pull off a fall quickly into the third period. Although Slavilouski is currently unranked at the moment, I do believe this could be a very close match. Slavilouski did take CKLV runner-up honors earlier this season with victories over Lucas Davison of Northwestern & Tate Orndorff of Ohio State. 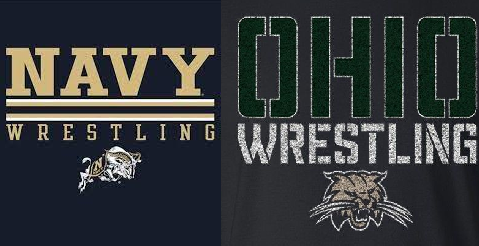 This has the potential to be a really fun match.  Both of these guys are 4-0 against the exact same opponents. Cerniglia likes to rack up more points, while Slivka tends to keep the matches a little closer.
184 - #33 David Key Vs U.R. Zane Lehman

At 17-3, I'm a little surprised that Lehman hasn't made his way into the rankings yet.  If he can pull off this winnable, but not guaranteed victory over Key, it should just barely put him in there. On the same hand though, Key as inconsistent as he is, has some impressive victories this season himself. He recently defeated Charles Small of Hofstra and even more impressive he defeated #27 Layne Malczewski of Michigan State 10-4. 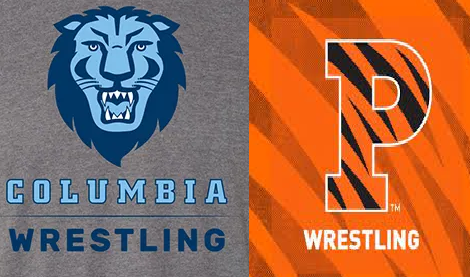 The first two times that Manchio and Glory met, the Tiger dominated the Lion 19-1 technical fall and 15-0 technical fall. It was an absolute massacre. Yet the third time the two met, Glory only came away with a 3-0 decision. Wanting to uphold his image of domination, Glory is looking for a repeat of the first two matches. Manchio is out to prove that he can hang with one of the guys that the wrestling world is calling a potential NCAA champion.

Neither one of these guys are ranked at the present moment, although I do believe Fine will be if he keeps wrestling like he has as of late.  The last these two met Dugan scored a 7-4 decision, but I believe the outcome could be much different today.  Fine has made some major improvements.

Jordan pulled off a 7-6 decision over Surtin the last time the two met & what a treat it would be for both Jordan and the Jackrabbits if he were to do it again.  I have a feeling though that it'll be a much harder task this time around. Surtin has been wrestling exceptionally well lately, coming off of a win over Joey Prata of Oklahoma. Jordan has been more up & down all season, his best victory a 5-2 decision over an injured Liam Cronin of Nebraska.

Ranking and results, Hart has the advantage over Carlson going into this match.  He not only owns a 2-0 victory, he also owns a 14-4 major decision.  At this point it certainly seems that Hart holds all the cards, but I can't help but feel that Carlson may have an Ace in the hold.  We'll see what happens.

The way the O'Toole has been wrestling this season, I imagine that we'll most likely see nothing short of a major decision here, but Cook may surprise us and keep this match to a decision.

You gotta be looking forward to this one. A rematch of the Southern Scuffle finals where DeVos edged Mocco 3-2.  It's "proof  I WAS the better man" vs "Revenge is sweet." May the best man win!

I'm beginning to think that Coach Bono must really like the name Tanner.... I digress.  The last these two met Elam won hands down, no problem 10-4. It certainly looks like we could see a similar result today, but Sloan from time to time can be a very dangerous wrestler. Even in situations like this, I never feel good betting against him. 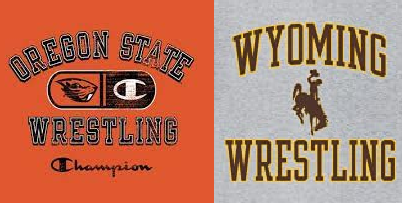 Kaylor has thus far pulled off two major decisions over Svihel by scores of 14-5 and 15-7. Anxious to see if he can pull off a third today, or if Svihel might keep this one to a decision.

So much about this match screams that it should be no less than a decisive decision for Turner, if not a major decision. Yet every now and then Greenwood will pull something straight out of Francis the Talking Mule. Let's keep in mind that Arizona State's #4 Michael McGee has lost but twice this season, once to #1 Roman Bravo-Young.  His other loss? Greenwood.

Here's another match that should be cut and cry, clear as day but might not be. Willits who owns a 19-1 technical fall & then was racking up points like no other when he stuck Zollman at 3:08, should have no problem with the Cowboy today. Yet like Geenwood, Zollman occasionally has tricks up his sleeve. Do I see it happening against Willits? No, but I am aware of its potential.

There's something in the water in Laramie. There has to be.  This is yet another match where despite the decisiveness of the last outcome, I'm left in question of todays' outcome. Crooks had his way with Jensen the last they met in a 19-9 major decision. Yet even more so than 133 & 141, I can see this one being much different today than what it was last time. Jensen is not the same wrestler he was a year ago. He's already proven that by defeating Triston Lara of Northern Iowa 5-2, who manhandled him last season 18-8.  Even in his losses, he's looked so much better this year than what he did last.  Take nothing away from Crooks, who may very well win this match, but there's no denying Jensen's improvements.  He's three matches away from having the best season he's ever had.

I'm a big fan of both of these guys. What they both have in common is that they have both been overlooked and disrespected during their careers. Both of these guys wrestle with chips on their shoulders.  Looking very forward to this match.

Hastings ended this one with six seconds left to go in the first period the last the two met. I don't see the match ending in a fall this time. In fact, I only see  a decision.

This is a match I'm looking very forward to.  Two evenly matched guys going at it in a match that could go either way.  Munoz won last time 3-2.

Gas tank Gary Vs Brian Andrews. A match that came down to sudden victory with Traub winning 3-1 the last the two met on the mat.  Two very fun heavyweights going at it.

DePrez owns a first period 1:47 fall over Rogers, but the other time the two met Rogers held DePrez to a 5-1 decision. Rogers is one of those good wrestlers, currently outside of the rankings that could very well be top 33 by season's end. I think he can give DePrez another respectable match today.

This match interest me for a multitude of reasons.  ZKW is 3-1 Vs Doyle.  A decisions of 6-4, 9-2 & 7-2 vs a 12-2 major decision loss. ZKW seems to have the upperhand on Doyle as of late, but stranger things have happened in NCAA wrestling. 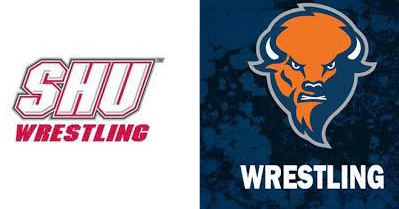 Petrillo came away from this match last time with a convincing 8-3 decision, but I do not see that happening again today. Phipps is a very improved wrestler, including a victory over Penn's Michael Colaiocco and today's match I predict will be much closer.

This is one I've been wanting to see again for quite some time.  Delp won a 9-6 match the last the two met, but even in that win, I didn't feel he was the better wrestler that day.  Maybe he was.  We'll find out when the two meet later today.

With victories over Columbia's Matt Kazimir and Iowa State's Zach Redding, I'm surprised that Willochell hasn't cracked the rankings yet. If he can pull off a win over textbook Quinn Kinner today, he most certainly will crack them.  This is a match that I feel very well could come down to first blood. Kinner is one of those wrestlers that gets in a mode.  If he can start off well, he gets on a roll. Yet if he can't, his offense doesn't seem to flow as smoothly if he gets behind.  Truly think this one comes down to who gets on the board first.

This feud between Walton and Ducca always results in good, hard fought exciting matches. Walton owns a 16-11 decision and Ducca owns a 5-2 decision. Regardless of who wins, hope to see an exciting back and forth match like what they gave in the 16-11 decision. 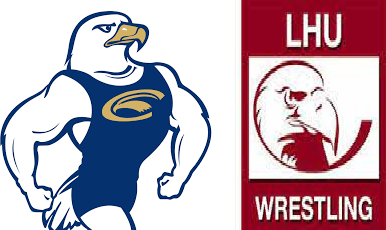 The last these two met, Fischer was able to take Noto into the tiebreakers as he darn near knocked off the Bald Eagle in a 4-3 tiebreaker loss. Now that Noto has found himself in the rankings, can Fisher keep it this close again?

I was very surprised the last time Moore and Eck met that Eck was able to keep it as close as he did. A 3-2 decision was not at all what I expected.  It's still not what I expect. I expect Moore to win this one by at least a comfortable decision. Very anxious to see if Eck can keep it close again.

It wouldn't exactly be the upset of the day, but it'd still be an upset if Ho were to upend Barton.  Ho's inconsistency and headscratcher losses keep him out of the rankings for now, but the guy has talent and he has ability.  It wouldn't surprise me at all to see him win this matchup today.

Similar records against opponents, I think this one will turn out to be a good one.  Fans, coaches and wrestlers often speak of what it's like to wrestle in Carver Hawkeye arena or the Bryce Jordan center, but if you ever experience West Gym at UNI, you know that it can be one heck of an environment too.  Northern Iowa might not get the publicity that Iowa and Penn State due, but when it comes to passionate fans, they may not match the #'s, but they sure as the sun shines match the enthusiasm.  In a match like this, it could make all the difference.

Haven't seen a match like what I think this will be in quite some time. I don't see a lot happening from the feet. I think both of these guys will pick up in an effort to show case their riding/turning skills.  Don't see matches often where both wrestlers choose up, and that might not happen today, but I can see it happening. Both are good in the top position and both might try and take advantage of it.

I think this will be a very close match.  A back and forth match.  Look forward to it.

Schoenfelder is another one of those wrestlers that I'm a bit surprised isn't currently in the rankings.  Victories this season include Brennan Swafford of Iowa, Julian Broderson of Iowa State & most impressive Peyton Mocco of Missouri.  A win over Brenner is quite a task, but it's not an impossible one. If anything, I think he'll show he belongs on the mat with him.

Great day of wrestling! Enjoy!
Posted by Stephen Stonebraker at 8:19 AM