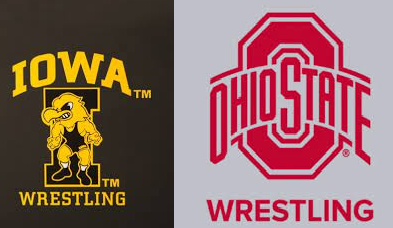 The #2 ranked Iowa Hawkeyes have been on a roll as of late with dominating performances in their last three duals. A 36-4 win over Purdue, a 33-6 victory over Northwestern and a 36-3 win over Illinois.  Friday night against #9 Ohio State, I think the domination will continue.

You never want to count a guy like Heinselman out of a match, but with the way Ayala has been wrestling as of late with victories of Devin Schroder of Purdue and Michael DeAugustino of Northwestern, I see him shutting down everything that Heinselman throws his way while at the same time working his own offense. Both of these guys have phenomenal gas tanks, so conditioning isn't going to be a factor but strength and counter offense will be.  A dec for the Hawks.

Going to treat this as if DeSanto will be the starter for the Hawkeyes and in that particular case the Norman Bates Energizer Bunny was dominating the last time he wrestled Koontz defeating him 19-4 technical fall. I think we'll see a similar result this time around.  If it is Schriever instead, I think this gives him a good opportunity, as well as a fair opportunity to show that he can be relied upon when needed.  Koontz may not be ranked at the moment, but he's a solid wrestler. Hasn't had a great season so far this year, but in 2020 put together a decent record with some notable wins.  Would be a good win for the young Schriever.

No doubt D'Emilio will give Eierman everything he has, but the unorthodox style & ability to counter absolutely everything thrown his way, will be too much for the Buckeye to overcome.  Eierman's dominance on top could and most likely will add into bonus points for the Hawkeyes. Look for a major in this one.

Here's one for the Buckeyes, but I do think that Murin will show how much he's improved & even in a likely loss, finally get the credit he deserves for those improvements. He's always been AA material, but there's a difference this season compared to those prior. It's gone from a, "hope to see him on the stand" to a "pretty sure he will make the stand" effort.  Sasso pinned him with a mere seven seconds left in the third period the last they met. I don't think the match will look anything like this, this go round. Matter of fact, I think Sasso will have to use his outstanding technique and second to no one mat strategy to come up with some clever scores.  Don't see Sasso in danger, but he'll have to work for his points in this one and I don't see many being scored.  Something like a 5-2, 6-3, 7-4 decision is what I predict.

All things considered, this is a match that Young is going to need to go into with preparation and focus.  Rankings don't always mean everything and Hubbard is a young kid, anxious to make a name for himself. He's already done some things this season of note, including knocking off #21 Elijah Cleary of Pittsburgh.  By all means this should be a win for the Hawkeye but it's not a throw away match. Don't let the U.R. fool you.

Smith is a top eight wrestler, for sure. No doubt about it. When we look at Ethan Smith, we're looking at a guy who's likely taking home a medal from this year's NCAA tournament.  When we look at Michael Kemerer, we're looking at a guy who's all pick and shovel, who will be going for the gold.  Kemerer going to major Smith? No.  I don't see that happening. The Buckeye is too strong, too technical and too prideful to get beaten like that. Yet there is no denying that Kemerer is on another level.  A 5-6 point win? Yes, I do see that.

Romero came within mere seconds of knocking off an Olympic Bronze medalist in a recent match with Michigan's Myles Amine.  #7 at the moment, I think he'll show he's a title contender within a short amount of time. While I think that Assad is a much better wrestler than his #18 ranking, the gap between he and Romero will show in this match.  I think he's good enough to go out and have a respectable showing, but this one goes to the Buckeyes.

If you truly like to hear it like it is, then as an Iowa fan you shouldn't have a problem with me saying that Hawkeyes can sometimes suffer from a disorder known as, "looking ahead."  I know that the Hawks have Penn State on their mind & I know that beating the Nittany Lions at home in front of 15,000 screaming black and gold faithful is their number #1 goal for the month of January.  That's all fine and dandy.  I will say though that Warner needs to worry about Hoffman before he worries about Dean.  On paper this one should be a cut and dry, go out, go to work, business as usual victory for the Hawkeye, but Hoffman is NOT...may I repeat, NOT someone you want to overlook.

Like Smith at 174, Orndorff is another very good wrestler, candidate for All American honors this season, but like Kemerer,  Cassioppi is on a whole different level.  Cassioppi has stuck the Buckeye on two occasions and he owns a shutout 11-0 victory as well.  In Columbus, I'd like to think that Orndorff will keep from getting pinned.

Posted by Stephen Stonebraker at 8:14 PM