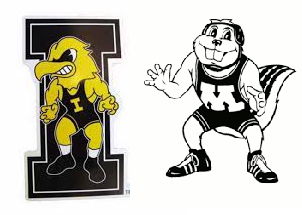 What an opportunity presented for true freshman Drake Ayala to prove himself in front of what is likely to be a sold out crowd at Carver Hawkeye Arena.  After dropping an 8-4 decision to McKee earlier this season, he closed the gap in a 6-5 loss to McKee at the Southern Scuffle. It's hard to beat someone three times in a row & even harder to beat them when they're in their house & their house has 15,000 people screaming against you.  What a CHA debut it would make for the young Hawkeye to pull off a win over last year's 3rd place NCAA All American.  Talk about potential.

Nagao impressed at the Southern Scuffle taking a runner-up finish & only losing to Michigan State All American Rayvon Foley by a score of 2-0. Can he keep it close with the relentless scoring machine DeSanto?  As mentioned this match is taking place in Iowa City, but let's study our history for a moment & remember that Minnesota has done a pretty decent job of not allowing the atmosphere of Carver get to them.  You have examples in the past where they did. Freshman Joe Johnston pinning NCAA champion Luke Becker. Ryan Fulsass who had yet to make an NCAA tournament, upsetting NCAA champion Damion Hahn.  Minnesota's track record isn't perfect, but they've also completely ignored the atmosphere too.  Example; Sam Brancale sticking Thomas Gilman.  Point is, you can find evidence to back up your claim either way.  So it's a real possibility that DeSanto hits fireman's after fireman's after kelly after kelly.  Yet's it's also a possibility that Nagao keeps it close.

This ought to be big points for the Hawkeyes I would think.  Bergeland might be able to go with Eierman on his feet, but once the Hawkeye gets on top I think we're gonna see the points go up on the board.

Murin thus far is 2-0 against the Golden Gopher scoring an 8-0 major decision and a 5-1 decision. He poses a style that has thus far kept Blockhus unable to generate any offense. I don't see Friday night's match up going any different than the last two have.  Murin ought to score another shutout or something close to it.

This is the most important match of the night for the Hawkeyes.  This is where the precedent is set.  With the departure of Spencer Lee from the lineup & the uncertainty of Michael Kemerer, the black & gold will now rely on the redemption of Young who has struggled so far this season.  Each match he has had with Lee has came down the wire.  Lee owns a 3-2 victory, where Young owns two victories via tiebreaker 3-2 & 4-3. While a win over the other would do both of these guys good, the sense of urgency is now for Young.  He needs this victory.

Not sure if the Gophers are going to start Sparks or Carlson and I'm not sure if against Marinelli it makes much difference. Marinelli already owns an 8-4 decision over Sparks & I think he wins by a similar margin regardless of who he's out there against.

The first time he suited up in a black & gold singlet, Brennan Swafford took a 6th place finish at the Southern Scuffle. One heck of an accomplishment in your first attached assignment. On the same hand, Bailee O'Reilly took 3rd at the Scuffle himself & he defeated Swafford 5-2 in the process. This is another example of where environment could make all of the difference in the world.  Both of these guys have something to prove.  Then again, the Gophers could start Krattiger instead.

Another match that favors the Hawkeyes. Don't think Assad can get a major though. I think Salazar keeps this to a decision.

A #5 Vs a #30, rankings heavily suggest a Warner victory but results tell a different story.  Foy is 0-1 Vs Pat Brucki of Michigan, whereas Warner is 1-2.  What really sticks out is that Foy owns a 9-3 decision over South Dakota State's Tanner Sloan, who tech'd Warner 19-3.  With the high rate of parity within collegiate wrestling, results Vs common opponents don't always mean anything.  With that noted, this does create great potential for Foy to pull off a huge upset in front of a hostile crowd.

16-6, 15-6, 9-4 & 7-5, Steveson is 4-0 against the Hawkeye.  All the time in the weight room, getting stronger, slicker and quicker, it is time to see how effective the extra training is going to be against the 2020 Olympic Gold Medalist/future WWE heavyweight champion. I just cannot see Steveson being defeated at this point, but there is still potential here for Cassioppi.  Few have ever scored an offensive point against the living legend, but imagine the deafening sound you'll hear if Cass is able to score a takedown against Steveson.

It's gonna be COLD in Iowa City Friday night, or if you're coming from Minneapolis....warm.
Posted by Stephen Stonebraker at 5:43 PM