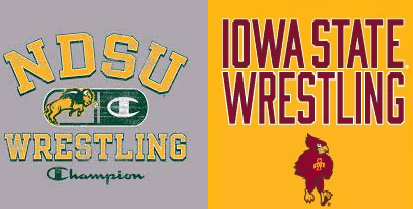 It's going to be cold in Ames, Iowa today.  Barring nasty little tornadoes in good weather is tiresome enough, but when it's predicted to only be between 11 & 16 degrees outside, it makes it all the tougher. On the same hand though, Bison are belt for the cold. They know how to endure the bitter cold winds.  While Iowa State is highly favored as the #14 ranked team & by all means they should walk away with the victory today, I think North Dakota State will fair pretty good against them.

The only reason Attasauov isn't currently ranked is because Iowa State has an uncanny habit of wrestling a multitude of wrestlers at the same weight class in various competitions. The advantage of this can be to illustrate that the depth of talent in the room but there are disadvantages too. If you don't have enough matches come post-season, and you need to rely on an at large bid to get into the NCAA's, you didn't do yourself any favors.  Attasauov is 9-3 on the season, his most impressive win ironically his most recent, a 12-3 major decision over Wyoming's Job Greenwood.  Yet what sticks out most about him is how well he competed against Iowa's Austin DeSanto in a 6-4 loss.  March has the ranking, and he's had some good victories this season too, including one over Greenwood himself as well as a 6-0 shutout over Buffalo's Derek Spann.  Gotta go with Attasauov on this one though.  I think we'll see an "upset."

This is one I'm really looking forward to.  Thus far, the speed and quickness of Carr has been too much for Franek to handle. Decisions of 8-2 & 11-4 as well as a 16-5 major for the Cyclone over the Bison.  Yet this has also been Franek's best season to date. 17-1, a Southern Scuffle champ, Franek's confidence is at an all time high & anyone in wrestling knows how much your mindset can make a difference.  Maybe Carr goes out and destroys him like he did the last three times they met.  That isn't a far fetched prediction. Yet neither is believing that Franek might give him a better match today.

This is another match where Iowa State has a wrestler much better than the U.R. next to his name would lead you to believe. Split time with Isaac Judge, Kraisser is 15-5 on the season. Tanner Cook of South Dakota State & Bubba Wilson of Nebraska among his notable victories.  Can he pull off an upset over Weber?  A much tougher task than Attasauov over March.  Weber is 13-4 on the season.  He's managed a fall over Minnesota's Andrew Sparks, along with victories over Gardner Webb's R.J. Mosley & Little Rock's Tyler Brennan. This will be a good match.

Both of these guys have made tremendous improvements since last season.  Brenner has victories over Minnesota's Bailee O'Reilly and Duke's Matt Finesilver.  Devine has a victory over Purdue's Gerrit Nijenhuis who recently knocked off Nebraska's Mikey Labriola & Devine also defeated Brenner earlier this season. It was a tight 3-0 decision.  Today's match I would wager will be another tight one, although I see a bit more offense out of each today than we did at the Daktronics Open two months ago.

This is where I think the Bison can show off their abilities to upset.  12 victories thus far for Pentz this season and 9 of them have been via fall. This guy takes putting shoulders to the mat as a business, and business is good.  He stuck Minnesota's Michial Foy & most recently he stuck Wyoming's Stephen Buchanan.  If he can do that, it's not too difficult to imagine him sticking Bastida.   That's ONE perspective.  Another is that if a match goes a full 7 minutes, it doesn't favor Pentz.  His conditioning is not his strong point and that has shown in matches against Rocky Elam of Missouri and Jaron Smith of Maryland. Bastida at 11-2, has a much larger gas tank.  A gas tank that helped him pull off two very nice wins against Iowa's Jacob Warner & Purdue's Thomas Penola.  He recently lost in overtime to Buchanan.  If this match last the full seven minutes, Bastida's gas tank will prevail.  That's IF it last the full seven minutse.  Pentz has a quota to keep & he's one Hell of a businessman.

At 15-3, Metz is a fun wrestler to watch.  One of the few big ole boys we have left at HWT, you'd look at him and think slow, shove and lean but despite his size, the guy gets after it.  Schuyler at 9-2, has looked pretty good this season too.  Should be a good match.


Posted by Stephen Stonebraker at 6:57 AM