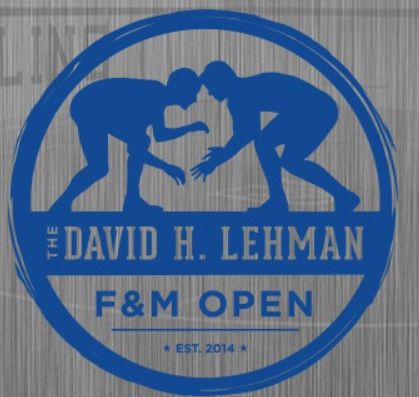 Named after generous donor & former Diplomat wrestler David Lehman, who set up a permanent endowment to insure the future of Franklin & Marshall wrestling, the Lehman Open is going to quite competitive this season.  One of the last in-season tournaments of the year before the conference tournaments, it gives participating wrestlers another opportunity at winning a title or placing high.

If everyone shows up, this is going to be a rather competitive bracket. Luke Werner of Lock Haven with a 4-1 win over Benny Gomez of Presbyterian and a 10-9 victory over Jacob Allen of Navy, looks to be the favorite coming in, but he'll have his hands full with competition.  Allen I would think would be the #2 seed with Gomez plausibly being the #3.  Noto in his own right has actually had more varsity starts than Werner this season & he's put together an impressive 17-1 record in the process.  Both Harvard's Beau Bayless and Virginia's Patrick McCormick have had some struggles thus far this season, but both have proven themselves in the past. McCormick has some notable wins on his resume & Bayless despite wrestling poorly at the Matmen Invitational did take Allen into sudden victory earlier this season.  Look for Max Leete of American and Hunter Adrian of Brown to perhaps pull of an upset themselves.


Virginia's Brian Courtney is the clear favorite to win a Lehman title here, giving both Andrew Fallon of American and Josh Koderhandt of Navy an opportunity to knock off a higher ranked opponent.  Fallon put together a 10-7 record at 125 lbs, which included a win over Pat McCormick, Courtney's teammate. This will be his first competition at 133.  Koderhandt thus far this season has garnered some notable victories including Jake Gliva of Minnesota, Kurt Phipps of Bucknell and Job Greenwood of Wyoming.


Franklin and Marshall's Wil Gil is going to have to figure out Army's Corey Shie if he wants to win a title in his final Lehman Open.  Thus far the Diplomat is 0-2 against the Black Knight, losing high scoring matches of 11-6 and 17-13.  On the same hand, Kaden Cassidy could also be a threat to Gil as well.  While Gil failed to place at the Matmen Open this past weekend, Cassidy owns an 8-7 victory over C.J. Composto of Pennsylvania who finished as the runner-up.  Look for Justin Bierdumpful of Brown to wrestle well & for a possible upset somewhere in the tournament out of Harvard's Michael Jaffe. On paper it doesn't look promising but like his brother A.J. the Jaffe brothers really ought to think of a life in magic post their collegiate careers.  They pull wins outta nowhere.


I know for a fact that if Alex Madrigal of George Mason were 100% that he would give Army's P.J. Ogunsanya a run for his $$ in the finals. Yet I don't know that Madrigal is 100%.  He had to medical forfeit his way to a 6th place finish at the Southern Scuffle after getting hurt in his match against Josh Edmond of Missouri.  If Madrigal isn't 100%, Virginia's Jarod Verkleeren is someone to worry about. Matter of fact, even at 100%, Verkleeren is someone to worry about.  Look for Lukus Stricker of Harvard, who recently finished 6th at the Matmen Open to possibly pull off an upset himself.

Like 125 lbs, if everyone shows up 157 lbs is going to be one Hell of an interesting bracket in the Lehman Open.  Rankings highly suggest a war of the military between Navy's Andrew Cerniglia and Army's Markus Hartman, but I think the guy to watch here is going to be Virginia's Jake Keating.  He recently returned after missing the opening part of the season to knock off some rust and finish 3rd at the Matmen Open. Wouldn't be surprised at all to see him take a title here.  Lock Haven's Ben Barton looks to be the next in line, but guarantees are scarce in this bracket.  I would say Harvard's Trevor Tarsi has a better shot at placing than teammate A.J. Jaffe, but again, remember what I said about brother Michael. I'll also add that A.J. seems to carry more rabbits in his hat than Michael does too. To be honest I was actually surprised when Jaffe finished one match shy of a medal at the Matmen Open. An uncanny habit of winning when I don't think he will and losing when I think he'll win.  Nick Palumbo of Sacred Heart has close losses to both Avery Bassett of George Mason and Tarsi, but he's shown he can wrestle well in high pressure situations, so that is well kept in the back of my mind.  Lastly we have Peter Pappas, who after transferring from Edinboro still has yet to wrestle for George Mason.  His record is not an indication of his capability.  If mentally cleared and ready to go, I don't feel the least bit nervous about saying he's capable of upsetting anyone in this bracket.

Looks to be a very exciting final between Harvard's Philip Conigliaro and Virginia's Justin McCoy, with Timothy Fitzpatrick of American and Val Park of Navy battling it out for 3rd.

On paper we have a final between Army's Ben Pasiuk and Harvard's Joshua Kim, but what I'm really anxious for is to see whether Victor Marcelli or Robert Patrick finally make a return to the mat for Virginia.  I've been very surprised that neither has wrestled yet this season and can't help but assume that there's an issue, such as an injury that I am unaware of. No offense to Justin Phillips but I find it hard to believe that he is beating both Marcelli and Patrick out for the starting spot.  He recently dropped a 16-0 technical fall to Logan Messer of George Mason & I cannot see Marcelli or Patrick losing by that kind of a margin to Messer.   Along with those mentioned, look for Shane Finney of Navy to take a placing in this tournament as well.


Rankings again suggest a battle of our military branches between Army's Brad Laughlin & Navy's David Key. I would say that final is likely, but I wouldn't give it 100%.  George Mason's Kyle Davis is extremely inconsistent, but he has some nice wins in his repertoire, including a 10-6 victory over Michael Battista of Virginia, another candidate with a similar background.


Virginia's Jay Aiello is the heavy favorite here, who will have a challenge in the finals against either J.T. Brown of Army or Jake Koser of Navy, but who should win the title regardless. Look forward to an exciting semi-final between Brown and Koser.  Koser is 2-1 Vs Brown thus far with a 9-4 & 3-2 t.b. win Vs a 6-1 loss.


Parity, rankings that don't necessarily match results and a pool full of talent, HWT at the Lehman Open is going to be interesting.  With a fall over Ben Sullivan of Army and a 3-2 decision over Yaraslau Slavilouski of Harvard I was going to mark Quinn Miller of Virginia as the favorite to win a title.  Yet Miller dropped a 6-4 decision to Isaac Reid of Lock Haven.  Then to make things even more fun, Riley Smith  of Navy owns a 9-7 victory over Reid, yet Ben Sullivan owns two victories over Smith, via 1-0 decision and 10-2 major decision. For what it's worth Slavilouski owns a 3-2 victory over Sullivan.  It'll be hard to work the seeding out perfectly, but it'll all work itself out in the bracket.  The odd man out here is George Mason's Austin Stith.  I'm still not sold he's big enough for the HWT weight class. Yet he recently pulled off a win over Jordan Earnest of Ohio, which I would call a respectable victory.  Anxious to see if he can hang with any of these big boys.


Posted by Stephen Stonebraker at 7:41 PM