Justin Portillo In His Own Words 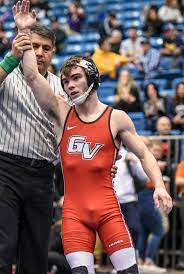 Grand View’s Justin Portillo, a senior at 125 lbs for the Vikings has an opportunity this season to become the Viking’s first five time All American. Thus far in his career he has finished 3rd-5th-2nd-4th at the NAIA national championships between 2018 & 2021.  Currently ranked #2 in the nation, his goal this March is to not only add a fifth medal to his collection, but for that medal to be gold.

Justin’s twin brother Josh has had a similar career, competing in NCAA Division II for the Lopers of Nebraska-Kearney.  Thus far he’s had finishes of 5th & 2nd at the National tournament, as he looks to end his career as champion as well.  While the siblings compete through performance and the two have duked it out unofficially throughout the years, this Saturday in a dual between Grand View & Nebraska-Kearney will be the first time the two have met collegiately.

JT#1 sat down with Justin to ask him about the upcoming match as well as some other questions about their careers and the rest of the season.

1 – How competitive were you and Josh growing up?

My brother and I have always been competitive, in good and bad ways. The story goes that I was born first because I got the escape in ultimate tiebreakers to win our first match. But he’d say I was born first because he got the pushout point! Many times, we were competitive with each other but not at each other. If he won a tournament I was that much more motivated to win it.

2 – In high school Josh was a three time state champion, while after finishing 2nd as a sophomore, you won two state titles. What was it like for you winning back to back state titles with your brother & what was your response the year you finished runner-up while Josh won his first title?

Winning state titles with my brother remains one of the best feelings I have experienced. When we were younger, me and him would just dream about winning state, national, and Olympic titles. And we both made each other believe we could achieve those goals. Winning those titles showed that through all of the work me and him have put in beside each other, we could accomplish anything. The car ride home when I took second and he won it was pretty awkward. Honestly, one of the first thoughts I had after he won it was: “Oh, great… He’s definitely using this next time we fight!” But yeah, that sparked an even larger fire underneath me to get the title the next year and share the glory.

I do miss having my brother in the practice room. He knows how the drill the perfect pace/intensity, gives me a great spar feel, and I know can hang with me in every position. However, not having him in the room allows me to get away from comparing myself to him and really grow my own identity as a person and wrestler. And we have gotten into some really bad fights during live, so it is probably best we don’t practice as much, anyways!

4 – What does this match between you and Josh mean to you? Is it something that will get brought up at Thanksgiving & Christmas in the years to come?

For this match, I’m not focused on outcome at all. There’s no ego there, because my opponent is basically me. This match up is perfect to compare evolutions of each of our wrestling styles. Wrestling is an art, a craft, and me and my brother have been artists in this game for a really long time. It’s our Super Senior year, and we have an opportunity to put on a wild show. But one thing that I do take seriously is that I am going to out fight him. My coaches and my team pride ourselves on out fighting everyone. When I don’t out fight somebody, regardless of outcome, I feel crappy about the match. Theoretically, my twin and I have similar physical limits on our bodies. Therefore, I think this chess match is going to come down to who is mentally tougher. Who can keep composure, who is going to get tired first? I think those attributes are going to come on display, and I’m excited to see what happens then.

5 – Your redshirt freshman year, you had an opportunity to wrestle Josh at the Sioux City Dave Edmond Open. Are you glad that this upcoming match will be the only meeting between the two of you, or do you wish you had wrestled him there as well?

In hindsight, I am glad we didn’t wrestle. He had just beaten a really good foe from Nebraska, a Midlands placer, in the semis, and I had, ironically, beaten a Grand View wrestler in my semifinals. We were both just beat up for the day and were happy to be co-champs. There will be no sharing of the crown this weekend.

6 – In Wrestling we sometimes forget that a wrestler doesn’t always experience his triumphs and disappointments alone. Josh has suffered a few setbacks during his career. In 2020 because of COVID-19 he had to miss out on what would have been his third NCAA DII appearance. Then in 2021 he finished a heartbreaking one match shy of earning his third All American title. What were those experiences like for you, watching your brother in those disappointments?

Well 2020 was tough because I thought Josh was perfectly poised to win the title that year. He was the #2 seed, but had majored the #1 earlier that year. My head was already down because I had lost in the finals the previous week at NAIA Nationals, but this was a perspective shifter. At least I got a tournament, he didn’t even have the opportunity. That situation taught me a lot of gratitude. Last year was tough, as we both ended the year in similar notes. Both of our teams just barely missed out on national championships, and I don’t think either of us performed to our best abilities. We had each other to lean on, but we also had many talks about sacrifice, resilience, and reflecting on what needs change. We certainly helped each other out of a rough spot, just as we celebrate with each other on the good spots.

After he won in the semis in 2019, I recall yelling out to him, “No one’s stopping you, Josh, no one!” I truly believed that. For a moment, I really thought my brother was invincible He was wrestling his best ever and just avenged a prior loss from the season. And even though he lost in the finals, I still was so proud of him. He was mat-side for my crazy semis that I won in 2020. It was a back-and-forth battle that ended with a scramble decided my inches and seconds. He made me feel so cool when I heard him cheering me on, haha. We are each other’s biggest fans, and biggest rivals, all wrapped into one!

8 – In the sport of wrestling there have been some outstanding sets of identical twins who have succeeded at the collegiate level. The Scherr brothers of Nebraska, the Brands brothers of Iowa & The Banach brothers of Iowa just to name a few. If you were to win an NAIA title & Josh were to win a NCAA Division II title, you’d be the first to win collegiate national titles in two different divisions. What would that mean to you?

That would be so cool. From day one when we transferred to our respective colleges, that was the plan. We went different divisions so we could both do it. We have both been so close and it is just a matter of putting the pieces together. It would be a wonderful way to cap off our careers.

9 – Last season you were upset in the semi-finals by Brandon Orum of Life. Then Orum barely edged you by a nosehair in the finals of the Life Open 2-1. What do you feel needs to happen & how are you preparing to avenge those two losses?

I know what needs to happen, but I’m not really focusing on any particular athlete right now. The truth is, there are multiple guys at my weight this year capable of winning it, and I can’t give more respect to one of them over the other. Bottom line, I need to focus on myself, getting my mind and body right, and I can beat anyone. I’m going into every match with deliberate intention and urgency, and I will out fight everyone I face. The rest will fall into place.

10 – Grand View has been one of the nation’s top wrestling schools not only in the NAIA but in all of collegiate wrestling for well over a decade now. What makes the program so special? Why do so many top wrestlers want to compete for the Vikings & get their education there?

The thing that makes our program special is the culture. We call it Championship Lifestyle. Winning is a way of life, not just something to do. There have been so many life lessons I have learned through this sport and program, the list will never end. One thing I will say is that my team is full of dogs. Everyone on this team is hungry and striving for serious goals. That is such a contagious attitude, and I think our culture showed up on the mats at national duals. That is what separates us and will continue to be a priority to the program and its athletes.

11 – Post college what does the future have in store for Justin and Josh Portillo?

No clue! I’ve got to finish up student teaching for my degree in the Fall, then who knows? I plan to help coaching either the men’s team, women’s team, or both while I finalize my degree, but after that my options are open. My main options are either trying this college coaching thing out full time, or I would teach and coach at the club/high school.

Posted by Stephen Stonebraker at 9:36 PM