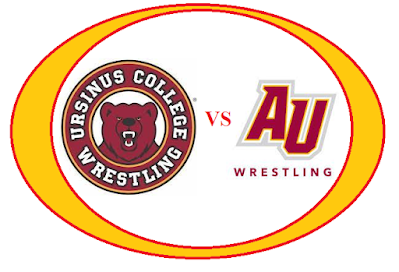 A great NCAA Division III dual later today as the Bears of Ursinus take on the Golden Wolves of Alvernia. Three matches in particular stick out today as we take a look at this matchup.


This could easily end up being the best match of the dual. A native of Staten Island, New York, Terry Adams qualified for the NCAA Division III championships.  The last time he met up with Keito Shaw he won a very hard fought 5-4 decision. This once again should be a good match between our two lightweights.


Despite prior accomplishments & quite a bit of space within their rankings, this match could end up being much better than what it looks to be on paper. Matt Lackman was 5th in the NCAA Division III championships last season, but I'd say in the very least, Shawn Marchesano will prove himself to be a R12 wrestler.  The last time these two met it was a tight 3-0 victory for the Golden Wolf.  Marchesano gave him a good match & I'd say at this point, he can give him an even better one.


If 125 lbs isn't the best match of the evening, then 184 lbs may very well be.  These two are pretty familiar with one another as Nagle owns a 6:13 fall over Kassis & Kassis owns a 4-3 tiebreaker over Nagle. Who will win this rubber match?


Posted by Stephen Stonebraker at 8:10 AM