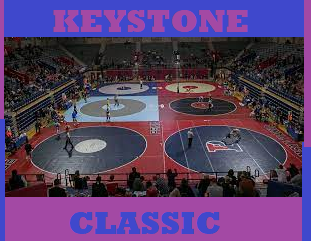 The 26th Keystone Classic is going to be exceptionally good this season. Ranked wrestlers at every weight class, there will be an assortment of highly competitive matches.


You're gonna have to earn your spot on the award stand in this one. Will this be where we see two time NCAA DI All American Brandon Courtney of Arizona State make his 22'-23' debut? If so based on ranking & result he would be our #1 seed. He has a victory over last year's champion Caleb Smith of Applachian State 6-5.  Smith defeated Ryan Miller of Pennsylvania 6-3 the title last season & in more recent times Courtney's backup Richard Figueroa defeated Miller 6-2.  Explaining seeds #2 through #4, I would give #5 to Virginia Tech's Eddie Ventresca who somehow or another has been able to say a single nose hair ahead of teammate Cooper Flynn in three 2-1 decisions.  Also in this mix who will contend for place-winner status is the usually tough Antonio Mininno of Drexel.

A little more parity in this one. Our obvious choice for the #1 seed here is two time NCAA All American Michael McGee of Arizona State. He owns a 7-5 victory over last year's champion Michael Colaiocco of Pennsylvania who I give the #2 seed.  #3 going with Sam Latona of Virginia Tech as he owns a 10-1 victory over Sean Carter of Appalachian State who I give the #4 seed.  As to the parity I speak of, Pat Phillips of Franklin & Marshall recently upset Latona 5-3, but he has a 4-2 loss to Carter. The guy that could come in here and spoil all of this is Harvard's Beau Bayless. Currently unranked, he was 3rd here a year ago at 125 lbs. Another place-winner candidate, Josh Jones of George Mason.

Considering that this tournament is taking place at the PRTC, I wouldn't be the least bit surprised if C.J. Composto doesn't show up. And if he shows up, I think he is the forerunner, being a returning All American for the #1 seed. #2 here I feel has been earned by Virginia Tech rookie Tom Crook who has looked exceptional thus far this season. Giving the #3 to Jesse Vasquez of Arizona State who owns a solid 6-1 decision over last year's champ, Carmen Ferrante of Pennsylvania. #5 going with Heath Gonyer, who placed 3rd here last season. A 4:48 loss by fall to Vasquez he took Ferrante to a 4-3 decision. Colin Gerardi of Virginia Tech I give the #6 seed & it is the guy I'd give the #7 seed to who we really need to keep an eye on. Harvard's Michael Jaffe decides to wrestle really well about once  year & he could very well cash in this tournament. Not only did he take Composto to a very tight 6-5 decision, he actually owns an 8-6 victory over Ferrante. Another place-winner candidate would be Harvard's other 141 lbs'er, Joe Cangro.


Debated on who to give the #1 seed to between Jonathan Millner of Appalachian State & Kyle Parco of Arizona State. Parco does lead the series 2-1, with a 9-5 decision & a 5:16 fall Vs a 9-4 decision. Yet at the time Millner is ranked higher & he is the returning champion.  Nevertheless it is our likely final either way.  Now, if my calculations are correct we are likely to see a semi-final between Parco & Pennsylvania's Doug Zapf. Parco had to injury default in their last match at the Journeymen Classic. Zapf was 2nd here at 157 last season.  Going with Virginia Tech's Caleb Henson as #4 & Drexel's Luke Nichter as #5. Kaden Cassidy, currently redshirting, was 2nd here at 141 last season. Let's see how he does a weight class up.


No matter what tournament it is, there is always that one weight class that is absolute chaos. For the Keystone Classic, it is 157 lbs.  Now what I will say, is that our final here is fairly concrete. I'm pretty sure we're gonna see Bryce Andonian of Virginia Tech Vs Anthony Artalona of Pennsylvania. It's 3rd through 8th where just about anything can happen.

Loranzo Rajaonarivelo of George Mason came out of nowhere last season to win this tournament & then he seemed to disappear as soon as he appeared. With a recent 10-4 loss two weeks ago to Trevor Tarsi of Harvard, I feel no other choice but to give last year's champ the #4 seed.

I give the #5 seed here to Nick Palumbo of Sacred Heart because while he has a 3-2 loss to Tarsi, he also owns a 3-2 victory over him.  Vs Cody Bond, who Tarsi defeated 10-7.   Clayton Ulrey of Virginia Tech could very well be better than #7, but all things considered, I felt that was the most fair seed.

It is who I gave the #8 seed that I am most excited to see compete this tournament. I have been talking up Peter Papas all summer & fall and he's either gonna prove me right this weekend or I'm gonna have to admit I was wrong. This guy has a ton of potential as well as talent, but he's got a long way to go as he climbs his way up. A lot of good competition to go through here.

Last but not least is Duke's Wade Unger. Never one to count out who's pulled off more than one upset in his day.  Could very well be a place-winner.


Well, not quite as chaotic as 157, but still a bit of a mess. While 157 has been put into the padded room with a straight jacket, 165 is being closely monitored with a high dosage of meds. As I'm known to do on rare occasion, I am going against the rankings on this one.  I would personally go with Connor Brady of Virginia Tech as our #1 seed.  He has a 6-3 victory over Tony Negron of Arizona State who I give the #2 seed.  #3 going with Will Formato, a runner-up here last season. 1-1 with Evan Barczak of Drexel, he is 3-1 overall against Drew Nicholson of Virginia Tech.  Seeing that Lucas Revano of Pennsylvania is 3-0 overall against Barczak, I think that makes him the #4.  Lastly, if this weight class has a monkey wrench then it is Joshua Kim of Harvard. He was 3rd at 174 last year.  Just something about these Harvard guys in this early season tournaments. They're always ones to watch out for.


I would think that Virginia Tech's Mekhi Lewis should win this bracket fairly comfortably.  It is the probable semi-final between Drexel's Mickey O'Malley & Harvard's Philip Conigliaro that I look most forward to. I think that will be a really good match. I think depending on whoever wins that match, Pennsylvania's Nick Incontrera will give them a run for 3rd.  Thus far he's been pinned twice by O'Malley, but the last time the two met, he took O'Malley into the tiebreakers.  Logan Messer of George Mason who was 4th here last season will be in the hunt for another medal. Lastly, I will say that Cael Valencia of Arizona State has thus far had a rough go of it this season. He's not doing anywhere near as well as I thought he would. With that noted, he's also the kind of guy that you never count out. The second you write him off, is the exact second he'll come through.  A top eight finish here? It should happen, but it's far from a guarantee.

Our likely final here is Virginia Tech's Hunter Bolen Vs Arizona State's Anthony Montalvo.  With that said, if I were them, I wouldn't sleep on either Brian Bonino of Drexel or Kyle Davis of George Mason. Now, Bolen does own a 38 second fall over Bonino, but at this level those quick first period pins don't always mean what you think they do.  Secondly Montalvo has had a roller coaster start to his season. He did not look good at all at the Journeymen Classic. As suggested in an earlier post, very well could have been injury, illness or who knows what. Whatever it was, it was gone by the time the Sun Devils dualed Missouri because he looked great in a 4-2 victory over Sean Harman.  For record, Bonino owns a 7-4 decision over Davis.


I believe our likely #1 seed & champion here is Arizona State's Kordell Norfleet. I could see long & lanky Cole Urbas of Pennsylvania giving him a decent match in the finals, but still going with the Sun Devil over the Quaker.  I think Virginia Tech's Andy Smith is a good candidate for 3rd place & I think teammate Dakota Howard will prove himself a tough back up as he'll most likely face him in the consolation finals. Lastly, I think this tournament presents an opportunity for Sean O'Malley of Drexel to make some noise.  Often in the shadow of younger brother Mickey, he has an ability here to earn a top eight finish & get some recognition of his own.

Our #1 seed here is obviously the number one ranked wrestler in the nation/returning NCAA finalist Cohlton Schultz of Arizona State. I will say though, that I think Harvard's Yaraslau Slavikouski could very well give him a tough match. I don't see the native of Belarus allowing himself to get caught up in the funky Greco that Schultz loves to demonstrate.  I give the #3 & #4 seeds to Hunter Catka of Virginia Tech & Ben Golden of Pennslyvania, but I'm telling you the guy to keep an eye on here is Franklin & Marshall's Cenzo Pelusi who fairly I give the #5 seed.  He's wrestled two good matches with Slavikouski thus far, dropping 4-1 & 4-2 decisions.  Another place-winner candidate, Mason Fiscella of Appalachian State.

Posted by Stephen Stonebraker at 10:46 AM