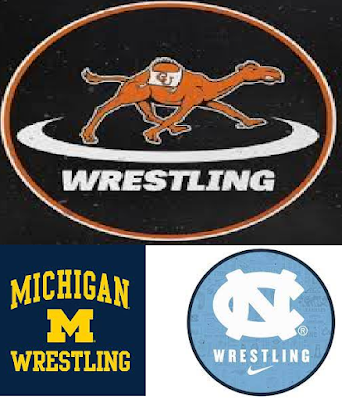 The Campbell Camels aren't sitting back. They are going toe to toe, back to back with two of the nations best teams. #6 Michigan followed up by #19 North Carolina. Let's take a look at the competition they will face.

Anthony Molton has himself one heck of a task tomorrow.  First he has #16 Jack Medley & then he turns around a faces a very tough unranked Jack Wagner of North Carolina. If nothing else, by the end of tomorrow night, he will know Jack.

Shannon Hanna has his hands full every bit as much as Molton. He looks to upset Michigan's Cole Mattin in order to move up the rankings, while at the same time looking to NOT get upset by North Carolina's Lachlan McNeil. Tremendous quickness & speed, he'll need both to go 2-0 tomorrow.


In my opinion Austin Murphy is so much better than the #20 ranking he is currently at. This guy is All American material. Yet thoughts don't mean much in the way of results. He needs a big win that'll get him to be taken seriously when it comes to both rankings & seedings. A win over Clay Lautt would do it. While the Tar Heel does own an 8-3 decision over the Camel, the other match was only decided by a point, 3-2. Both of these guys are top talents. This will be a good match.

Wrestling is all about opportunity. What an opportunity it'll be for Caleb Hopkins tomorrow.  He faces both #15 Matt Finesilver of Michigan & #10 Gavin Kane of North Carolina. Either one of these guys would be a huge win for the Camel. Again, much, much easier said than done.

Let's face it, I'm not saying anything anyone doesn't know when I say that Levi Hopkins hasn't had as fruitful of a collegiate career as brother Caleb. While Caleb has been to the NCAA championships twice, Levi hasn't earned his first trip yet. Nevertheless that is the beauty of dual meets. Levi will be tested against Michigan's Bobby Striggow, another brother in a similar situation to his. (Brother Jackson was an NCAA qualifier).  He will also have a golden opportunity against #29 Max Shawn of North Carolina. The last the two met, Shaw barely escaped with a 3-2 victory.  What a win it'd be for Hopkins & what a hometown hero he'd be if he were to achieve this upset.

#3 Mason Parris of Michigan is an awful tall order. At this point I don't think the Wolverine is beatable, but I do think Ghadiali can give him a better match than anticipated. At the same time, I wouldn't overlook North Carolina's Brandon Whitman. While unranked, he's a big strong guy that if for any reason he gets a lead, he'll hold onto like a leech.
Posted by Stephen Stonebraker at 12:54 PM