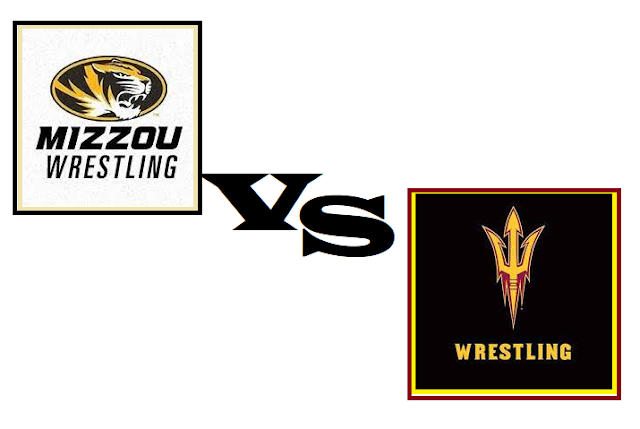 It'll be a great one this Thursday as the #4 Missouri Tigers take on the #5 Arizona State Sun Devils in a dual that could come right down to the wire. What really gives the Tigers the advantage here is that two time All American Jacori Teemer is out for the season due to injury & I'm not sure if Kyle Parco will be 100% or not. He had to injury default in a match at the Journeymen Classic this past weekend. Nevertheless, this is still a dual that the Sun Devils can win.


As to why we haven't seen two time All American/2021 NCAA finalist Brandon Courtney in action yet remains a mystery to me. I'm not sure if it matters much. Backup, Richard Figueroa has thus far done an excellent job filling in for the Sun Devils. Among his victories, #20 Dylan Shawver of Rutgers & #15 Ryan Miller of Pennsylvania. This will be a good match between a top 12 wrestler trying to work his way into being a top 8 & another wrestler proving how deep the Sun Devil lineup truly is.

From South Dakota State to Wisconsin to Missouri, then in add in all of the injuries that he has dealt with over the years, it's been a rough go of it thus far for Connor Brown. If he is to make something big happen in his collegiate career, now is the time to do it. He already owns a victory over McGee, a 14-8 one to be precise. On top of it, the last the two met, Brown gave McGee a hard fought 8-6 match.  So while this match does highly favor the Sun Devil, it is not out of the Tiger's grasp.


He's another match I think could turn out to be much closer on the mat than what it is on paper.  They have faced four of the same opponents and have had very similar results against them. While rankings my suggest otherwise, I say this match could go either way.


If Parco is healed up & 100% from the injury he suffered this past weekend, this will be a great match between two very talented individuals. The last these two met, Mauller came away with an 8-5 decision.


The graduation of Anthony Valencia, Tony Negron has stepped in and thus far done a standout job for the Sun Devils. He will continue to as the season progresses, but here I think he is way out matched. The 2022 NCAA champion will demonstrate why he's #1 & why in 49 matches he's only lost once. I will say though that as he's had two falls, a tech & a major thus far this season, Negron could hold him to his first decision.


Cael certainly is a Valencia isn't he? Speaking more so to Cael & Anthony than I am to Zahid, I sometimes wonder if the Valencias don't come in a box the same way chocolates do. I say that because you never know what you're gonna get. There's the Cael Valencia who has victories over PAC-12 champion Tyler Eischens of Stanford & four time NCAA qualifier Hayden Hastings of Wyoming. Then there is the Cael Valencia who lost twice this past weekend to unranked opponents. I would say in such a dual as this one, we'll get the prior, but let's not forget that we're dealing with Peyton Mocco here. Mocco himself can be a bit unpredictable and inconsistent at times. Other times, he can be as dependable as you need him to be.  This one could see Mocco have his way with Valencia or this one could turn out to be much better than anticipated. A lot depends on who all shows up, if you know what I mean.


It was NOT a good showing for Anthony Montalvo this past weekend at the Journeymen Classic & I really hope that something was wrong.  I hope something was wrong, it has been fixed & that we see the Montalvo from 2020 who had wins over the likes of Marcus Coleman of Iowa State, Nino Bonaccorsi of Pittsburgh & Tate Samuelson of Wyoming.  That's what I hope we see. If that's who steps on the mat this Thursday, we're gonna see a great match. If not, Harman could put the Sun Devils out of reach to win this dual.


The first time Elam & Norfleet met, the Tiger majored the Sun Devil 9-1. The second time they met, it was a much closer contest, this time won by the Tiger 4-2.  I think Norfleet is closing the gap on Elam and once again it'll be a close match. Defeating him though will be a very tall order as he has an incredible defense and an even better counter-offense. An upset here would be vital for a Sun Devil victory in this dual, but Elam realizes that every bit as much as Kordell.

I believe Zach Elam is due for an All American honor this season & I believe he will get one, but if I be a betting man, I'm still betting on Cohlton Schultz for this dual.  Schultz nearly majored Elam the last the two met 8-1. I don't think he'll dominate him in quite the same way, but it'll be clear the entire match who the better wrestler is.

Posted by Stephen Stonebraker at 8:22 PM