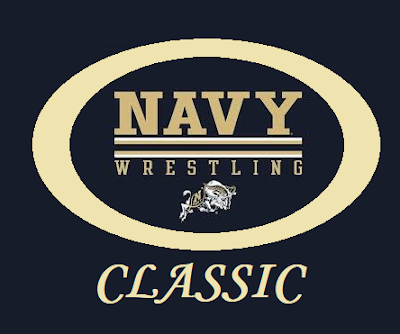 When it comes to these early season wrestling tournaments the Navy Classic has always been a favorite.  A tournament that has grown so much in terms of toughness throughout the years that it is one of the few that hands out eight places instead of six.  Ranked wrestlers at every weight class, indeed it will be a classic.

I see a lot of opportunity in this bracket.  I think the obviously #1 seed here is Lock Haven's sensational sophomore Anthony Noto.  He has the highest ranking & he has victories over both Liam Cronin of Nebraska & Jake Ferri of Kent State. He has an opportunity here to win this tournament and showcase himself against some good talent.  At the same time, this could present a grand opportunity for Ferri to make a name for himself. The last he met with Noto, it was a tight 7-6 decision.  Cronin too will want to step up his game & I will say the following concerning Tristan Lujan & Benny Gomez of Michigan State. We are often trying to compare wrestling to other sports like boxing & football. Perhaps sometimes we'd be better suited to compare it to Nas Car.  After all it is a race to see who can stay ahead of the other when it comes to earning the varsity position. Finishing high at this tournament, with quality wins over those listed would make for one heck of a lap. I will say that.

Any which way you spin this RayVon Foley of Michigan State is clearly the #1 seed.  Highest ranking, he won this tournament last season & he's the sole All American within the bunch.  With that said, if he's going to win another title, he's really going to have to earn it. I'm not 100% positive on the current status of Kyle Burwick. I know with the transfer from Wisconsin to Nebraska that there were some issues earlier this season & he was not yet an official member of the Cornhusker program. Nevertheless attached or unattached, I believe he's the likely candidate for the #2 seed. Two losses to Foley, he's 2-1 against Boo Dryden overall.  With the outstanding performance that Cody Phippen of Air Force gave this past weekend in Boone, North Carolina, it doesn't feel right putting him all the way down at #4, but one has to think objectively. He's still new to the 133 lbs weight class. It's only fair to put him there for now & see if he can't once again wow us like he did a week ago.  As to other top candidates for place-winner status, look to Kurt Phipps of Bucknell & Gable Strickland of Lock Haven.


I believe this weight class could be fairly wide open. Most of these guys have never met before. In fact the only two that have are Kyran Hagan of Ohio & Jordan Hamdan of Michigan State. That match ended 2-0 in favor of the Bobcat. While rankings & seedings will be one thing, it'll be fascinating to see how this one actually plays out. Josh Koderhandt of Navy, Darren Miller of Bucknell & Brock Hardy of Nebraska are all on even par as far as I'm concerned until they actually meet on the mat. I said it earlier this season & I'll say it again now, I think that Hagan is one of the most dangerous unranked wrestlers in the country. He could very well prove it here.


Ah, bloody Hell. This one is absolute chaos. You'd have better luck winning the lottery than you would tying to guess how this one would turn out.  If currently redshirting Ridge Lovett of Nebraska enters this tournament, I think it'd be safe to bet on him walking out the champion, but 2nd through 8th is anyone's guess. As to trying to seed this thing, what a mess. Rankings, head to head, last year's placings (at this tournament) & current status was all taken into account.  Yet take a look at each wrestler here one by one & you'll know why I say anything can happen.

Kody Komara of Kent State was the runner-up here last season.  Currently ranked #21, he recently defeated Alec Hagan of Ohio, 4-3. Yet in a total of six matches, it's his first time defeating the Bobcat. He has a 6-3 victory over DeShawn Farber of Lock Haven, with a 9-8 loss to Peyton Omania of Michigan State & a 9-3 loss to Dylan Martinez of Air Force.

Omania was the champion here last season.  For what it's worth, while Lovett has defeated him 13-3, the last time the two met Omania took him into sudden victory, losing 6-4.

Martinez as mentioned owns a 9-3 victory over Komara. He also looked outstanding this past weekend at the Mountaineer Invitational defeating both Jarod Verkleeren of Virginia & Jaden Abas of Stanford.

Farber owns a 3-2 victory over Hagan & an 8-3 decision over Conner Eck also of Lock Haven.

Lastly, Eck does own a 6-5 victory over Omania.

Another weight class where I believe we'll see a Cornhusker walk out the champion.  Peyton Robb is a clear favorite to win this title. As to the rest of the bracket, I think it's a little more up for grabs. I believe the plausible semi-final between Michigan State's Chase Saldate & Navy's Andrew Cerniglia will be really good. The guy who really has an opportunity to shine here is The Citadel's Selwyn Porter.  A runner-up here at 165 a year ago, he was an NCAA qualifier in 2020. Currently unranked, if he were to have a finish similar to the one he had last season, he would get himself into the rankings & help his case in trying to get back to the NCAA tournament.  Ashton Eyler of Lock Haven & Nick Delp of Bucknell, two others who should make the top eight.


Here's another weight class where some interesting things could certainly unfold. I think ranking helps to solidify Jagger Condomitti of Nebraska as the #1 seed, but it's not anywhere near clear, cut & dry as it is with Lovett at 149 or Robb at 157.  Here I think it's quite a bit more open.  Jordan Slivka was champion here a here ago at 157, as Caleb Fish of Michigan State was 3rd. Who to watch for here would be Nebraska's Bubba Wilson. Although the wrestle-offs strongly suggested that Condomitti will be the starter for the remainder of the season, I guess I need more convincing. Wilson is one of those wrestlers that can make adjustments & turn even the ugly losses into wins. Take into consideration that he also owns a 5-2 decision over Fish & may I present my case for why I still think he's in the game to win the varsity position, your honor.  The other guy to watch for here could very well be Navy's Val Park. He took Fish into sudden victory the last time they met, dropping a 5-3 decision.  Lastly, look for Avery Bassett of Lock Haven to be a place-winner.


By this point I'm probably being accused of Nebraska favoritism but I assure you it's simply a matter of rankings & head to head statistics. When you're ranked #3 in the nation & you own three All American medals to your resume, you're gonna be given the #1 seed. You're most likely going to win the tournament too.  As to who he'll face in the finals? At the time this is written Sal Perrine of Ohio has a #28 ranking against Sam Wolf of Air Force who does not. Yet, last weekend Perrine was upset early on at the Mountaineer Invitational, having to work his way back up to a 3rd place finish.  Wolf won the tournament. For what it's worth Jared McGill of Edinboro who upset Perrine 4-1, was then defeated 3-1 by Wolf. All things considered the likely semi-final between Perrine & Wolf will be a good one.  As to our other place-winners, going with Sammy Starr of Navy, D.J. Shannon of Michigan State & Ben Haubert of The Citadel.

Normally I put faith in and go along with the rankings, but in this particular case I'm not going to.  I personally give the #1 seed here to David Key of Navy, based on a couple of factors. First, his 10-4 decision over Layne Malczewski of Michigan State. Secondly, while inconsistent at times, thus far he's looked pretty solid this season. He finished runner-up to All American Jonathan Loew of Cornell at the Bearcat Open last weekend. I'm anxious to see if Nebraska's Lenny Pinto lives up to his hype. I've never been to keen on collegiate credits given for outside of collegiate results. I'm perfectly fine with him coming in here & winning this whole thing, but let's see him defeat Malczewski & Key, then we'll know rather than assume. As we do so, teammate Nathan Haas should be a place winner as should be Colin Fegley of Lock Haven & Zayne Lehman of Ohio. Tyler Bates of Kent State, also one I think should be a place-winner with unexpected, unpredictability.  I think winning this tournament is probably too tall an order at this point, but finishing much better than expected? Very doable.


Here's another weight where I am going against the rankings. I'm sorry but an 8-0 major decision is something I cannot ignore. Now don't get me wrong, it wouldn't surprise me at all if Cam Caffey of Michigan State turned that loss into a win. After all, he did hand NCAA champion Max Dean of Penn State a 3-2 loss two months post losing to Jake Koser of Navy.  At this point though, I give the nod at least in seeding to Koser.  I think a strong 3rd here will be Nebraska's Silas Allred & I think somewhere between 4th & 8th place we'll find VMI's Tyler Mousaw. An inconsistent wrestler, who could very well spend his entire collegiate career just outside of the top 33. One of the best unranked wrestlers at 197, at times maybe even the best unranked wrestler at 197. He seems to often be found among the place-winners.

Air Force's Wyatt Hendrickson is the obvious favorite for the #1 seed here. I don't see him having much if any problem coming in here and winning this tournament.  As to who will face him in the finals? I think we'll see a really good semi-final between Isaac Reid of Lock Haven & Grady Griess of Navy.  They've met twice thus far with Griess sticking Reid in 4:15 & Reid coming back later to take a 9-5 decision.  Could be wrong with the seeding though & the other guy to consider here is Nebraska's Cale Davidson.  I personally feel based on result at this point Griess WOULD be ranked higher, but new rankings simply haven't come out yet.  Other place winners I see here are Michigan State's Ryan Vasbinder, Navy's Ryan Catka & Ohio's Jordan Greer.


Posted by Stephen Stonebraker at 9:58 AM