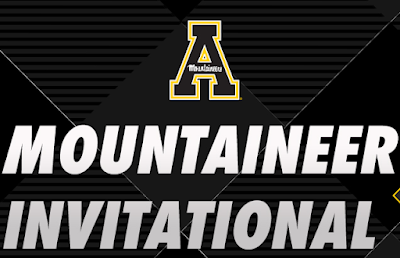 Another great early season tournament that will take place this weekend is the Mountaineer Invitational. Hosted by Appalachian State, there will be ranked wrestlers at nearly every weight class.

A runner-up here a year ago, Caleb Smith of Appalachian State looks to keep one of the titles won on Saturday at home.  He'll most likely be the #1 seed as he has the highest ranking & he owns a 4-1 victory over Patrick McCormick of Virginia & a 4:34 fall over Jake Ferri of Kent State. Yet speaking of McCormick, we could very well see a glimpse of the inconsistency that he is well known for.  He did NOT look good at the Southeast Open last weekend. Yet he could come in here and win this tournament. He does after all own a 3-2 win over Smith & for him to wrestle like poop one weekend & then turn around & wrestle great the next is nothing new for the Cavalier. Ferri as mentioned as well as Oscar Sanchez of Ohio will be others to look out for in this weight class.

I'm anxious to see how this one ends up getting seeded.  The obvious choice for the #1 seed is Appalachian State's Sean Carter, another Mountaineer looking to win a Mountaineer title. He has a win via fall over Marlon Yarbough who looked great at the Southeast Open this weekend. With victories over Logan Heil of Cleveland State & Joe Manchio of Columbia, I wouldn't be all that surprised if Yarbough got the #2 seed over Jackson DiSario of Stanford. Either way, it's a likely semi-final regardless of who is 2 & who is 3.  Who I really want to see in action here is Cody Phippen of Air Force. With 125 being too small & 141 being too big, I hope he makes like Goldilocks and finds 133 to be just right. He has the competition here to more than test himself.  Lastly, although he didn't look great the Michigan State Open, Gio DiSabato of Ohio could be one of our top 6 place-winners.


This weight class features some of the best unranked wrestlers in the nation. What I mean by that is that even though none of these guys are currently ranked in the top 33, all four of them are contenders for NCAA qualification. By season's end, all four of them could very well be NCAA qualifiers.  I believe that the #1 seed here will most likely go to Dylan Cedeno of Virginia. The one of the four who does have an NCAA qualification under his belt, plus a 21-13 victory over Appalachian State's Heath Gonyer.  Kyran Hagan of Ohio will be the one not to sleep on in this bracket & I'd look for a top six showing out of Stanford's Jason Miranda.


You're gonna have to earn your top 6 showing here buddy boy. This be one tough weight class. 5 ranked wrestlers, three returning place-winners, plus some other worthy challengers. As I look over the weight class, on more than one occasion I ask myself, rank or head to head? What holds more water? Appalachian State's Jonathan Millner is four spots ahead of Stanford's Jaden Abas in the rankings, yet it is Abas who owns a 5-3 victory over Millner. So who do you give the #1 & who do you give the #2. Jarod Verkleeren of Virginia  who I would give the #3 seed, for the record owns a 7-4 victory over Millner.  Based on ranking along, it seems next in line for the #4 seed would be Kody Komara of Kent State. Do you know Komara's over all record Vs Ohio's Alec Hagan? 0-5.  The Bobcat has defeated the Golden Flash 7-4, 5-4, 6-0, 4-3 & via fall in 2:44. Also keep in mind that Air Force's Dylan Martinez, 3rd here a year ago, has a 9-3 victory over Komara.  Then with all this in mind we still gotta add in Gardner Webb's Zach Price & Verkleeren's teammate Denton Spencer.  Price who had to injury default out of the Southeast Open this past weekend is a time bomb waiting to explode. Spencer is 1-1 with Komara having lost a 7-2 decision & having won a 7-4 decision. A 2-1 win over Martinez, he's lost twice to Hagan by scores of 4-3 & 1-0. When I say this will be a wild weight, I mean every word of it.

The forerunner here for a Mountaineer Invite title will be Virginia's Jake Keating. I would wager to say his finals opponent will be Appalachian State's Cody Bond who was also a runner-up here last year.  As to the battle for bronze? A battle for varsity.  Daniel Cardenas upended Charlie Darracott 7-4 for a Menlo Open title this past weekend. It'll be another great match between the two as they continue to start for the starting spot on the Cardinal team.


Five ranked wrestlers in this weight class. The obvious favorite here to win a title is Stanford's Shane Griffith. The 2021 NCAA champion shouldn't have too much trouble, although I can see Virginia's Justin McCoy, our likely opposing finalist giving him a decent match. I say likely as this is Will Formato's home stage. Although he's lost to McCoy 14-4, he's also had closer matches with him in 7-4 & 5-2 decisions. I would say thinking of this rationally we're most likely to see Formato doing battle with R.J. Mosley of Gardner Webb for 3rd.  The Mountaineer & Runnin' Bulldog are very familiar with one another. Formato has won 5-3, 3-2, 2-1 & 2-1 tiebreaker decisions. Yet it was Mosley who overcame Formato for a SOCON title last season 9-4.  With this information keep in mind that our monkey wrench here is Ohio's Jordan Slivka.


Stanford's Tyler Eischens is the favorite for a title here as he has the highest of the rankings & none of these guys have ever met before.  A favorite to meet him in the finals is Ohio's Sal Perrine. As to the rest of the place winners? My bets would be on Sam Wolf of the Air Force & both Justin Phillips & Victor Marcelli of Virginia.


Virginia has another hopeful for a title in Neil Antrassian but I do believe that he will be challenged here more than what the rankings would lead you to believe. All three of these guys, Gardner Webb's Jha'Quan Anderson, Kent State's Tyler Bates & Ohio's Zayne Lehman can be tough when they want to be. I really don't know how this one will be seeded beyond Antrassian, although I can tell you that Lehman owns a 3-1 victory over Bates.


Virginia's Michael Battista's confidence was rocked a bit last weekend as he was upset twice, finishing a disappointing 6th at the Southeast Open. Winning a title here, especially with a win over likely finalist Nick Stemmet of Stanford would help to build that confidence back up. On the flip side of the coin, a win over Battista would be great for Stemmet's confidence. Not sure if at this point it would propel him into the rankings or not. What I think it would do is help him to realize he's good enough to be in the rankings.

The blatantly obvious favorite for a title here is Air Force's Wyatt Hendrickson. I see the Falcon flying in & flying out without breaking much of a sweat in doing so. With that said, I think his finals oponnet will be Mason Fiscella, giving Appalachian State yet another finalist for their home invitational.


Posted by Stephen Stonebraker at 9:06 AM