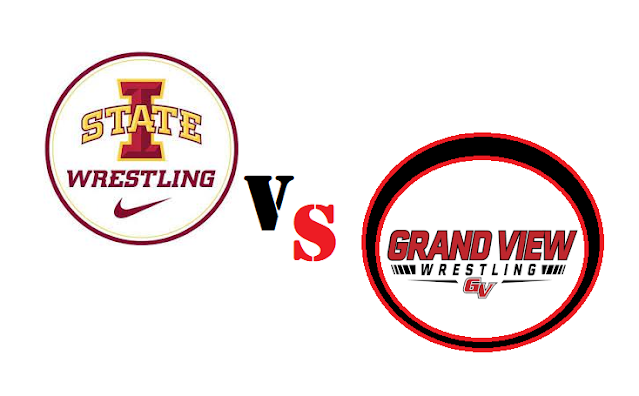 I have been an advocate and backer of NAIA wrestling for twenty years. Although it has been around for sixty-five years, it has only recently gotten the attention & affirmation that it deserves. Largely in part because of the massive growth of teams within the last 10-15 years and because of the dominance of the Grand View Vikings. The Vikings in many ways have helped to put NAIA wrestling on the map & garner it attention from not only fans but also the people in wrestling media.

It goes without saying that NCAA Division I wrestling is still NCAA Division I wrestling. It is the best of the best & it often proves itself to be in many situations. We're also talking about out of nearly 80 teams, Iowa State, a program currently ranked 11th in the nation. If we were talking a team outside of the top 25, I think Grand View could have an even better showing. Against a team like LIU or Davidson, maybe even a dual victory.

Nevertheless, the Vikings will be taking on the Cyclones this Sunday in NAIA Vs NCAA DI action.  Is this dual winnable for the #1 team in the NAIA? To be fair and objective, probably not. However, I do think the Vikings can win individual matches in this dual & I also think in some of their losses they can look competitive.  Let's take a look at the matches one by one....


I definitely feel that this is a match that Grand View can win. The NAIA national champion against one of the Cyclone's backups. I think experience plays a big factor & we're in neutral territory as this dual takes place in Humboldt, Iowa. I don't think it'll be anything more than a decision, but I do feel that GVU puts up 3 points for their team here.


Whether it be Zach Redding or Ramazan Attasauov, Carson Taylor has an extremely difficult challenge ahead of him. Although he was 3rd in the NAIA last season, both Redding & Attasauov are NCAA DI All American candidates. If it is any indication, Attasauov scored a 18-0 technical fall over Shea Ruffridge back in 2020. At this point, I think to keep either one of these guys at a decision in itself would be a victory. To keep it close, even better. To pull off a win, what a statement for Taylor, GVU & the NAIA.


True freshman Casey Swiderski has done fairly well thus far this season. Wins over Joseph Zargo of Wisconsin & SOCON champion Shannon Hanna of Campbell. Can Shea Ruffridge, the #2 wrestler in the NAIA who was 3rd last season hold his own against him? I think he can. He's improved immensely since his loss to Attasauov three seasons ago & I think he'll demonstrate that out on the mat. Defeat the Cyclone? That may be another story, but I do think he'll show that he does belong on the same mat with him.


A NJCAA champion for Northeastern Oklahoma A&M, Blake Gonzalez is planning on doing an assortment of great things for the Vikings this season.  His opponent here is yet another Cyclone phenomenal freshman, Paniro Johnson who shocked the wrestling world two weeks ago with a 9-4 victory over Austin Gomez of Wisconsin.  At the same time though, he then struggled to get past Little Rock's Joseph Bianchi. So what does that tell us about this match? Sometimes you don't know what to think. This could be closer than initially anticipated.


This is definitely a match that the Vikings are in. I don't know if they'll go with Casarez or Bonilla, but either way, both can give Isaac Judge a run for his money.  The last Judge & Bonilla met, Judge won a 4-1 decision. This one I'd call a toss-up.

I at times can be accused of being utopian & perhaps within this article you've already made that distinction. I don't have my head in the clouds here.  2nd last season & 3rd in 2021, I'm still standing under my claim that Marty Margolis is one of the best wrestlers in the NAIA yet to win a national title. That doesn't change that he'll most likely get lit up by 2021 NCAA DI champ David Carr though.  I can't see this being anything less than major decision, decided by mostly takedowns. This is where we will see the difference between NAIA & DI.

I'm not sure who Iowa State puts out here against Isaiah Luellen, but I don't know if it really matters. Gaitain, Broderson or Devine, I think the #1 NAIA wrestler who was 3rd in last year's national championships can give any of the three a good match. Real close, probably not, but I'm thinking a 5-1 decision, a 6-2 decision. He'll make whichever Cyclone it is work for every point he scores, and he'll score a few points himself.


Man, an exact replica of what I said at 165 lbs. Lee, 2nd last season & 3rd in 2021, like Margolis is one of the best wrestlers in the nation yet to win an NAIA national title. Yet against Marcus Coleman, 7th in NCAA DI last season? Well let me put it this way, he lost a 16-3 major  decision to Devine. Then he also lost both a match by fall in 5:33 & a 6-1 decision to Broderson.  I am not overlooking the fact that Lee has made vast improvements & that he is not the same wrestler he was 3-4 years ago when those matches took place. It's simply that we're talking the #5 wrestling in DI. I welcome him to prove me wrong. Matter of fact I more than welcome it. I'd love to see it.

Again a match where we're severely outmatched.  Take nothing away from Owen Braungardt, a two time NAIA All American, a national champion contender, who will earn his third NAIA All American honor in March. Yet we're talking Yonger Bastida, 5th in NCAA DI last season. This is a guy who will contend for the national title. Mark my word, Bastida will be representing Cuba in the years to come at the Worlds & The Olympics. Wouldn't be surprised if he doesn't earn medals. This one doesn't end in a major for the Cyclones, I'd be very surprised.


If I hadn't have seen how good Sam Schuyler looked against two time All American Trent Hillger of Wisconsin two weeks ago, I might have chalked this one up as a toss up. Yet he looked great securing a 3-2 decision over the Badger. Hagan was 2nd at last year's NAIA championships & he also has some DI experience himself, starting off for Indiana before he came to Grand View. I think he can keep this match to a decision & I also think that he can keep it to a close decision.  Upsetting the Cyclone? It has some probability, but not much.


Posted by Stephen Stonebraker at 11:27 AM