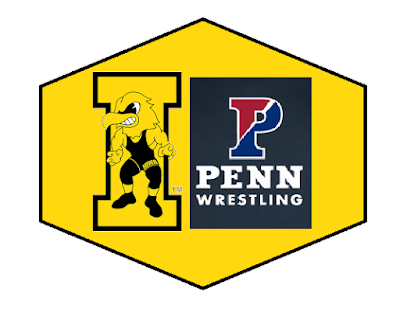 As the Hawkeyes near the end of month one of the collegiate wrestling season, as a team they will get past the Pennsylvania Quakers without much of a struggle. Yet on an individual level, there will be certain matchups that may be tougher than initially anticipated. As they look forward to the future, looking ahead at the bigger "more important" duals & tournaments, it'll be wise in many cases to keep attention on the here and now. As objects in the mirror are closer than they appear, the guy on the Oatmeal box is tougher than he appears.


Going to be optimistic and hopeful here that we see the 22'-23' debut of three time national champion Spencer Lee.  As he gets into the grove of things, Ryan Miller will be a decent first test for him. Late into the season, I'd call this one a big major, or even a tech or a pin for the Hawkeye. First match of the season? I'd say a smaller major.  So we're talking something like a 8-0 or a 9-1 Vs one of those 20-8 types. Miller might even be able to keep this to a decision.  Just depends on the rust level of Lee.  IF it's anyone other than Lee in the starting spot, this will be a win for the Quakers.

This will be Brody Teske's first real test as a Hawkeye. Colaiocco is a tough wrestler who has earned his #10 ranking. Either way, a win here is very good for either wrestler in terms of ranking, credential and result.


I wouldn't let the fact that Carmen Ferrante is unranked fool you. He was at 149 lbs last season, a weight he wasn't near big enough for and now he's at a comfortable 141 lbs. Thus far this season he's majored MAC runner-up Josh Mason & of his three losses, one sudden victory, a other a tiebreaker. If this is indeed Real Woods debut as a Hawkeye he'll want to be awake, alert and ready to go. He will NOT want to sleep on Ferrante.


Here's another match the Hawkeyes will want to be adequately prepared for. I've said many times & I'll keep saying that with three R12 finishes, Max Murin is one of the best wrestlers in the entire nation yet to be an All American. The thing about it is, Doug Zapf is another tough senior who is also looking to earn his first All American honor on his way out.  The last the two met, Murin controlled a very nice 7-1 victory.


As Patrick Kennedy settles into his role as Iowa's 165 lbs representative, Penn's Lucas Revano will be an excellent examination to see where he's at this point in the season. Should be a win for the Hawkeye but he'll have to earn the points he puts up on the board.

This should be a comfortable decision for the NCAA runner-up, maybe even a major decision. However, it is again a match not to overlook.  Urbas is tall & lanky, and knows how to use his massive reach to his advantage.


At this point in the season Tony Cassioppi truly is the fourth best HWT in the nation. Ben Goldin is a solid, tough HWT himself, but here the 18 spaces of separation will make themselves well known. See no less than a major for the Hawk, maybe even a fall.

157 is a for sure win for the Quakers.  Two time R12'er,  EIWA champ Anthony Artalona will put up nothing less than a solid decision for the blue and red. Maybe even a major.

174? Well, verifying or nullifying a rumor is collegiate wrestling is the toughest of tasks. From what I hear BOTH Nelson Brands & Brennan Swafford are out with injury. This is rather alarming and quite concerning, although we still have a long ways to go until March.  With both of them out of the lineup, this is another win for the Quakers. Nick Incontrera by no less than a comfortable decision.

184, here's another area where the Hawkeyes can well extend their lead. Abe Assad by no less than a major decision.