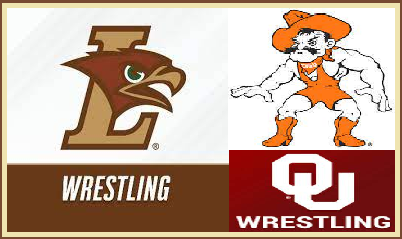 The #26 Mountain Hawks head into the second week of the NCAA DI season, chartering rough waters as they take on the #12 Oklahoma State Cowboys & the currently unranked, yet always game Oklahoma Sooners. From top to bottom, each of their wrestlers will have two extremely hard matches on Saturday.


Sometimes you gotta tell it like it is, and "like it is" says that Connor McGonagle doesn't stand much of a chance against three time NCAA runner-up Daton Fix.  While we never say never in this sport, I'm chalking this one up as a win for Fix.  As to McGonagle Vs Henson, this should be a win for the Mountain Hawk, but he'll have to earn it.

A golden opportunity here for Malyke Hines. While Young is quite a few spots ahead of him in the rankings, I'm not sure if he's as far ahead of him on the mat. Mosha Schwartz will also be a challenge. Hines could go 2-0, 1-1 or 0-2.


I believe Monzona Bryant will have just as much trouble, if not more with Mitch Moore than what he will with Victor Voinovich. Injured last season, if healthy, Moore is an All American candidate, as is Bryant himself. Both of Bryant's opponents are extremely tough competitors and both would be excellent victories to add to the win column.

Of all the Mountain Hawks discussed thus far, Josh Humphreys has the best bet of going 2-0 in tomorrow's duals. He's defeated Wyatt Sheets twice already by scores of 7-3 & 16-2.  While Sheets has proven an ability to come out of nowhere before, I think Humphreys knows him well enough to avoid any tricks or surprises. As to Butler,  I think Humphrey's A game from the top position will be too much to handle for the Sooner.


I'm not 100% sure who the Oklahoma State Cowboys are going to send out on the mat against Brian Meyer. My guess is Jalin Harper, but they could just as easily send out Travis Mastrogiovanni. Either way, I think this will be a win for the white and brown. It is Gerrit Nijenhuis that has me concerned for Meyer. These guys have a lot in common. They have both pulled off some tremendous upsets. Last season Meyer knocked off 2021 NCAA runner-up Jake Wentzel of Pittsburgh. Nijenhuis knocked off three time All American Mikey Labriola of Nebraska. At the same time, both have suffered some questionable losses. It's always interesting to see two wrestlers that contrast go head to head on the mat, but it's every bit as interesting when you see two wrestlers that compare. This will be a good one.

One of the aspects that sets wrestling apart from many other sports is how one mentally prepares. Often times in the same night you have to try and prepare yourself to pull off a major upset, while at the same time doing what you can to prevent yourself from being upset. That's the exact predicament that Jake Logan is in tomorrow. Trying to upend the Cowboy's Dustin Plott is a taxing endeavor, but it is not impossible. The last the two met, Plott won a close decision 5-3 decision. While planning his strategy against Plott, it best that he not forget about Darrien Roberts. While not currently ranked, he's not one to be taken lightly. He'll keep Logan on his toes.


The Tate Samuelson Vs Travis Wittlake match is the one I look the most forward to out of all of the great matches we will see this dual. Samuelson looked very good earning the starting spot over a tough A.J. Burkhart but he struggled this past weekend against Oregon State's Trey Munoz.  Wittlake on the other hand, I don't know what to make of him at this point. In 2021 as a freshman he had a sensational season, finishing 4th in the nation. I really thought he'd make a run at the NCAA title last season. Instead he didn't even qualify. Now he's at 184 lbs. Do we see 2021 Wittlake or do we see 2022 Wittlake?  Honestly, Wittlake will be a great test for Samuelson & Samuelson will be a great test for Wittlake. Grayden Penner will be a good victory for the Mountain Hawk as well, as he should be able to win by a comfortable decision over the  young Sooner.  Again though, not one to overlook as Penner has already shown promise this season with a nice victory over NCAA qualifier DeAndre Nassar of Cleveland State.


Another Mountain Hawk who should be able to go 2-0 tomorrow night is Michael Beard. Nevertheless, neither win will be easy. Both Luke Surber & Keegan Moore will be tough to deal with.

Both literally & figuratively, Nathan Taylor carries a tremendous amount of weight. He's a big strong, from the looks of it, all of 285 lbs HWT. He's also doing his best to fill the gap left behind by Jordan Wood. Wood is the EIWA's only five time champion & he was 3rd in the nation last season. Those are not easy shoes to fill. What a mark it would make on the young Mountain Hawk's career if he were able to garner an upset over Konner Doucet or Josh Heindselman. Think about what it'd do for him if he were able to upset them both. Much, much, much...for good measure one more much...easier said than done with guys as talented as those two.


Posted by Stephen Stonebraker at 4:39 PM