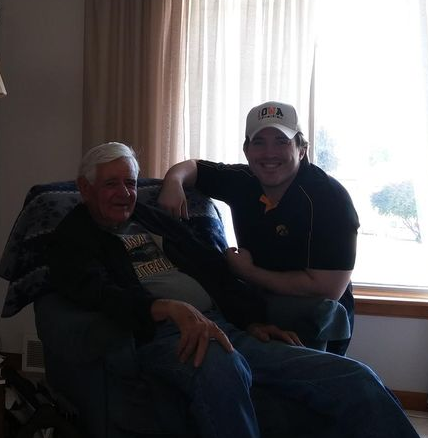 It's hard to believe that as much as I love wrestling & as strong of a passion as I have for the sport that I would have someone in my family that hated the sport, but I did. My Grandpa Richard Grimm, who passed away yesterday, hated wrestling with a passion. He thought it was a stupid sport & you know those people who try and degrade the sport by calling it gay or saying that it isn't anywhere near as tough as football? That was Grandpa Grimm.

Yet despite his hatred for the sport, he did come and support me quite a bit. If any of my matches were an hour's drive or closer, he was often there.  From pee wee all the way through High School, he showed up. I often got a card from him afterwards. "Congrats on the big win!" Or "Better luck next time."  He was never shy about telling me his feelings towards wrestling, but at the same time he was often in the stands cheering for me anyway.

He once got in a fight with Dan Gable. That moment made me glad Grandpa Grimm was my maternal grandpa & that I did not share a last name with him. This actually happened back in the late 70's before I was born & hopefully it's something that Gable doesn't even remember. Grandpa loved to tell the story though.  You see Grandpa Grimm worked as a custodian at the University of Iowa from the late 60's through the late 90's. He got to know all of the Iowa people & he didn't care for too many of them. Along with this fight that he got into with Dan Gable, he also once got into it with Hayden Fry. I'm not proud of the reason why & it's a story for another day, but when Iowa played Michigan State sometime in the early 1980's, he was ejected from the game by security.  He was a good man in a lot of ways, but he had a wild side to him. He would apologize for his actions, but he never apologized for who he was.

Then he told me about a time years later when he had just cleaned a huge area & some Iowa wrestlers came in & messed it all up again.  It made him so infuriated.  He'd talk about that incident that happened some 40 years ago like it happened earlier in the day.

So I always grew up thinking that his hatred for wrestling came from the altercation he had with Dan Gable & the time the Iowa wrestlers messed up an area that he had spent a long time cleaning up.

"Is that why you really hate wrestling?" I asked him one day about two years ago.

"Then why do you hate wrestling?"

This is when I found out something about my Uncle Tom that I had never known before.

I had never known that anyone on my mother's side, other than my cousin Cody for a couple of years had ever tried wrestling. I thought I was the sole wrestler on that side of the family.  Yet I guess my Uncle Tom, way too small for football & way too short for basketball, decided to go out for the newly formed wrestling team his freshman year of high school.

Now, I only have my Grandpa Grimm's account on this, so the story is only told from one man's perspective, but the way Grandpa Grimm talks, Tom took to wrestling pretty well. He wrestled at the second to lowest weight class & the other kid at his weight was a beginner just like him. At first the other kid was beating him, but not by much. It often came down to a couple of points. Then one night Tom came home all excited because he had beaten the other kid for a spot on the varsity.  Yet when the next dual came, the other kid still started while Tom remained on the reserves. This didn't set  well with Grandpa Grimm. He let it go the first time, but then they had another wrestle-off, and Tom came home from school saying he had won that wrestle-off too.  Yet when the next match came, the other kid was again starting & Tom was sitting on the bench.

At first Grandpa Grimm thought that maybe Tom was lying. He thought that maybe the other kid was beating Tom & Tom was lying about winning the matches. He confronted Tom about it and Tom stood by his word.  Grandpa Grimm asked some of Tom's friends who were on the wrestling team with him & they claimed the same thing, that Tom had won the last two wrestle-offs.  This is when Grandpa Grimm decided it was time to go to a wrestling  practice & ask the Coach what was going on.

He went to the wrestling practice, walked right up to the coach and asked him if Tom had won the last two wrestle-offs.  The Coach admitted that Tom had won.  Grandpa Grimm then asked him why the other kid was starting if Tom had beaten him in the wrestle-offs. The Coach said because the other kid seemed to have more promise on the mat than what Tom did. Grandpa Grimm wasn't too happy with this answer.

Grandpa Grimm was done talking.  He went up to the wrestling coach & assaulted him. Exactly what he did is up for debate. He's told the story a few different ways over the past couple of years. Whatever he did, it wasn't good. The assistants had to pull him off and by all means he's lucky that the law didn't end up getting involved.  The sad part is, Tom was thrown off the wrestling team and not welcomed back.  Wrestling may not have ended up being his thing anyway. Who knows? Maybe he would have quit on his own. Nonetheless, I wish that would have been his decision rather than someone else's.

So that was the real story as to why my Grandpa Grimm hated wrestling.


Posted by Stephen Stonebraker at 8:11 AM