WHAT A SEASON!! I've been watching wrestling since 1991 & I've been following it religiously since 2001.  This is without a doubt, the toughest season I have ever witnessed. I don't think I'll ever see a more competitive year of collegiate wrestling than what I did this year. I have a million thoughts & I considered writing them all down in one gigantic blog, but then I figured that it'd be too much for one sitting. I'm going to do this weight by weight.  Where to start? What all to say?  Here goes nothing. Bare with me. 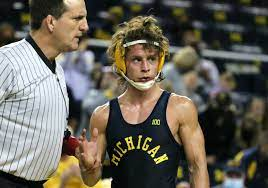 Very few people can say they competed for 1/4 of the BIG 10, but Nick Suriano can. It was exciting when the Nittany Lion turned Scarlet Knight decided to transform into a Wolverine for his final season. I statistically proved that in terms of stats, accomplishments, credentials & overall performances, Michigan is the best team in NCAA wrestling yet to win an NCAA team title. I'd be more than happy to provide you that article with all of the data I worked hard to collect but take it from me; never trust another publication when they tell you that you'll always have the rights to your own work. I learned the hard way that no you won't. People lie. I digress.

The fact is when Suriano joined the maize and blue, it gave forth a hope that maybe just maybe Michigan could finally bring home the team title. That didn't happen, but I'll argue they were in the hunt. Furthermore they brought home a nice shiny silver plaque for second place. A great year for Michigan wrestling & Suriano was a huge part of it. 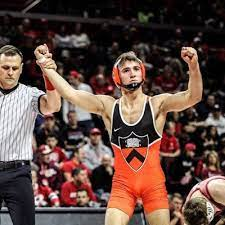 You get your rear handed to you 19-6 in the EIWA finals by Vito Arujau of Cornell & then you come back a short amount of time later to avenge that loss 13-5 in the NCAA semi-finals. Is that intestinal fortitude or what? This isn't the first time something like that happened this season either. There are other examples throughout the year of guys getting beaten like redheaded stepchildren & then turning around and lashing it out against the same wrestler who had beaten them. This never used to be like this. Wrestlers used to "own" other wrestlers & I suppose they still do, but it's not like it used to be. Anymore the mentality has changed to, "You don't own me!"   What is the cause of this change? I think it's a lot of things. I don't think today's wrestler takes losses as hard as they used to. They're more resilient now.  Coaching probably has a lot to do with it. Good Coaching, to help wrestlers refocus, fix mistakes & come back from tough losses. I also think it's because we live in a day of overexposure. It's so much easier now to study opponents. Get film & really look for weaknesses & holes in an opponent's techniques and strategies. Glory made the finals & it was glorious.  So cool to see an Ivy league program with this kind of success. Brains & pains I say & I'm all for it. 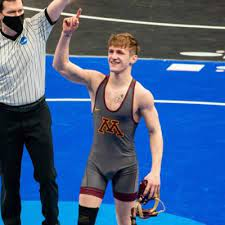 Move over J.D. Bergman, you have been replaced. Pat McKee of Minnesota is our new King of the Consolation.  There's something about a first round match that just does not agree with the young Golden Gopher but by George is he a Juggernaut through a series of brick walls once he gets put into the consolations.  Not only did he win 6 matches in route to a 5th place finish, he went out and dominated.  Intestinal fortitude.

I refer to this young man as "Kill Lion" because that's the exact way Killian Cardinale of West Virginia wrestles. He goes out and puts it all on the line. Competes like his life depends on it. That's fun to watch. Came up short of his goal of being an All American, but still what a fantastic season. BIG XII champion, 2nd at the Southern Scuffle. He has one more season left & I'm already excited about it. 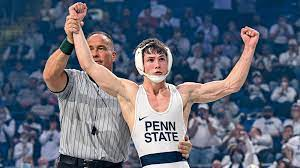 My heart really goes out to this guy, it really does. Look, I've lived in Iowa my entire life. I grew up an hour from Iowa City. I've lived in Iowa City. If there's anything I know well, I know how harsh your own fan base can be on you. I've seen former Hawkeyes & even current Hawkeyes get verbally torn to shreds by the black & gold faithful for not living up to expectation. When you're part of a storied program, unfortunately as Perry White would say, "it goes with the territory."  I know how rough some of the blue & white were on Hildebrandt for underperforming. I know that if I were to train 100%, technique, lifting, conditioning, ect that at my very, very best my greatest hope in a DI collegiate wrestling match would be to last the entire 7 minutes.  Yet I guess a lot of critics I read & listen to would go out there and make it look easy.  Better people than me I guess. I know that I myself can be very critical & unforgiving at times of poor sportsmanship. Hildebrandt may not have had the best season, but he wrestled a career & mind you a successful career at that. 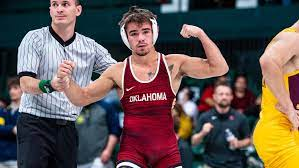 Here's a guy that fought injuries & trying to make the varsity lineup most of his career. Tenacity is a word used often in the sport of wrestling & for good reason. What an end it would have been for Joey Prata of Oklahoma to have ended his career as an All American and man oh man did he come close. So painfully close. Nevertheless, one match shy of placing. All things considered a great finish. 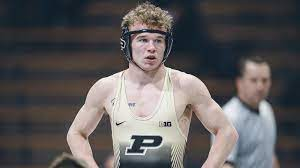 This will be another guy I miss seeing around next season. I've always been a fan of Devin Schroder's.  Not the ending to his career he was wanting but again, these guys don't just wrestle 3 days, they wrestle an entire season. All 6 months of it. Furthermore they wrestle entire careers & I'd say Schroder had a pretty good one. He made the BIG 10 finals twice & he made the CKLV finals twice. I know I'm probably the only human being on the planet who will say this, but the NCAA's in a lot of ways is just another tournament. It may be the most important one. It may be the toughest one. But to put all of your stock on it? To look at your entire worth of a wrestler & base it all on the NCAA tournament? No, I'll claim sanity here & call everyone else crazy. There are some very good wrestlers who never made All American. Schroder's one of them.

Is there more I could say? Oh yeah, a lot more.  All I know is that while Suriano graduates, as does Prata, we're looking at 7 returning All Americans & three R12's who all return for the 2022-2023 season.  Plus mind you, Iowa's Spencer Lee may be making a return too.  The War never ends & it never gets any easier.

Posted by Stephen Stonebraker at 9:21 PM