Is it the wolf defending his spot on top of the mountain or the wolf climbing the mountain who is hungrier for success? I think we saw examples of both here at 165 lbs in NCAA Division I wrestling. The bright & vibrant determination of youth ready to claim their stake & the steadfast tenacity of experience hellbent to defend theirs. That makes for some exciting wrestling. 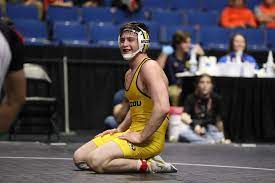 I cannot get over how good some of these wrestlers are today. I thought at the University of Missouri between 2-2-1-1 Ben Askren & 1-5-1-1 J'Den Cox, we were looking at the two best in Tiger history, but along comes Keegan O'Toole. If he keeps it up, he'll surpass both of them. 3rd as a freebee, national champion as a freshman. He has three seasons of eligibility left. 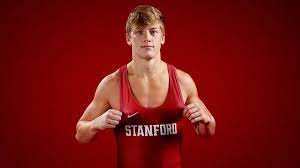 I have so much admiration for a guy like Shane Griffith. At a non-traditional wrestling school, one where he had to fight tooth & nail to save the program. There has been so much negativity in concerns to California collegiate wrestling. California has been hit harder than any other state when it comes to dropped wrestling programs. The positive that he has done & the positive that he continues to generate are nothing short of commendable. 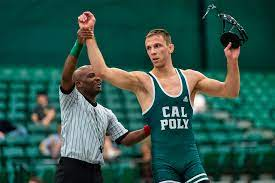 Speaking of positive things happening in the state of California for collegiate wrestling, Evan Wick has helped breathe life back into the Cal Poly Wrestling program. When you've witnessed Cal State Fullerton, UC Davis & Fresno State in more recent times all ax their programs & then you get on Twitter to read that Life Pacific just announced their discontinuation, it makes fighting pessimism a challenge. Yet you see all of the improvements & dedications at Cal Poly and it gives you a reason to be optimistic.

My heart goes out to Evan Wick.  Wrestling is a sport where you have to continuously prove yourself again and again.  It's not like football where you get to beat a team once & determine that you're the better.  He defeated Shane Griffith three times during the season, but lost to him in the NCAA semi-finals.  For himself, for his team & for the state of California which needs all of the representation it can get, he came back to a very strong third place finish.  Redundancy works in this situation, nothing short of commendable. 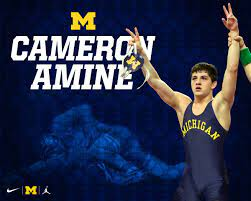 "You must show no mercy, nor have any belief whatsoever in how others judge you, for your greatness will silence them all." Jim "Warrior" Hellwig.

When Cam Amine of Michigan took 7th at last year's NCAA championships a lot of doubters were more than happy to call it a miracle run, questioning if he could do it again.  He shut them up in a hurry didn't he? Not only did he do it again, he did even better. A lot better!  He's got three seasons left too! 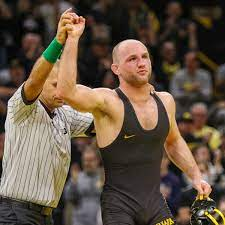 I've been around Iowa wrestling my entire life. My first exposure to collegiate wrestling, was Hawkeye wrestling. I know the way a Hawkeye wrestler thinks. Chad Zaputil doesn't think of himself as a three time NCAA finalist. He thinks of himself as a guy who lost in the finals three times. He doesn't see three silver medals, he sees three medals that aren't gold.  It'll haunt Alex Marinelli till the day he dies that he never won a national title. I know better than to ever think that's a thought that won't in one way or another make its way through his mind on a daily basis.

Yet he referred to himself as a champion, and he is. He is on and off the mat. The BIG 10 title is the toughest conference title to win in all of collegiate wrestling. He won that title four times. No one can take that away from him & it is one of the greatest accomplishments in wrestling.  6-7-R12-5, I'd call that a pretty good career. 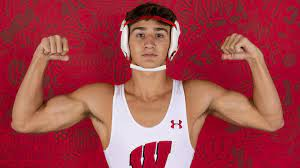 Man, there were so many great freshman this season, but I tell you what, this D.J. Hamiti of Wisconsin is something else. He's a true freshman too! I am just so impressed with this kid. Only four losses all season, two to Marinelli, one to Griffith & one to Amine. If he stays healthy, I think the sky is the limit for this guy. I mean this kid was in high school this time last season & he majors a return NCAA finalist to make All American status! Who does that?   I was a fourteen year old kid when I came up with the name Johnnythompsonnum1 just shy of my 15th birthday. I think if I were fourteen right now & looking for a good moniker to go by, DJHamiti#1 might be what I go by.  Love watching this guy on the mat. 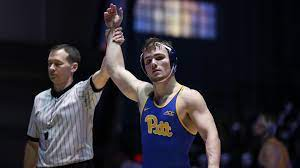 I'm gonna miss watching Jake Wentzel of Pittsburgh compete. He was one of those guys that often had the ability to turn around losses. Just because you beat him a time or two before, doesn't mean that you'd beat him again. Finished one match shy of being an AA this season after making the NCAA finals last year. It's a tough tournament. 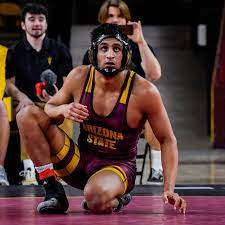 He'll never be remembered for being as good as he was.  In the years to come, the name Anthony Valencia will be shelved and forgotten. That's one of the reasons why I've never been one of these people to put all emphasis on the NCAA tournament. It's why I cringe when I hear, "All that matters" or any rendition of the philosophy.  He's so much more than the "Only made All American once" label that he'll be stuck with the rest of his life.  Injuries had a lot to do with it, but he's one of those guys that you'll always look back on feeling woulda, coulda, shoulda.

We're spoiled as wrestling fans. It's really that simple. We're spoiled because of how insanely competitive this weight class is going to be in the future.  O'Toole, Griffith, Amine, Hamiti already mentioned throw in Carson Kharchal of Ohio State, Peyton Hall of West Virginia, + many more and you see how tough this weight class will be next season.

Posted by Stephen Stonebraker at 5:51 PM