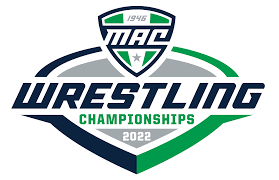 Well plain and simple, no excuses, time got the best of me & I wasn't able to put together a full preview for today's MAC championships. For that I apologize.  Hopefully what I can provide this morning is a decent consolation prize.  Here are what I feel will be the best R1 & potential Quarterfinal matches. Keep in mind the QF matches might not happen. They have a high probability of happening, but this is wrestling, upsets are NEVER out of the question.

A lot could be riding on this first round match up.  The MAC unfortunately only got one allocation at 125 lbs, so any hope for an at large/wildcard bid would have to come from a runner-up or possibly 3rd place finish. (No offense to either West or Ferri, but don't see either one upending Anthony Noto of Lock Haven).  Both Ferri & West have been to the NCAA tournament in the past.  Ferri last season, West in both 2019 & 2021.  Head to head Ferri has won twice 8-6 & 9-6, with West owning a 4-3 match.  This will be a good one.

This will be a good match between two good wrestlers. The last time the two met, Rhone won a 10-8 decision in a highly competitive match.

This match heavily favors Eyler but Ho is one of those guys that seems to be able to turn it on when least expected. I would never overlook him & I would never count him out. In a world where guys put their lives on the line for the ultimate pinnacle of participating in the NCAA tournament, you gotta know Ho is looking to steal a spot here. Eyler will need to be on his toes.

Lehman has had himself a very, very respectable freshman season this year. 20-6 record.  Wohlabaugh on the other hand, has a losing 6-9 record.  The two have never met.  Yet, the very last thing I would do if I were Lehman is overlook Wohlabaugh. Here's the thing about him. Yes, he has a lot of losses, but a lot of those losses this season have been close matches.  3-1 losses to both Kyle Davis of George Mason & a 3-1 loss to DeAndre Nassar of Cleveland State. Stranger things have happened.


Now keep in mind these Quarterfinal matches are not guaranteed to happen. Yet they have a very high likelihood of taking place.  All things happen as they "should" first round, we'll see these matches.

Again in a weight class where only the champion is slotted to go the the NCAA's, every win is vital. This one will be a doozy.  Earlier this season when Bergelin & Sanchez met, Bergelin barely escaped with a 2-1 decison.

Looking very forward to this potential matchup. Believe it or not in the exact same tournament earlier this season (The Navy Classic) Hagan majored Willochell 13-2 & then later on Willochell came back to defeat Hagan 6-4. Talk about intestinal fortitude. A sign of good coaching & a good attitude, it takes a tremendous amount of mental toughness to turn a loss like that into a win.  I have been so looking forward to the rubber match between these to.  This is gonna be fun.

These two have never met. On paper Kinner, who is ranked, is favored to win this match. However, Ervin is far from a pushover. He was an NCAA qualifier last season & I think if nothing else, he'll give Kinner a good match.

Here is another example of a guy turning an ugly loss into a nice win. The first meeting between Robinson & Cheloni ended in Cheloni nearly tech falling Robinson 15-1.  Yet the second time the two met, it was Robinson who pulled off a 5-1 decision.  Last season Robinson shocked the wrestling world by making the MAC finals. An obvious sign of a wrestler who knows how to prepare for a conference championship. Yet I wouldn't count out Cheloni in this match. He was 3rd in the MAC last season.

You know maybe I shouldn't even be putting this here. There's a chance that Moore could go out there & just have his way with Komara and walk off the mat with a major decision.  Yet like Ho from Clarion, Komara is one of those guys that decides the best time to wrestle well is when you are convinced that he won't. Gotta keep that in mind.

We have two former NCAA qualifiers in a bracket with only two allocations duking it out for a spot in the semi-finals. Carida & Petite have wrestled twice in the past & both matches came down to who could get the one takedown. Both times, the answer was Carida in two 3-1 decisions.  Can he go 3 for 3, or will Petite win this one?

Ducca earned the allocation & he's seeded higher, but Davis is going to be a very tough opponent to get past.  Matter of fact, Davis owns two wins against Ducca already 10-7 & 4-1.  Ducca has defeated Davis 8-5.  This will not be one to miss.

The seeding in this tournament sure didn't do Lehman any favors did it? If he gets past Wohlabaugh in the first round, he turns around & has to face 2021 MAC 3rd place finisher Nassar in the Quarterfinals!  Some roads are certainly rockier than others.  Now if Wohlabaugh wins, Nassar still has a tough challenge on his hands. He's defeated Wohlabaugh three times, but all three of those matches have been very close.  3-1, 3-2 & 5-3 sudden victory.  Not to mention, a long time ago, Wohlabaugh majored Nassar 11-0.

Well there you have it! Hope you enjoy the first two rounds of the MAC championships today!
Posted by Stephen Stonebraker at 6:22 AM