This is just a plain & simple fun weight class, full of a lot of entertaining wrestlers who went out and put on exciting performances. That's sometimes we don't discuss much in the sport of wrestling. Wrestlers don't go out on the mat with the intent of entertaining us, nor should that be their focus. However, sometimes even if it isn't their intent, their performance is extremely entertaining anyway. I saw a lot of this in this particular weight class. 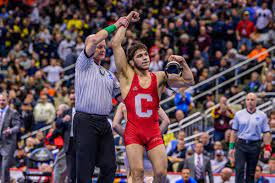 This guy has but one blemish on his entire career & I think when it is all said & done next season, it'll remain the only loss he had during his time in college. For people that consistently search for the next Cael Sanderson, that one loss has to just irritate the bejeezus out of them. Nevertheless, he's already one of the greatest wrestlers we've seen, & if he goes undefeated next season to a fourth title, that'll cement his already established legacy even more.  After watching what Kyle Dake did, I was certain that he'd go down in history as the greatest Big Red wrestler of all time. The argument can certainly still be made, but Diakomihalis is in a position to pass him.

Ridge Lovett had a phenomenal tournament didn't he? Mark Manning has been doing great things at Nebraska for well over 20 years now, season after season. I'd conclude that he is one of the most overlooked & underappreciated Coaches in wrestling today.  For Lovett to go from getting pinned at the BIG 10's in 20 seconds, to becoming an NCAA finalist is nothing short of amazing. The cradle he used to upset Tariq Wilson of North Carolina State was one of the most fun moves to watch of the tournament.   Thumbs up to both him & Bryce Andonian of Virginia Tech for giving us what was one of the most exciting matches in the entire tournament.  Both technically only sophomores, hopefully we see plenty of battles in the future between these two. 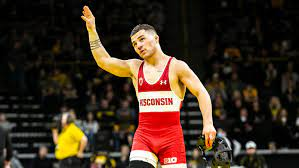 I was under the impression this was Austin Gomez's final season on the mat, but I've since been informed by others that he may have another year left due to all of the injuries he's sustained over his career. Whether he is back again in 22'-23' or this was his last season, either way it was rewarding to see him finally healthy so that he could wrestle a full season, win a BIG 10 title & make the NCAA award stand. 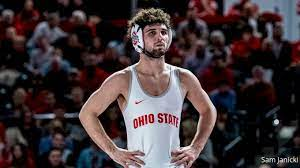 I swear to you I'm not going to talk about all 78 varsity wrestlers at 149 lbs, but it's hard to skip past anyone as this is such a fun weight class, full of vibrant characters, with incredible talent. Sasso too is technically only a sophomore with two more seasons of eligibility.  It just goes to show how this weight class will remain one to look forward to for quite some time. 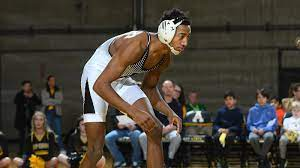 My hat is off to Jonathan Millner of Appalachian State, who for the second season in a row as more or less been the leader of the Southern Conference. Came back from a tough second round loss, all the way to a 6th place finish to become the conference's sole All American. 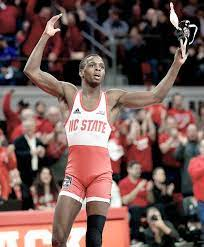 I will miss watching Tariq Wilson of North Carolina State compete. This guy went out and put on a show every time he stepped on the mat. I'm sure 7th wasn't exactly where he wanted to end up in his final NCAA tournament but just placing this season was an accomplishment in it's own right.  I've said it before & I'll say it again, 21'-22' is the toughest season I have ever witnessed in all of my years watching collegiate wrestling.  What I appreciated about Wilson most is that he could have gone out in his 7th place match & lollygagged around like some have in the past, but instead he went out & gave us fans one last incredible performance.  That's something I think we should all appreciate.  Dan Gable once said to me that he felt it was our duty to make wrestling as exciting & exhilarating for  the fans as possible.  Every match I ever witnessed of Wilson's, he did just that. 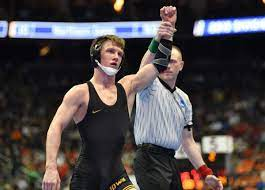 This guy has to get on the award stand next season, he just has to.  Three times the R12. Like Micky Phillippi at Pittsburgh, Iowa's Max Murin enters the 22'-23' season one of the best yet to be an All American next year.  His improvements and how much he's stepped it up a notch in my opinion have gone uncredited. He's made leaps and bounds over the past few seasons. The Max Murin of this past season, would major the Max Murin from only a couple of years back.  His only losses this tournament were to Champ Diakomihalis & Millner.  Next season unfortunately won't be any easier than this season was, but I hope it ends with Murin finally getting the medal that has thus far eluded him. 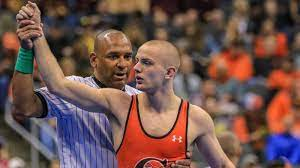 Life can be outright unreasonable and unfair sometimes.  After the controversy that many felt saw Josh Heil of Campbell get the raw end of the stick at last year's NCAA tournament, I was really hoping that he'd have a good tournament this season. It didn't happen.  He didn't earn an All American finish. I'll tell you what he did earn though. He earned his fifth trip to the NCAA tournament & may I also add that he became Campbell's first Mat Men Open Champion.  He did so by defeating Gomez 3-1 sudden victory. 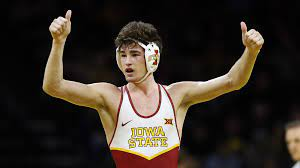 I was hoping to see Degen back on top of the heap again this season, but like last year, I felt like he was missing something all season. The weight cut, an injury, whatever it was something was off about him this year as it was last year. Again, maybe not the best end to his career, but still a successful career none the less.

Literally I guess I could probably say something about every wrestler in this weight class.  It was such a fun weight class this year & it'll be every bit as exciting next season as it was this season.  I've already mentioned a lot of the talent that will be back next season but believe it or not, there's so much more.  Even more than what I have pictured here.  I do know that I hope to see Josh Finesilver of Duke do well next season. The Blue Devil wrestling program is in a slump at the moment & they could use a huge positive like that.  Yahya Thomas of Northwestern, despite missing out on the award stand this year, is very capable of being an NCAA finalist next year.  Diakomihalis might be out of his league, but other than that he's capable of beating anyone at this weight class.  I'll say the same for Arizona State's Kyle Parco.


My last thoughts I'll share as to 149 lbs 21'-22' is how incredible it was to watch Kaden Gfeller of Oklahoma State make what I consider to be an incredible comeback. Last year did not end well for him at all as he finished 8th at the BIG XII's & failed to qualify for the NCAA's. This season he went 21-4 overall, winning the BIG XII tournament, finishing a match away from placing. If that ain't turning it around, you tell me what is.  Another one of the many overlooked, untalked about stories in college wrestling that I think deserves a mention.


Posted by Stephen Stonebraker at 3:16 PM