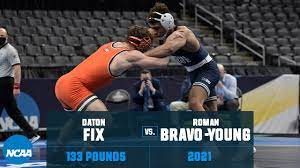 Penn State's Roman Bravo-Young defeats Oklahoma State's Daton Fix in the NCAA finals for the second year in a row.  RBY has stated that he's still not sure if he's going to come back next season or not. Personally, I'd love to see him back. It makes it difficult for any other team to overcome Penn State but I've always been of the mindset if you're going to beat someone, beat them at their best.  As to Fix, he's got the Duane Goldman thing going on.  He's now finished NCAA Runner-up three times in his career. With the COVID situation, he still has two more shots at an NCAA title. I think he'll get at least one. 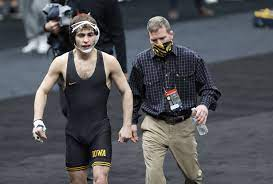 I have mixed feelings on this guy & I suppose I always will.  The heart this guy shows on the mat, as he goes out & gives 100%, 100% of the time is hard not to admire. His quickness, with a relentless attack, using one of my favorite moves; the fireman's carry was fun to watch. Yet you can't ask someone like me who values sportsmanship, class & humility the way I do to be a huge fan of a guy who rarely if ever displayed any.  I've referred to DeSanto as the Norman Bates Energizer Bunny his entire career & I had good reason for it. I think too many excuses were made for his behavior, when contriteness or in the least ownership should have been made instead. He's not the only wrestler to suffer from mental health issues. His may have been publicized & discussed more than others but he's far from the only wrestler to deal with these issues. I'll always admire the fact that he was their for his team & that twice in his career he came back to a 3rd place finish to help out the Hawkeyes. Some have fallen apart after the dream of being a national champion is gone & he fought back hard not once, but twice to take 3rd for the team.  If the quote, "You only deserve what you earn" is true, then it has to be true both ways.  He earned every bit of love & praise that he ever got, and he also earned every bit of criticism too.  Wrestling in a lot of ways can be a lot like politics & one thing I hate about politics is hypocrisy. I cannot stand it when someone will do something & it doesn't depend on what they did, it depends on what party they represent as to whether their action is held accountable or dismissed.  So it's either you were fine with DeSanto's unsportsmanlike antics whether he was wearing black & gold, maize & blue, blue & white or orange & black OR you weren't. I cannot play a game of "depends on who he competed for."  So final analysis is there are things I liked about the guy & things I didn't.  Earning team points in important duals & tournaments, wrestling his heart out was great. Yelling profanities at a teammates father, not so much. 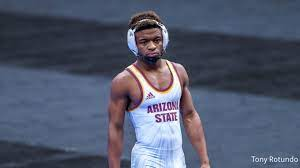 I tell you we talk about a possible third meeting between Roman Bravo-Young & Daton Fix (& to my knowledge this would be the first time in history that wrestlers met three years in a row in the finals IF that were to happen in 2023) but I think their may be a possibility that Arizona State's Michael McGee catches up to them at some point. This guy has steadily improved every season & if history repeats itself he'll be even better next season than he was this season. 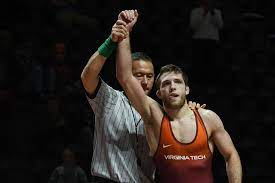 I was happy to see Korbin Myers get back on the award stand. He's been a fun one to watch. A textbook technician in a world so full of scrambles & wildness. Great career for the Hokies, he'll be missed. 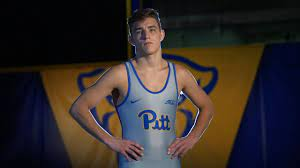 Mark it down on your calendars, Pitt's Micky Phillippi enters the 2022-2023 season as the best wrestler in the nation yet to make All American. R12 three times in his career. People talking about how much its gotta sting for Fix to bring home silver medals three times running, I think it's a honey bee compared to the bullet ant of finishing one match shy of an NCAA medal three times. I sure hope to see him finally make the award stand next season. 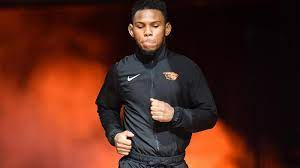 It was fun watching Oregon State's Devan Turner finally make the award stand. Isn't it ironic that in being a two time PAC-12 champion, it is the year he doesn't win it that he makes All American? That's NCAA wrestling for you. It should also be noted that Dylan Ragusin who defeated Turner 4-2 in round two, failed to place. I point that out as further proof of how difficult it is & how insanely tough this tournament can be. 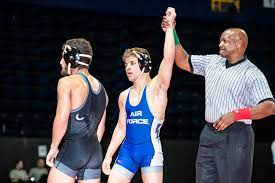 While I could say a lot more about 133 lbs in NCAA DI, I'll leave my thoughts on Air Force's Sid Flores. Dude's plain and simple a battler. Dealt with injuries last season & had to fight his way to an official varsity position this season. He wasn't expected to be an NCAA qualifier this season & after getting majored 8-0 in the opening round of the BIG 12 tournament come all the way back to a 4th place finish to earn NCAA qualification. Not all stories worth telling in this sport end with national titles. Plenty of other success stories & this was one of them.


Posted by Stephen Stonebraker at 3:37 AM