The Unique Story of Bill George and "Wake Forest Wrestling"

The history of Wake Forest wrestling is rather unique.  The school did have an official wrestling program for a short amount of time in the late 1950's.  Don Hipps coached the program for a couple of seasons from 1956 to 1958 and Clarence Peters coached from 1958 to 1960, when the program was dropped.  Not much is said and few records were kept during this short stint.  There is no record of wrestling on the official Wake Forest athletics website and no member of the wrestling team is in the Demon Deacon Hall of Fame.  Yet there is a wrestler in their Hall of Fame.  How does that work? Well....like this...... 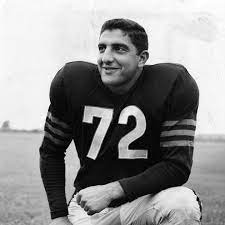 A native of Pennsylvania,  George was a standout on the gridiron as well as the mat for Waynesburg Central High School.  Offered opportunities in both football and wrestling post graduation, it seemed as if George's wrestling days were over when he chose to play football for the Demon Deacons of Wake Forest.  After all the small school in Wake Forest, North Carolina (Before it moved to Winston-Salem) didn't field a wrestling team.

Yet in 1948, a student and football standout at Wake Forest, Bill George headed north the nearly three hours to Lexington, Virginia and entered the Southern Conference Championships at HWT.   It's preposterous to think of someone doing that today.  The idea of a star football player of Georgia or Alabama or Cincinnati or any other school that doesn't field wrestling, entering a prestigious wrestling tournament. It's so foreign and bizarre that our minds have trouble accepting it.  Yet, that's exactly what George did.

Not only did George enter the tournament, he won it.  A guy without a wrestling coach, without a team, without prior matches on the year, won the tournament.  It's not even known if he trained.  Some have said that he did practice for a while at a local high school in the area, but I have yet to have that confirmed.  Even if he did get in some mat time before the SOCON championships in 1948, that is still an impressive accomplishment.

What's even more impressive?  He did it twice more.  He entered the championships in 1949, winning a second title and again in 1952 winning a third title.  You know what makes the title in 1952 even more noteworthy?   He had already been drafted by the Chicago Bears.  Now imagine that happening today.  The NFL drafting a player and he decides to enter a wrestling tournament post signing a contract. That would be a sight.

George went on to have a standout career in the NFL where he played nearly his entire career for the Chicago Bears. From 1954 to 1961 he was named Pro Bowl eight consecutive times.  Some called him the meanest player to ever play for the Bears.  His jersey was retired at Wake Forest.

Things were definitely different back in the 1940's and 50's than what they are today. There's no way something like this could happen in the here and now.  It's hard to believe that it even happened back then!   It makes one wonder though doesn't it?  We've had wrestlers who were also outstanding football players, who chose football over wrestling.  Everyone in a while we'll get lucky and get to see someone like Leonce Crump, Spencer Myers or Josh Hokit do both. Yet as demanding and challenging as it is to compete at two sports at the DI level, it doesn't happen often.  Most of the time an athlete is forced to make a choice.  Yet imagine if you will, someone like Austin Blythe randomly entering a wrestling tournament, not being an official member of the team.

I'm sure other stories like George happened throughout the history of our sport, but his is pretty unique.


Posted by Stephen Stonebraker at 3:34 PM