That's 8 of the top teams in the nation doing battle this Saturday.

Last year's NAIA champion Brandon Orum looks to take the top seed here, but you better believe he has a target on his back and Grand View's Portillo is the NR.1 Barrett M82 with his sights deadlocked, finger on the trigger ready to shoot.  Last season Orum upset Portillo in the national semi-finals & Portillo has been dying for a rematch ever since.  This likely final could not only be the match of the tournament, but the match of all collegiate wrestling this weekend.  Also in this bracket is #5 ranked Isaac Crowell the Pennsylvanian competing in the sunshine state who was 7th in the nation last season. He along with Millner and Horton look to place high in the tournament.

Predicting a final between Hudson and Taylor here.  Hudson was 8th in the nation last season at 125, while Taylor finished 4th at 133.  Should be a very good match.  Land who finished one match shy of All American status last season will fight with DeShazar and Wharton for 3rd place.

A rather loaded bracket led by NAIA runner-up Moore.  I'm seeing a semi-final between him and Ruffridge on one side of the bracket and on the other between Nickel and Leon, a rematch of last year's 7th place bout at the NAIA's which Nickel won by an 10-8 score.  Kelly and Sindihebura are both top 12 wrestlers at the moment who look to prove themselves as top 8. They more than have the opportunity to do so here.  Look for Silverstre, Bates and McGlamery to fight for a place on the award stand.


Remember how I said that this tournament was going to be like an NAIA national tournament before the NAIA national tournament?  I meant what I said.  This weight class is L-O-A-D-E-D.  We could see a rematch of last year's NAIA final between Bond and Stonecheck, in which Bond won by an 11-4 score.  However, we might not as Stonecheck could meet last year's NAIA 4th place finisher Latimer in the semi-finals, who he defeated in the NAIA semi-finals last year 9-6.  That's a match that could go either way.  Far from done, NAIA 7th placer Anderson is here. If that's not tough enough, think we also have Johnson in this bracket who was 3rd at 141 lbs last season.  Add in Brown who was R12 in the NAIA's last season plus Marvel, Souder and Hernandez.  If 149 lbs is competing on a mat, you'll most likely want to see the match.

UPDATE: Well, now the bracket is EVEN tougher believe it or not! I accidentally read something wrong and I had Grand View's Tanner Abbas at 157 where he was 6th in the nation last season. Looks like he went down a weight to 149.  As if this weight wasn't tough enough already!


A lot of great talent in this weight class.  Smith was 4th in the NAIA championships last year, as Ohl placed 5th.  Now up two weight classes Margolis (sorry about the spelling above) was 3rd at 149 in the NAIA last season.  Not 100% sure how the seeding will go but a semi-final between Margolis and Ohl or Margolis and Smith either way is going to be a good one.   Look for Koontz, McNutt and Sellmer to be your other place-winners.


Predicting a final between Eichert and Randles, who met in the NAIA quarter-finals last season where Eichert won an 8-2 decision. Randles came back to take 3rd place, while Eichert was one of the few people to give Graceland's Brennan Swafford (Now at Iowa) a match in a 10-7 loss in the finals.  A strong candidate for 3rd place here is Sallah who finished one match shy of All American status, but he'll certainly have plenty of challenge from Bryant, Tenety, Swank, Sellers and James.

#1 seed here I would imagine will go to Lee who after a first round loss at last year's NAIA championships battled all the way back to a 3rd place finish.  #2 seed most likely Hadwan, although I think the guy that could win this bracket is Richardson. Richardson is who defeated Lee in the first round at the NAIA's last season by a score of 5-2.  He himself finished one match shy of All American, while as mentioned Lee came back to take 3rd.  You know that has to leave a bitter taste in Richardson's mouth.   Also in this bracket is Jacobs, who also finished one match shy of All American last season.  Add in Rypel, Starke & Perovic and we have ourselves a very competitive bracket.


Watching Lanham dismantle North Carolina's Max Shaw who is still ranked in the top 30 among NCAA Division I was enough to make me question if anyone will challenge the Running Eagle this season.  He'll certainly be tested here.  In this bracket with him, is Mayer who finished 7th to Lanham's 3rd at the NAIA championships last season.  Braun himself before transferring to Southeastern was an NCAA Division I qualifier for Northern Illinois.  With wins over many top DI wrestlers including Andrew Davison of Northwestern, Greg Bulsak of Rutgers and Matt Wroblewski of Illinois, we could be looking at Lanham's greatest threat.  Braungardt and Henderson will also be looking for spots on the award stand.

Like 157 lbs, this truly is like a mini-NAIA tournament.  Last season at the NAIA's Hagan defeated Johnson in a tiebreaker rideout in the semi-finals.  Hagan finished as the NAIA runner-up, while Johnson came back to take 3rd. This could very well end up our final in this tournament and it'll be every bit as tough of a match.  Also in this bracket we have Pryor who finished 6th at the NAIA's last season along with Pierce and Faglier who were both one win shy of All American status.  Add in Powell and Jarvis, and we have ourselves a barnburner of a bracket.

As you can tell this is going to be an extraordinarily tough tournament full of some great action!  One of the best NAIA tournaments of the season! 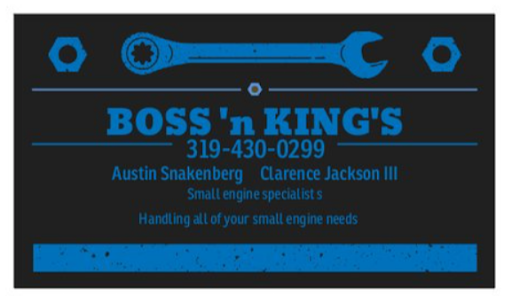 This post was brought to you by Boss'n King's.  From lawnmowers to weed wackers, to snowmobiles and snow blowers get all of your small engine repair work done at Boss'n King's. Serving the Iowa City, Coralville, North Liberty and surrounding areas.

Posted by Stephen Stonebraker at 12:59 PM