Entering the 2020 BIG 12 championships with an 0-0 record, Air Force's Cody Phippen opened up some eyes as he took it to four time NCAA qualifier Christian Moody of Oklahoma in a 10-3 decision. He then upended three time NCAA qualifier Jay Scharm of Northern Iowa 4-2. Unfortunately he would drop his next two matches and end up in 5th place.  Even though he had defeated both Moody and Schwarm, who placed 3rd and 4th, the lack of matches on the season saw Phippen not awarded NCAA qualification, while those two made it to the tournament. 2021 ended in a similarly heartbreaking fashion as the BIG 12 ended up awarding the top six at 125 lbs NCAA qualification, while Phippen finished in 7th place.

Looking over his resume and the talent that he has defeated, it is obvious that Phippen is one of the best wrestlers in the nation yet to make it to the NCAA championships.  He doesn't plan on staying home this season.  When the mats are rolled out in Detroit on the 17th of March, he'll be their competing on them.  To ensure his success, he has made some changes this season, including moving up to 141 lbs.  I had the privilege of being able to talk to him about these decisions.

I was cutting a lot of weight to stay at 125. I wasn't having any fun and I wasn't enjoying wrestling because the focus became all about cutting weight.  I talked it over with my coaches, my teammates and my parents and decided moving up to 141 was the best decision. I have the frame for it and it allows me to focus on wrestling, have fun and enjoy it.

What in terms of lifting and nutrition did you do in order to make sure that the weight you were putting on was going to benefit you at 141?

Now that you have experienced what it takes to move up weight classes, what advice would you give to other wrestlers thinking about bumping up?

If you are cutting a lot of weight and not enjoying wrestling because of it, then I would consider it.  Realize though that it is going to take a lot of work and discipline. You have to dedicate yourself to it.  There is no slacking off.  It's making sure you're get your lifts in and you're eating the proper food, getting the right nutrition.

141 lbs in the BIG 12 is rather loaded.  Eight already in the rankings, with four others gunning for NCAA qualification.  How do you feel about such tough competition?

It's the BIG 12.  It's going to be tough no matter what.  I've been wrestling the bigger guys, getting used to 141.  I train to where I know I can compete and defeat anyone.

A lot of it has been mindset. Making sure that I go in with the right amount of confidence.  It's not just going in holding on, hoping to win but going out to score as many points as possible.  I've been working on getting better in positions, especially on my feet.  I've been working hard on getting more offensive.  My goal is to dominate and score.

Now that you've put on a ton of muscle, are you able to lift alongside Hutchison and Hendrickson in the weight room?

I'm getting there! Give me a couple more years and I will.  (Said jokingly with a laugh) Those guys are weak!

As you can tell from this photograph, Phippen has spent a tremendous amount of time in the weight room.  His back and shoulders are far wider than they were last season and the definition gives a clear indication that the weight he has put on is all muscle. 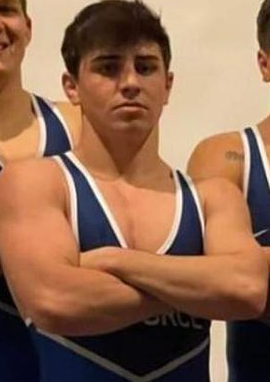 This recent team photograph helps to illustrate how much bigger he is now than what he was a year ago. Not sure what the gun laws are in Colorado, but it's clear that Phippen is going to need a license.

Phippen is yet to be ranked at 141 lbs, but it won't take long before the BIG 12 and the NCAA both know that he's a force to be reckoned with.

Posted by Stephen Stonebraker at 8:30 PM