If you're the type of person who enjoys an evenly matched dual full of matches that could go either way then this is the dual for you! 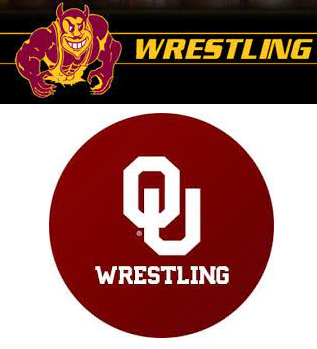 The last time the two met, McGee took it to Madrigal in a 13-3 major decision.  I don't think that will happen this time.  At the moment the two are only separated by two spots in the rankings and I think Madrigal shows the massive improvement he has made in this match.  Upset McGee? He wrestles like he did at the Michigan State Open where he upset Illinois' Lucas Byrd and Michigan State's Rayvon Foley, that is a very real possibility.  We're looking at a good match here.

This is one that highly favors the Sooners on paper, but again one that I think will be closer on the mat.  Vasquez showed with an impressive title at the Mountaineer Open that he's going to turn out to be a point getter for the Sun Devils.  Do I see him getting a victory over Demas? No, but I do think he'll keep the Sooner to a decision. Might even keep the Sooner to a point.

The way Parco looked at the Mountaineer Open, I wouldn't blame anyone if they were to call for a major decision, but I've seen Mitch Moore in action enough to know that he'll be up for this match.  I wouldn't call this a tossup, Parco is highly favored and I think he'll win without much of a threat, but I only see a decision.

This match is an oddity. Teemer was an All American last season and he's ranked quite a bit higher than Thomas. However, he's 0-2 against Thomas.  As quick and relentless as Teemer is on the mat against a majority of his competition, Thomas has been able to shutdown his offense each time the two have met.  Winning decisions of 8-4 & 6-2 scores, Thomas crowds Teemer giving him no space for his go to outside shots, capitalizing upon his mistakes. It's a strategy that has thus far worked twice against the Sun Devil.   I think either way you sort of have to call this one an upset.  Thomas wins, he beats an All American, ranked higher than him.  Teemer wins, he finally beats a guy who has frustrated the heck of out of him the last two times they've met.

Six matches into previewing this dual and this is the first time I think we'll see domination on the mat.  Major, tech or fall, Valencia will score bonus points for the Sun Devils in this one.

I'm not sure how much betting is actually going to be going on in NCAA wrestling this season, but I would imagine that Mantanona has to be a bookie's worst nightmare. The safe bet on this one would be to go with Valencia, but as bad as Mantanona can look in one match, he can turn around and look phenomenal in the next.  He might walk out of this match losing 14-0 or he might walk out with his hand raised. This match could mean bonus points for the Sun Devils or it might mean decision points for the Sooners.

In all 10 matches of the evening this is the only other one where we'll see a dominant victory. This time the major, tech or pin will go to the Sooner.  There's no reason at all why Robert shouldn't get bonus points for his team in this one.

The last time these two met it came right down to the wire with Norfleet winning a 4-3 tiebreaker.  The Sun Devil is ranked a couple of spots ahead of the Sooner and winning this match will be as good for his confidence as it will be for keeping or even improving his ranking. He was one win shy of All American last season, whereas Woodley finished 6th.  This is a very important match for both of these guys and it might very well come down to the tiebreakers once again.

Heindselman recently shocked me with a 3-2 loss to West Virginia's Michael Wolfgram.  I would expect that with a loss like that Schultz would come in here and just take it to Heindselman, but that's also what I thought would happen the last time the two met.  Instead Schultz squeaked by in a rather uneventful 3-2 decision. So who knows what will happen?

We have a heck of a good dual here.  Lots of "What if's" and lots of tossups.  Will be a fun one.

Posted by Stephen Stonebraker at 5:41 PM