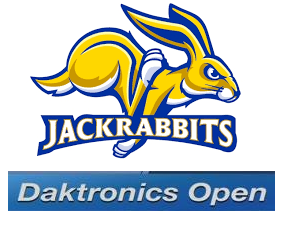 Another fun little tournament that will take place tomorrow is the Daktronics Open hosted by South Dakota State.  Featuring #8 Minnesota, #12 Nebraska, #17 Northern Iowa and #25 South Dakota State, we will see many matches between ranked opponents.


The parity that is 125 lbs could very well show itself to be alive and well in this bracket. McKee looks to defend the title he won he two seasons ago but he'll have competition against either Teske or Cronin in the finals.  McKee defeated Teske 9-2 in their only meeting, yet lost 8-1 to Cronin in their only meeting.  Jordan lost a major decision 11-3 to McKee earlier this year, so don't see a major upset out of him but he's a good candidate for 4th place.


Another weight class where I don't necessarily think the outcome will reflect the seeding.  Thomsen through both ranking and result has more than earned the top seed here.  He's defeated Gliva twice by convincing scores of 10-4 and 9-1.  Gliva who through ranking will probably take the #2 seed, will have difficulty making the finals as the last he and Skudlarczyk met, it was the Panther who had his hand raised in an 8-3 victory.  Look for Biscoglia to also perhaps make some noise.


And yet another interesting bracket where the seeds might not reflect the outcome.  Red is the clear favorite here but being a home tournament on a home mat, he'll more than have his hands full with Carlson.  Yet on the same hand, Carlson barely squeaked by Bergeland in earlier competition in a 4-3 decision.  Bergeland himself recently defeated teammate Polanco 6-4 sudden victory in a saga that is far from over, while Red owns a tight 4-1 decision over Polanco himself.  Add in Happel and we have ourselves a fun little bracket.


Lovett sure looked good in his 4-3 victory over North Carolina's Zach Sherman didn't he? Unfortunately in a sport like wrestling there is little time for celebration as you soon find yourself back on the mat having to prove yourself again.  He needed double overtime to defeat Blockhus the last the two met in a 2-1 tiebreaker and Price gave him a decent match in a 6-4 decision.  Lovett will be challenged tomorrow.  Also in the bracket is Lara, who can also be very tough.


This is one of three matches I look forward to the most tomorrow.  Robb is currently on top of the world with his upset victory over NCAA champion Austin O'Connor of North Carolina.  If he can make it two for two and upend Lee, then there's no denying it. Robb is a threat to the NCAA title this year and that in itself makes one wonder, what is Nebraska really capable of this season as a team? Match ain't won yet and Lee will be every bit as hard to overcome, if not harder than O'Connor was.


Going to guess that the #1 seed here will go to Cook, with the #2 seed going to Sparks and the #3 seed going to Yant.  There will be plenty of challenge along the way from both Wilson and Carlson.  Carlson recently dropped a 5-3 match to teammate Sparks at the Bison Open. As Carlson continues to challenge Sparks for the varsity position on the Golden Gopher lineup, Wilson looks to fight his way back into the rankings.


Labriola is the top dawg here and I don't see anyone challenging him.  He's a Case International lawnmower and the rest of the field is grass.  He's already defeated Krattiger twice by scores of 10-4 and 9-3 and he owns a 17-7 major decision over O'Reilly.  DeVos looks like a good candidate for his finals opponent, but Lance Runyon ( I mistakenly wrote Austin Yant) as well as Krattiger will both give him challenge. For that matter so will O'Reilly who DeVos defeated in a close match, 3-2.


The second of three matches I look forward to tomorrow is the likely final between Keckeisen and Venz. Thus far both Lovett and Robb have pulled off huge upsets, why not make like his teammates and pull off a huge upset of his own?  I said earlier this season in my Northern Iowa preseason preview that Keckeisen bar injury, death or sickness is going to go down as the greatest wrestler in Panther history.  Granted he has the unfair advantage of a fifth year of varsity eligibility but honestly I don't know if he'd need it. This kid is going win at least one national title if not more before his career is said and done.  Venz in his own right was an All American as a freshman, who has finished one match shy of the award stand twice since.  He's got a chip on his shoulder and isn't from Keebler or Nabisco. He wants his name said, he wants it written, he wants it thought when people contemplate about who is going to win 184 this year.  A win over Keckeisen achieves that goal

With that out of the way, let me say that I feel the consolation final here will be between Salazar and King, giving King an opportunity on his home mat, in front of his home crowd to defeat a ranked opponent.


Three for three, this is the third match that I really, really look forward to tomorrow.  Now, I've been wrong before, and I'm more than willing to admit it. Crow has been a dish, I've had for breakfast, lunch and dinner. So I may be wrong here, but I think this potential match between Schultz and Sloan turns out to be much different than the last. Not picking a winner, but we aren't going to see the 13-4 slashing Sloan gave Schultz last time they met. I think this one is going to be super close. Talking overtime or even tiebreaker close.  It's hard to believe as good as both of these guys are & as much as they've accomplished outside of the NCAA tournament, that neither has yet to be an All American.  A lot on the line for both of these gentlemen.


I guess it goes without saying that the real fight here is going to be for runner-up honors.  Both Lance and Nevills have gone the full seven minutes with Steveson before, but I wouldn't be surprised if every match that he's in doesn't end early. Seeding of course will make a difference on who places what, but among the three others listed here, I think they're fairly even. Nevills is ranked lower than both Lance and Isley, but he does own a 3-1 sudden victory over Isley.

Posted by Stephen Stonebraker at 6:05 PM