I've never felt that NAIA wrestling has gotten the respect that it deserves.  I've had some long conservations on this subject with former William Penn assistant coach Ryan Groom and it seems that NAIA always takes a backseat to NCAA DIII, whenever the discussion comes up.  Sometimes it should, but other times it shouldn't.  Sometimes NAIA is as tough or even tougher than NCAA DIII, but it never gets the recognition. NCAA DIII always gets the nod, even at times when it clearly shouldn't.

I don't expect anyone to ever compare NAIA to NCAA DII and only a fool would compare NAIA to NCAA DI.  Yet to be placed below NJCAA and CCCAA? That's just plain insulting. Severely disrespectful to the talent that the NAIA produces and what these wrestlers are capable of.  Yet, as the saying goes, prove it.  Right?  Isn't that how points are made? Put your money where your mouth is?

I think Life later on today is doing just that as they head into Chapel Hill to take on North Carolina. By almost all accounts the Tar Heels are a top twenty team in NCAA Division I wrestling and last year's NAIA champs want to see how they can do against them. 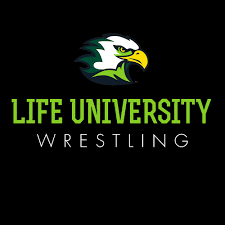 Do I see the Running Eagles defeating the Tar Heels?  No, but in 10 matches I tell you what I do see. I see two likely victories, two possible victories and one match that could be far closer than anyone else will care to predict.


125 - I see NAIA Champion Brandon Orum starting things off strong for the Eagles and getting a decisive victory over his Division I opponent.  I wish that Heilmann was still at 125, so that Orum could really be tested. I don't know if anyone is going to care about a victory over Spencer Moore.  Maybe Orum could bump up to 133 to take on Hernandez, but I don't know if he has the size to wrestle competitively 8 lbs up. Nevertheless, it'll still be a win for the Eagles, putting points towards the team score.  This could even be a major decision.

149 - I think Zach Sherman is a Darkhorse candidate for the NCAA title this season. I said as much in my North Carolina preseason preview. Do I also think that 2021 NAIA runner-up Denver Stonecheck can stay with him in a full seven minute match? Yes, I do.  Beat him? Probably not. Keep it to a decision? Yes.  If Stonecheck can go out on the mat and give Sherman Hell, I think that in itself takes words and puts them into action.

165 - I think an experienced senior Sid Ohl can take a redshirt freshman Sonny Santiago.  I don't feel as confident about this match as I do with Orum over Moore, but I still think this ought to be a win for the Eagles. It'll be an earned victory over the California state champion and Ohl will have to earn every point he puts on the board, but he can pull it off.

197 - Here's the other test.  An even tougher one than at 174.  Can Zane Lanham, a NAIA 3rd place finisher, currently ranked 3rd in the NAIA possibly defeat Max Shaw? Shaw an NCAA qualifier last season, is currently ranked in the top 25.  This would be another huge victory for Life that doesn't have a huge probability, but it does have a chance.


Can Life pull off four victories in this dual?  A major decision with three decisions?  That'd be 13 team points against a top 20 team in NCAA Division I wrestling.


I think Life has an opportunity here to prove themselves and prove the NAIA worthy of the respect and recognition I know is deserved.  Let's see what happens this afternoon.

Posted by Stephen Stonebraker at 4:58 PM