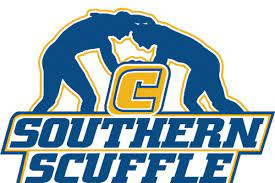 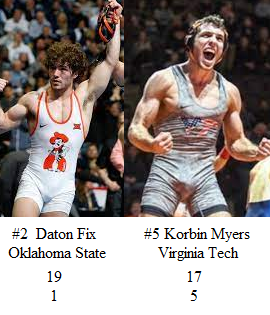 At 133 lbs in the Scuffle we have a clear #1 and a clear #2, at least on paper.  Oklahoma State's Daton Fix, who already owns a Southern Scuffle title is the favorite. While he's had to settle for silver in two NCAA tournaments, here he'll find his gold.  His only viable competition will come from Virginia Tech's Korbin Myers, who in his own right has been pretty dominant against the competition.  Very confident this is the finals match we will see.

If you study the place-winner candidates of this weight class it really helps to illustrate and give forth testimony to just how incredibly tough it is to even make the varsity position of a Division I school.  For example, Jamie Hernandez of North Carolina is a candidate for a Scuffle medal, but honestly so is his backup Joe Heilmann.  Same can be said for North Carolina State's Kai Orine, who has a high probability of placing. So does his backup, Jarrett Trombley. Hell, look at Sean Russell of Appalachian State, his backup Sean Carter took 7th place at the last Scuffle!

As he continues to adjust to the 133 lbs weight class Rayvon Foley of Michigan State who was an All American a few seasons ago at 125 lbs will continue to climb that rankings ladder. I cannot see him defeating Myers and I can't even fathom the idea of him defeating Fix, but I think he can be as good as 3rd here.

Then there is "Take a" Chance Rich of CSU-Bakersfield who every season thus far has always had shining moments.  Two seasons ago he stuck Sammy Alvarez of Rutgers (who went on to win the Southern Scuffle later on that year ironically enough) & last year he upended All American Michael McGee of Arizona State at the PAC-12 championships. It's inevitable that he's gonna do something of note again this season & the Scuffle is a place to do it.

Others to watch for...

Posted by Stephen Stonebraker at 6:28 AM