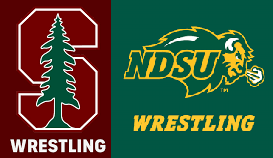 This PAC-12 Vs BIG 12 dual will give us wrestling fans a glimpse into the strategy of a dual mindset Vs a tournament mindset.  Many  wrestlers from both Stanford & North Dakota State recently competed in the Southern Scuffle and it'll be interesting to see if the results match up or differ in the dual.


So many factors go into the wins and losses of wrestling matches. Jackson DiSario has his work cut out for him Thursday night as he'll have already faced a tough Hunter Leake of California Baptist before he even steps on the mat with McGwire Midkiff. What the Cardinal has going for him is that he's defeated both Leake & Midkiff in the past. a 7-2 victory over the Lancer & an 8-3 decision over the Bison.  While DiSario was eliminated earlier in the tournament, Midkiff missed out on Southern Scuffle placement by a mere 3-2 loss in the blood round.  I'd say how DiSario fares against Leake will be a huge determinant for his match with Midkiff.

This one highly favors the Bison & if Droegemueller starts letting it rock on top, it could spell m-a-j-o-r.  On the same hand though, Miranda can be tough when he wants to be & could surprise the home crowd by keeping this one close. Not seeing an upset, but I am seeing what could be a respectable match.


Now here's a match I'm very anxious to see.  I'm taking back some 25+ years ago to days on the elementary playground. You have clearly beaten someone in a game of P-I-G but of course after the last basket, your opponent demands that you "prove" your shot by making it again. That's what collegiate wrestling is. A constant game of having to prove yourself over and over again. What happened last week, might as well have happened 100 years ago. Once you step on the mat, all that matters is the here and the now.


Doesn't matter whether it's Daniel Cardenas or Charlie Darracott, either way, Jared Franek has himself a worthy challenger. The Southern Scuffle Champ squeaked by Darracott 3-2 in the semi-finals, as Darracott came back to place 5th as his teammate Cardenas placed 3rd. It'll be interesting to see who Stanford sends out on the mat.  Do they give Darracott who came so close a second crack at the now #2 ranked wrestler in the nation? Or do they go for the element of surprise & give him a Cardenas that he has never faced before?


A rematch of the Southern Scuffle finals.  Mikey Caliendo gave Shane Griffith a great match in a 3-2 decision taken by the Cardinal. You know Caliendo is going into this dual smelling an upset. Ready to pull off what would be known as the biggest upset of Thursday night & probably the biggest upset of the week. At the same time, Griffith is going into this with the attitude that no one is coming into his house, and taking anything away from him. Here's your match of the night guys.


Here's where the dual mentality Vs the tournament mentality could really come into play. If you look at the history of Tyler Eischen's collegiate career thus far, you'll notice that he's much more of a tournament wrestler than he is a dual wrestler. He was able to manage a 7th place finish at the Southern Scuffle, in comparison to Sax's R12 finish. On top of it, he defeated Iowa State's Julian Broderson in that 7th place match, who in turn kept Sax off the podium with a 3-0 decision.  What does all of this mean? It means that per ranking & quality wins, Eischens goes into this match favored. With that said though, I wouldn't count Sax out.


Here we have the opposite of what we have at 174.  Owen Pentz won the Southern Scuffle title, while Nick Stemmet finished in 7th place. On paper, this one easily belongs to the Bison, although on the mat it may be a different story. What makes Pentz such a dangerous threat is that he's a pinner. He can literally put you on your back from any position. The key to wrestling Pentz is very simple. Stay off your back.  Much easier said that done, when your opponent doesn't experience Winter, Spring or Summer because he has so many falls! Stemmet last the whole 7 minutes, I think this match could actually favor the Cardinal.


Fun dual, be sure to check it out!
Posted by Stephen Stonebraker at 8:23 AM