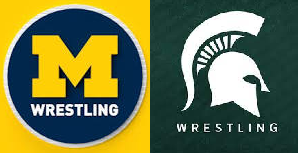 There will definitely be some good matches in this in state rivalry between the Wolverines and the Spartans.  Dual to take place Friday (1-13-2023)


This will be a good match between two talented lightweights. In all sense of reality, Jack Medley Vs Benny Gomez would be just as good of a match I believe, but I'm pretty sure we're gonna get McHenry Vs Lujan. McHenry is 7-5 at the time, compared to Lujan's 14-1 record, but sometimes competition speaks louder than results & overlooking the two records, I'd say McHenry's faced the stiffer schedule. This one, I'd call a toss up.


This will be the rubber match between two All American candidates at 133 lbs.  Ragusin owns a 3-1 decision over Foley & Foley owns a 7-2 decision over Ragusin. Taking place in East Lansing, I'd give a slight advantage to Foley, as this one too is a toss up.


On paper this one definitely favors the Wolverines, but I predict it'll be much better on the mat than what it is on paper. Hamdan is currently 19-5 on the season, with two of his losses being the result of an injury & two of his other losses being very close. Do I see him beating Mattin? No, but I do see him giving him a respectable match.


Even more so than 141, 149 favors the Wolverines. This match is kind of hard to predict because Peyton Omania is an unpredictable wrestler. There's one Peyton Omania that could go out on the mat & get absolutely destroyed by Chad Lamer.  There's another that could go out and go toe to toe with Lamer. Not knowing which Omania we'll get on Friday night makes for what could be a very fun wrestling match. It also makes trying to foresee the outcome difficult.


While I think Michigan State can be in both the 141 & 149 matchup, here's where I think they can pull off an upset. Lewan has beaten Saldate on three occasions, with the last two being rather close 3-1 & 3-2 decisions. If the Spartan can keep the matches that close, there's no reason to think that he might not be able to pull off the upset. Especially in East Lansing.


The first time these two met, it was all Amine scoring an 11-1 major decision.  While Fish still wasn't able to generate any offense in meeting #2, it was much closer with Amine scoring a 5-1 decision. With this dual being in East Lansing, in front of the Spartan crowd, it'll be interesting to see if Fish can make meeting #3 even closer.

If you haven't noticed by now, there's a pattern going on here in this dual meet. Michigan is favored in all of the marquee matches of the evening, but there's not a match here that Michigan State can't be in if each wrestler brings his A game. That certainly applies here. Matt Finesilver will be heavily favored, but Layne Malczewski can hang with him. Can, being the operative word. Will? We'll see.


Posted by Stephen Stonebraker at 5:58 PM