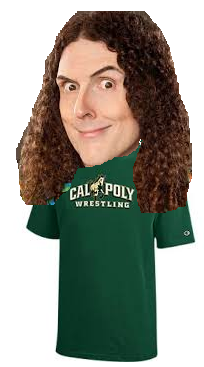 I think someone ought to try and make a wrestling fan out of Weird Al Yankovich because if he loves parity like he loves parody, then wrestling is the sport for him! This sport is just wild. Upsets left and right. A wrestler wrestling horribly one week & wrestling like a God the next. A team looking lackluster in one dual & then looking like Headhunters in the next. I don't really follow any other sport other than baseball, so I'm not the person to ask, but I do wonder. Is any other sport as difficult to predict in respect to its unpredictable nature as is wrestling?

Let's take a look at what happened this past week....


It was another good weekend for the Oklahoma Wesleyan freshman as he upended 2022 NAIA qualifier Kyler Adams of Midway 8-5 in the finals of the Central Baptist Invitational. The California native had Daniel Cormier as his coach while in High School & you can see a bit of that in him as he competes.


In my estimation of course. All four of these guys Logan Johnson of Avila the champion, Kaleb Clark the runner-up, Chad Sakamoto of Oklahoma Wesleyan 3rd & Alejandro Mas of Central Baptist, have so much in common. They all fall into the category of four of the best wrestlers yet to qualify for the NAIA's.  As far as I'm concerned all four are NAIA qualification material & I expect to see all four fight hard to earn that qualification. Sakamoto continues to be himself. Gets pinned in 5:16 early on by Mas & then comes back through the consolations to avenge that loss 4-3. I've said it about him before & I'll say it again now. Once this guy learns consistency, he's gonna be really good.

First off my apologies to Rio Grande.  I've been saying the name of the school wrong! I always thought it was Rio, as in "Ree Oh" but Aaron Swayze informed me that it is Ry as in Ryan, Oh.  My mistake.  What I do know is that freshman Justin Bartee looked very good this weekend.  Excellent 4-2 sudden victory over 2022 NAIA qualifier Braeden Baller of Texas Wesleyan.


Granted Cade Willis already defeated 2021 NCAA DIII champion Alex Friddle of Coe 12-1 at the Luther Open, but it is noted that he defeated him again this weekend 3-1 for a Cliff Keen Mike Duroe title.
A great weekend for UW-La Crosse's Noah Leisgang as he defeated Chicago NCAA DIII All American Darian Estevez 2-1 tiebreaker for a Al Hanke Invite title.


John Meyers defeated opponents from both Cleveland State & Michigan State as he won a championship at the Purple Raider.


For the first time in his career, Dorian Crosby of Bucknell has a winning record & he earned it in fashion! A 2-1 victory over three time NCAA qualifier Zachary Knighton-Ward of Hostra.


The nation's oldest wrestling program gave the nation's most successful wrestling program (historically speaking) a great fight this past week. The Columbia Lions are for real & proved themselves to be a team to be taken seriously as they wrestled the #15 Oklahoma State Cowboys very tough. Nick Babin scored a huge 6-0 victory over Trevor Mastrogiovanni, as Matt Kazimir pinned Carter Young in 3:43 & Josh Ogunsanya nearly majored All American Wyatt Sheets 10-4.  Even in losses, Cesar Alvan & Lennox Wolak wrestled tough.

Rather unique circumstances this week as the Miller brothers of Maryland, Kal & Ethen had to wrestle both the Rooks brothers of Indiana (Cayden & Graham) as well as the Hagan brothers (Alec & Kyran) of Ohio! I wonder how many times this has happened in wrestling history? Where in the same weekend a set of brothers wrestles two other sets of brothers. I'd wager to say that this is a pretty rare occurance.  Kal was able to get Cayden 6-4 in sudden victory, but Ethen lost to Graham 5-3.  They both won close, hard fought matches against the Hagans as Kal defeated Kyran 5-3 & Ethen defeated Alec 2-0.


What a great week of wrestling for Braxton Brown. The Terrapin just mauled through the competition as if he hadn't been out to sea in a while & everyone he stepped on the mat with looked like a tasty jellyfish.  It was a 9-0 major decision over Jacob Moran of Indiana.  Then it was a 9-4 decision over Anthony Moulton of Campbell, followed up with another 9-0 major decision over Virginia's Patrick McCormick. He then stuck Oscar Sanchez of Ohio in 3:30, defeated Oklahoma's Joey Prata 4-1.


Remember how I said at the beginning of the post that some wrestlers wrestle like garbage one week & then turn around and wrestle great the next? Few resemble that remark better than David Key. He did NOT look good at the David Lehman Open at all last week, but he looked exceptionally good this week! He pinned Oklahoma's Keegan Moore in the first period!  He also defeated Virginia's Neil Antrassian 8-6.  In the words of Ben Stein, "Wow."


A nice win for South Dakota State freshman Alek Martin, as the Jackrabbit nearly majored 2022 MAC champion Kody Komara 9-3. He's had some other notable wins this season, but I would call this his to date best.

I had a feeling after watching him give Shane Griffith a great fight at the Southern Scuffle that it'd be tough for the Cardinal to overcome the Bison once again. We already have three NCAA champs at this weight & it looked like no one else was gonna break through and be part of the discussion. Keegan O'Toole of Missouri, David Carr of Iowa State & of course Griffith. Yet Caliendo wanted to let the three know that there are other names to consider & his is one of them. He upended the 2021 NCAA champion 6-3.


I predicted that the Cornell Vs Lehigh match was going to be a much closer dual than the rankings suggested and indeed it was. In fact if it weren't few a few unexpected results, the Mountain Hawks may have even upset the Big Red. One of the main factors in Cornell's victory was a huge win out of Cole Handlovic, who pulled off a 2-0 victory over Max Brignola.  He came into this match with a 4-5 record, having lost his last two matches. Took a lot of courage & intestinal fortitude to step up & win this one for his team.


Sometimes it's possible to see good things in a wrestler even if they don't win. Matt Olguin may have taken a loss to Princeton's Quincy Monday, but he gave the 2022 NCAA runner-up quite the scare. Took him into the tiebreakers and dropped a heartbreaking 2-1 decision.


Finally released and now officially a Husker, it is rather ironic that he dropped two matches this weekend. Granted they were to very tough opponents. Nevertheless, what I'm anxious to see is if Kyle Burwick is the official starter, or if Nebraska simply wanted to put him in the driver's seat for a while. He's 2-1 against Dryden, and the last two matches between the two have been rather close. Even though he can no officially suit up for Nebraska, it doesn't necessarily mean that the spot is his. Dryden is an extremely tough opponent & who ever is in this spot come BIG 10 tournament time, will have to have earned it.


Burwick wasn't the only story to come out of Lincoln this weekend.  Dayne Morton may still have a losing record on the season, but the Northern State transfer scored a huge 5-4 win over three time NCAA qualifier Michael Blockhus of Minnesota.


Of course as it is every week, it is rather debatable, but I think it's hard to beat Jack Crook over Zach Sherman. The Harvard freshman who now has a .500 record, defeated the Tar Heel All American 7-5.


Illinois must have awoken the giant that had been asleep at the University of Iowa. For the first time in a long time the Hawkeyes looked like the golden era Gable squad of year's prior. Even in the matches they lost, they went out and fought. There wasn't much of the conservative, afraid to try something timid behavior. It was the go out and take it to em' attitude that both Terry and Tom always wrestled with back when they were tearin' it up in the collegiate ranks back in the early 90's. Real Woods just took it to Frankie Tal-Shahar 17-2. Then Cobe Siebrecht stopped a redhot Trevor Chumbley dead in his tracks, 6-3. That was the biggest win of his career thus far as far as I'm concerned.  Yeah, Max Murin lost a 3-2 decision to Yahya Thomas, but someone as good as Thomas is gonna be hard to beat four times in a row. Hoping we see this battle at least once, if not twice more this season.  Then Zach Glazier against Andrew Davison of Northwestern. I think if this match had taken place before the Midlands, Glazier would have won. Davison is a high, after having wrestled so well, he was gonna be hard to beat. Cassioppi found out that Lucas Davison wants his name in the discussion for plausible HWT champs, and he had to use every ounce of strength & energy he had to overcome the Wildcat in a 3-2 efford.

I did not think he would pin Michael DeAugustino.  I really didn't. Especially not in the manner that he did. Yet he made it look like a junior high match, as he just flipped him over in a cradle & stuck him at the 2:01 mark.  What can you say to this?  Lee is just that good.

I'm beginning to wonder if Lee might be able to win his fourth title this season in ultimate fashion. I'm talking pinning his way through to the NCAA title & winning the Gorriaran in the process. I can't think of a more dominating way to go out & that premonition is actually closer to reality than it is to fiction. Lee is just that good.


Last notes on the week, although I could add two of three dozen more....

Iowa took the steam right out of Northwestern. You could tell when they dualed Nebraska.  Liam Cronin beat the crud outta DeAugustino 11-2, as Frankie Tal-Shahar had zero answers for Brock Hardy who defeated him 6-0.  Chris Cannon continued to look good, as Lucas Davision took out his frustration from not being able to upset Cassioppi by sticking Cale Davidson in only 43 seconds.
Posted by Stephen Stonebraker at 10:17 PM