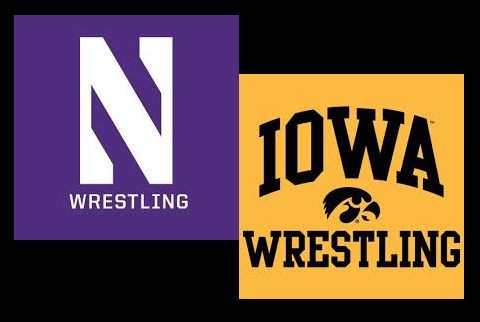 Iowa had a scare against Illinois this past week & then turned around and took it to Purdue. I say the 2022 Midlands Champions will be a good test for #2 ranked team in the nation. Other than 184, I think we have matches, all out fights at every weight.


Spencer Lee has already faced a couple of setbacks this season. I've always said the only thing that would slow him down in his final seasons would be injury, & we're seeing a bit of that now.  Against Jore Volk of Wyoming, he began to tire towards the end of the match, as he gave up two takedowns turning what could have been a technical fall into a 15-5 major decision.  Against Matt Ramos he gave up a takedown, followed by a 6 point throw, that saw him have to fight off his back. Down 8-1, a fire was quickly ignited, where he came back with a vengeance to pin the Boilermaker. Analyzing these two results, it tells me that DeAugustino could be his toughest challenge yet.  The key here for the Wildcat is to last the whole 7 minutes & keep the score as low as possible. Lee's gas tank I would imagine still isn't on full, and wearing him out would be the one opportunity DeAugustino would have. Resilient and tenacious, the Hawkeye always finds a way to win. That's why he's a three time NCAA champion. It's simply now, he's not 100%.  Not at 100% he'll need to find a way to win against a very worthy opponent, who will last the whole match. I don't see him pinning DeAugustino.

Whether Iowa sends out Schriever or Teske, I say this one favors the Wildcats.  Two time NCAA DI All American Chris Cannon is a bit inconsistent, but when you put him in a challenging situation, he usually finds a way to win. Being in Iowa City, wrestling in front of what could be as many as 15,000+ Hawkeye faithful, is the one advantage the black & gold have going into this match. Many fans are saying that what Schriever's career needs most is a victory over a top tier opponent. Cannon would be a top tier opponent. A lot riding on the line for both Cannon & Schriever as well as for Teske if he makes a return here. For Cannon, a win here could help put Northwestern in position to potentially knock off the Hawkeyes.  For Schriever, to prove himself to the high expectations of his fans. For Teske, to show coaches, fans & the administration he was worth the trade after all.


This is the match we want to see, so this is the match I'm gonna talk about.  Frankie Tal-Shahar is looking to redeem himself. He entered the Midlands, favored to be among the top place-winners & he left his own tournament empty handed. You know that has to be eating him alive. He's looking to do something to bring himself back up to status & knocking off Real Woods would be just that something. Much easier said than done.  When he's competed, Real Woods, has looked Real good. Three tech falls, a fall & a major decision in six matches. Yet he didn't compete against Illinois & he didn't compete against Purdue. So he could be coming off an injury or an illness, which in turn favors the Wildcat if he does step back on the mat Friday night.  Against any of Iowa's backups, FTS should handle with relative ease. I'd say no less than a major.  Against a hungry team, already on a high after winning their first Midlands team title, Iowa could really use a healthy, ready to go Woods.


Here's the match of the dual my friends. We have two of the contenders looking to make the NCAA finals by season's end going head to head. A Wildcat who was 3rd in the nation two seasons ago & a Hawkeye more determined than ever after coming up short three times in the blood round. Thus far Murin has managed to stay one step ahead of Thomas in three extremely close matches. 4-3, 4-3 & 6-5 decisions for the Hawkeye. Thus could very well be the most important match as well. An opportunity for Northwestern to close the gap on Iowa & at the same time an opportunity for Iowa to keep Northwestern at bay.


Trevor Chumbley has been on fire as of late. The Wildcat is currently 17-2 on the season & currently on a high after winning a Midlands title & upending Brayton Lee of Minnesota 8-4 in a dual against the Gophers. It's vital for the Hawkeyes for Cobe Siebrecht to figure out a way to slow down the Wildcat & stop his momentum, but at the rate Chumbley is going, good luck. Would be a great win for the Hawkeye, no doubt about it, but this one highly favors Northwestern.


Bonus points can be so essential in dual like this, and here's where Iowa could pick some up. 4 points for a major Vs 3 points for a decision may not seem like that much of a difference, but once you start adding up all of the team points, suddenly it is. Kennedy is going to want that major & he's more than capable of getting it against both Mayfield & Ferrante.  With that said, I know enough about David Ferrante to know that if it is him that gets sent out onto the mat, he has the ability to keep this match within 7 points or less. It's really a battle of the wills here. Iowa looking for the major & Northwestern looking to avoid it.


Iowa isn't going to want to go 1/2 or even 3/4 on this one. No sir, against a dangerous wrestler like Troy Fisher, Iowa is going to want to go full Nelson. Full Nelson Brands that is. Brands entire career he's been up and down, & this is a time where he's gonna need to be up. He's goes into this match anything other than prepared, Fisher will make him pay for it. The Wildcats know that in order to even stand a prayer's chance against the Hawkeyes, they will need to pull off a few upsets. This is probably a weight that they're looking at to do just that. If Iowa can not only win this match, but we see the Brands that once majored Taylor Venz of Nebraska 13-5, then Iowa widens the gap keeping Northwestern out of reach.


Mental toughness is such an important aspect of this sport. Having confidence & believing in yourself and your abilities is crucial. The first time Jacob Warner & Andrew Davison met, it was an 11-2 major decision in favor of the Hawkeye. I don't think meeting #2 will reflect meeting #1.  Davison needed something of monumental stature to happen in his career & placing 3rd at the Midlands recently was just what the doctor ordered.  Warner on the other hand hasn't looked like what you would think an NCAA DI runner-up would look like. He seems tired & sluggish on the mat. Do I think that Davison could possibly upset him? No, I don't. I still think that Warner will win this match, but I don't think he'll stomp a mudhole in Davison like he did last time. I think this match will be much closer. From a team standpoint that could bode very well for the Wildcats. I don't see a major here. I only see a decision.


When Iowa sits down to evaluate Tony Cassioppi's top competition for the season, I imagine the names Greg Kerkvliet & Mason Parris come up rather regularly. I'd hope that the name Lucas Davison comes up as well. If it doesn't, it ought to be. The last time Cass & L Davison met, the Hawkeye took a solid 7-3 decision. Since that time, Davison has put on a ton of muscle & in terms of power & strength, he'll match Cassioppi i for i, t for t.   As far as I'm concerned Lucas Davison's name belongs in the discussion for those making a run at the NCAA title. Here's his chance to not only prove it, but also be a hero in the biggest dual of the season for Northwestern.  For Cassioppi, it's his chance to really separate himself as a top contender.  Show Davison & Northwestern that there's a lot more distance between 3 & 4 than what anyone thought.

The fact that Abe Assad could very well score a fall at 184 lbs is what is really gonna keep Northwestern out of this dual. Be it Evan Bates or Jack Jessen, I just cannot see the Wildcats leaving the mat with anything less than having lost to Assad by major.  That will make a huge difference.

With that said, I can still see Northwestern walking out of Iowa City with there heads held high.  I've scored this a couple of different ways & the best I see it for NW is a 17-19 loss, which I think is very respectable for a team up against the #2 team in the nation.

Posted by Stephen Stonebraker at 11:33 AM