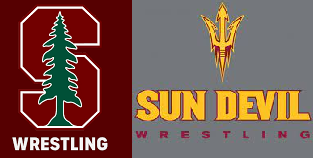 If you've been following Twitter lately, you're probably aware of the "Tweet War" that has been going on between Stanford Wrestling & Arizona State Wrestling. It's been quite entertaining as they've debated just about everything in a back and forth altercation. I even chimed in wondering which school had to suffer under a worse athletic director.  Was it the time when Arizona State suffered under the incompetent and clueless Lisa Love? Or was it more recently when Stanford had to battle the avarice of Bernard Muir?  Either way both of these historic and elite programs have had to battle just to exist & on Friday February 4th, the two are scheduled to do battle.

It's not likely, but it isn't 0% chance either.

If Logan Ashton can keep himself from getting tech'd or pinned by Brandon Courtney that's 4 points for the Sun Devils.

Jackson DiSario keep it to only a decision Vs Michael McGee?  That drives a hard bargain. I think there was a time this season when he very well could have, but McGee got on a hot streak late November & other than a loss to RBY of Penn State, he hasn't slowed down.  Nevertheless for the sake of theoretically speaking, let's say that DiSario keeps this match with 7 points or less. That's 3 points for the Sun Devils.

Charlie Darrocott keeping it to a major decision against Jacori Teemer?  I think this is actually a realistic expectation.  4 points for the Sun Devils.

The last time Kordell Norfleet and Nick Stemmet met about a year ago, Norfleet tech'd Stemmet right at the end of the match.  I think Stemmet has improved quite a bit since last season & I don't see Norfleet teching him again, although I do think we'll still see a major.  Another 4 points for the Sun Devils.

The key for Peter Ming is to stay off his back and avoid getting pinned by Cohlton Schultz.  Easier said than done when your opponent is a Greco-Roman aficionado who specializes in throws straight to the back. If Ming can keep himself from going to his back, then I think we're only looking at a major.  4 more points for the Sun Devils.

After 5 matches that will inevitably be won by the Sun Devils, we're looking at ASU with 19 points.  From where I sit, those points are accounted for & it's likely that ASU might score more team points within those individual matches.

Let's say they don't though and 19 is what they score.

That leads us to Stanford's two favored matches.

Real Woods would really need a fall over Ethan Pickren.  More than doable.  That's 6 points for the Cardinal.

Tyler Eischens getting a major over Zane Coleman?  A very realistic expectation. He owns wins over wrestlers that have already majored Coleman. No reason why he shouldn't be able to.  That's 4 points for the Cardinal.

Any of these tossup matches going Arizona State's way spell certain death for Stanford. The only way for the Cardinal to stay alive is to win all of them. Parco and Abas have never met & this should prove to be a classic. A likely PAC-12 final? Maybe. Legend Lamer of Cal Poly might have something to say about that.  Hard to believe that technically these two are still only freshmen.  What an epic feud we have to look forward to.

This one gives me anxiety.  Griffith certainly looked better against Cal Poly's Evan Wick than Valencia recently did, but going over Valencia's history, I wouldn't put all of my faith into that one result. Let's keep in mind that for the longest time, the only varsity loss Griffith had was to Valencia & that was a 7-1 decision in last year's PAC-12 finals.  Not only for his own sake, but for the sake of his team, Griffith will need to obtain sweet revenge in this one.

Neither one of these guys are ranked and this is what I absolutely frickin' love about duals! Neither of these guys are going to standout at the PAC-12's and I don't see either one being an NCAA qualifier this season.  Yet in this rivalry between Stanford and Arizona State, both of these guys have the opportunity to do something huge for their team.  Will it come down to this match?  Probably not, but it could.  Imagine if it did and the winner of this bout determined who won the dual.  Wouldn't that be awesome.  For Stanford's sake, Woods needs this decision.


So now we're going to envision that Stanford wins these three tossups.  That puts us at a tie score of 19-19.  Criteria wise, now we're looking into why Woods earning a fall at 141 is so vitally important.

From a realistic standpoint, I do think Stanford will put up a great effort, but this one is just to heavily in favor of DI's school with the hottest temperature on most given days.  Fun to play around with the #'s and speculate though.  Will be a very fun and exciting dual.
Posted by Stephen Stonebraker at 5:53 PM