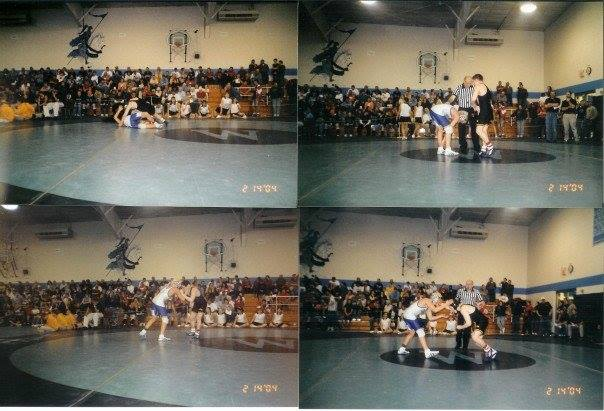 February 14th, 2004, 18 years ago as it was, is to this day one of the most significant moments of my life. A day that runs through my head every day of my life.  I think about it all the time.

It was the sectional tournament.  My final sectional tournament.  Thus far I had finished 6th-5th-4th & this was my final attempt to make it out of the tournament and qualify for districts.  By all means with a 5-4 & 11-10 loss the year before, I should have qualified as a junior too, but that's a story that's already been told.

My first match I had Kyle Carpenter of Wapello, who would go on to qualify for Districts in 2005.  I was able to pin him in the first period.

My semi-final match was against Daniel Garrett of Cardinal. An opponent I knew well.  In all my years of wrestling I can't say I was ever afraid of an opponent, but I was afraid of him. Matter of fact, I was scared to death of him.

As a junior I had wrestled him in the consolation semi-finals at the Van Buren Classic.  I had shot in on him and without much trouble at all, he whipped me over onto my back and stuck me.  I don't know why I let this strike such a fear in me, but I did.  Like a Cobra that stares into the eyes of its next meal before it delivers the fatal blow of venom, Garrett struck a fear in me like no other.

It made little sense.  In fact, it made no sense. The reality of the situation was that Garrett had caught me on a bad shot & pancaked me.  Yet, you couldn't convince me of that.

I had a 13-9 victory over Bartholomew. I had a fall over Ford. I had a 14-4 victory over Allison.  My loss to Bartholomew was 11-9.  Allison pinned me twice, but in both matches I was winning at the time I was pinned.  I only wrestled Ford once.

The second time I wrestled Garrett was again at the Van Buren Classic. This time for 3rd place.  I completely froze up and cowered.  I lost the match 6-1, allowing him two escapes and two take downs where I didn't even try and fight.  One was so pathetic that I should have been slapped after the match.  It was a simple snapdown where I immediately threw my arms at my sides to avoid the whip over from the year before.

I regret that match. It's one of the only matches in my entire wrestling career I regret.  Yet, I don't regret it as much as I do the match I had with him at sectionals.

They say that wrestling is 90% mental and while I don't know if that is always the case it certainly was that day.

I've never been more nervous and worked up for a match in my life.  I've never felt more weak, tired and worn out for a match.  Garrett knew I was ripe for the Pickens as did his coach who was well aware of my fear.

I lost that match 10-4.  All I could manage the entire time was an escape and a reversal towards the end of the 3rd period.  I came close to locking up a cradle, but time expired.

It wasn't about qualifying for districts & having a shot at maybe qualifying for state.  It wasn't even about winning.  It's about the fact that I let Daniel Garrett of Cardinal beat me twice. Now he might have won both of those matches regardless, but he shouldn't have won them for the reasons he did.

Now for anyone that thinks I'm trying to put him down, I'm not.  Garrett was a tough guy in his own right & I'll always say that. At Cardinal he ranks high in pins for both a season and a career.  I think he had close to 90 wins during his career. He was 3rd-3rd-2nd at the Van Buren Classic & I want to say he was 3rd-2nd-3rd at Sectionals.  No offense to him at all, I got a lot of respect for him. I just wish at the time I had enough respect for him to have given him 100%.  I wish he could have gotten me at my best.  Gotten me as I wrestled everyone else, fearless, intense and aggressive.  If I had wrestled everyone like I wrestled him, I'd have been lucky to have won a match.

After I lost to Garrett, I went and hid in the class room at WACO high school that we had been given to dress in.  I laid down on a bench and just went numb. I questioned my entire life at the moment. I thought of all of the mornings I had gotten up to go run, lift weights and drill. I thought of the times when my Dad had wanted to take us on a fun vacation but I said I wanted to go to wrestling camp instead. I thought of all the fun times with friends I had sacrificed so I could freestyle and do summer wrestling practices instead. Had this all been a waste of my time?

A short time later, Coach Kirby found me.  He came into the room.

"YOu still got another match to wrestle." He said to me.

I got up off the bench.  He patted me on the back as I walked out the room.

Normally I was a pacer. I would pace back and forth, shaking out my arms and getting myself loose.  This time I just sat on the corner of the mat until it was my turn to wrestle.

My opponent?  Brandon Ball of Columbus.

The first period, I was the aggressor, but I couldn't score any points. Nothing was going through my head as it was completely blank. I hit a nice headlock on Ball, but we were out of bounds when I threw it, so no points.

Then the first period was over and that's when one of Ball's coaches said something that brought me back to life.

"Come on Brandon, What are you doing? This guy isn't any good. Let's go."

I'm paraphrasing but it was something along those lines.

Let's just say that it pissed me off.

Second period began and as soon as it did, you can take proper technique and shove it, because I grabbed Ball by the head & had him flying through the air flat on his back with about 15 seconds. He fought hard as I squeezed and got the fall about 20 seconds later.

My entire wrestling career, all 12 years of it, I never celebrated a win. I did that one. I winked at Coach Milder & then pointed at the section of Sigourney fans for all of their support.

A million thoughts run through my head when I think of that day.  A million.  What I'd give to have that day over again. What I've give to have my entire high school wrestling career over again.

Posted by Stephen Stonebraker at 8:43 PM