Many have said that they felt that HWT was bar none the toughest weight class of the year.  It's hard to argue against that thought. Everyone has different measuring sticks & to me there be no greater test than to take a look at the talent that did not place.  Two time All American Trent Hillger of Wisconsin, All American & five time MAC champion Matt Stencel of Central Michigan, Big 12 champion Wyatt Hendrickson of Air Force, All American Tate Orndorff of Ohio State, plus more.  This was a tough bracket. 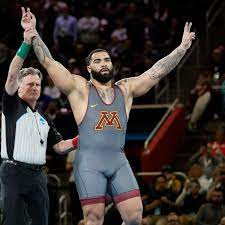 We were really spoiled getting to see someone like Gable Steveson compete weren't we? The testimony to how truly gifted the man was on the mat is how easy he made it look. These are the best HWTs in the entire nation, many with international success & he made it look like a cakewalk. If we made robots that could wrestle, I'm not sure if you could engineer one that performed at this Golden Gopher's level.

In the height of Gable's popularity I have to say that it astounds me all of the anti-professional wrestling posts & memes that I've seen pop up lately in various places. Steveson is going to the WWE & instead of crying the antiquated, "fake!" line that has grown so tiresome, maybe more of us could stand to embrace the positive that it will have on our sport. Of course all of us know who Gable Steveson is, but to the world outside of collegiate wrestling, the name might not be as popular as we'd like it to be. I guarantee you him being on WWE television & furthermore WWE Pay Per View got his name out there to the general public. People heard, "NCAA champion Gable Steveson of Minnesota" while they were viewing.  WWE helped to generate his name to millions of people across the country and the world.  WWE is going to make Steveson into a superstar. He's going to be the next Hulk Hogan, Stone Cold Steve Austin. You watch, give it 5 years and he'll be huge. Television shows, movies, the whole works.

Young men and young women will idolize him, wanting to be just like him. His background in collegiate & international wrestling will be brought up left and right. These kids will join their local wrestling teams because of it. I'm not asking you to suddenly tune into RAW every Monday night, but in the least realize the huge positive impact that will have on our sport. 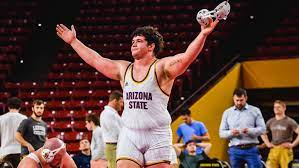 I think in the years to come it is very possible that we look back on the 2022 NCAA HWT finals & realize that we saw a match between two Olympic Gold Medalists. Perhaps I'm off my hinges but I don't think it's too much of a stretch to foresee Arizona State's Cohlton Schultz one day earning an Olympic Gold medal in Greco-Roman wrestling. His upper-body skills are already superb & he's going to improve.  4th & now Runner-up, he has the chance to be a five time All American. No guarantees for a national title though.  Stevesonless, HWT will still be absolute chaos next season. 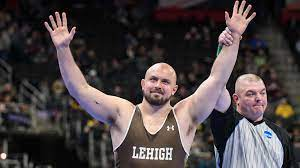 I'm gonna miss this guy.  The thing I love about watching wrestling the most, is guys with heart. Guys that go out onto the mat and win or lose, give you everything they have. That's the way Jordan Wood of Lehigh competed, and it was a treat to watch. He wasn't really in the discussions when fans sat around wondering who might meet Steveson in the finals, but when it was all said and done, he showed everyone that his name belonged. I've always been on the spirit that whether you strike out or you hit a homerun, swing that bat as if you're going for the rafters. That's exactly what Wood did. He may have came out on the losing end of the match with Schultz, but when that pitch was thrown he swung that bat like he was aiming for the moon. You gotta respect that.  Then he came back strong to a third place finish.  The EIWA's only 5 time champion, his place is forever cemented in the history books.

That parity amongst these three extraordinary talents is going to make the 2022-2023 season fun won't it?  I think all three of these guys have a shot at winning National titles, but all three of them have obstacles that they have to figure out.  Penn State's Greg Kerkvliet has Mason Parris figured out, but he can't figure out Tony Cassioppi.  Then Parris has Cassioppi's number, but can't get past Kerkvliet. Cassioppi can beat Kerkvilet, but can't beat Parris.  It makes for some interesting wrestling. History suggests that Kerkvliet is the most likely to make the necessary adjustments. This isn't a pro or anti statement to anything. This is simply a wrestling fan who watches and analyzes wrestling, taking what he's observed and studied over the years and applying it to a prediction. Penn State wrestlers have a history of overcoming obstacles like these.  That's not to say that Parris and Cassioppi won't. It's simply a matter of historical reference. 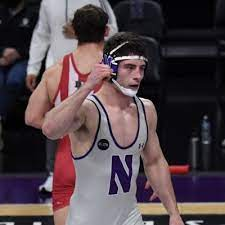 With as tough as HWT was this season, I wasn't sure if Lucas Davison of Northwestern had the size to compete with some of these monstrous behemoths. He more than proved that he did. He used his quickness and his long leverage to work his way into an impressive 6th place finish. With two more seasons left to go, I'm anxious to see where he fits in the next couple of years. 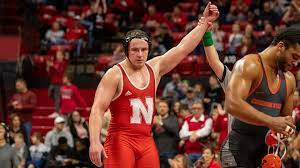 I said it before in earlier post and now I'm saying it again. Mark Manning had his boys prepared for this tournament and I don't think he's gotten anywhere near enough credit for it. Christian Lance came in, put his nose to the grind and wrestled himself an outstanding tournament. It's Hollywood idealistic to make your final appearance your best & that's exactly what Lance did.  He went out with his best performance yet.

Is there more I could say on HWT? Absolutely, there always is.  Next season is going to be fun  & I'll say right now that I think a big player might be Trent Hillger who I mentioned at the begging of this article. I think his problem might be size & I wouldn't be surprised if we didn't see him come back next season with a transformation similar to what Cassioppi had over last summer. Could be dead wrong abtou that too, don't know. I just feel that he has the technique, he just lacks the strength.  My opinion.
Posted by Stephen Stonebraker at 4:15 PM