Kansas: Either Reinstate Wrestling or Stay Out Of The BIG 10

The current talk and speculation, revolves around plausible changes to the BIG 12 conference. Some of the current members and affiliates, possibly leaving to join other conferences.

One of those teams is the University of Kansas. In discussing where they might go, there has been consideration for the BIG 10.

I guess to the rest of the world this may not pose a problem but it does to me I'll tell you why.

In the entire world of Collegiate sports in the United States, there is and has been only one conference where every single team has and always has had a wrestling program.

I don't mean only NCAA DI. I mean all of college. DI, DII, DIII, NAIA, NJCAA, CCCAA, and those other divisions that are rarely talked about.

Now some may point to the fact that the American Rivers Conference not only has that every school has a wrestling program, they also require it. That is true, but if you look at the entirety of the history of the conference, as in what it was before it became the ARC, you'll note teams that did but no longer have Wrestling.

As of today in NCAA DI, we have seven conferences for wrestling.

Then we also have five conferences that used to sponsor wrestling that no longer do.

The BIG 10 the only conference where every team has wrestling and has always had wrestling.

So my final analysis is, Kansas Jayhawks either reinstate your wrestling program or stay out of the BIG 10.

Reinstating would be a phenomenal choice. The state of Kansas produces a fair number of NCAA D1 talent, and it would be nice to see these kids have a place at home to wrestle. Although Kansas State has the better tradition, the Jayhawks did have success in wrestling as well. 5 BIG 12 champions and one NCAA runner-up.

If Kansas joins the BIG 10 and does not reinstate wrestling, then a history of 125 years comes to an end.

I guess I may be the only person on planet Earth that actually cares, but I feel like something needs to be said about this. So, I said it. 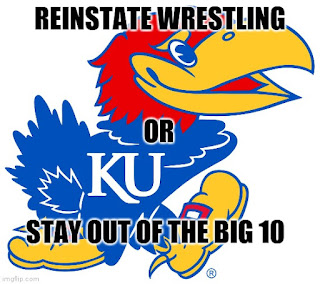 Posted by Stephen Stonebraker at 9:37 AM